Home News Can’t Afford a Mercedes Benz G-Class? The Suzuki Jimny Can Be Made To Look Like One

If there’s one vehicle which you don’t want sneaking up on you in the rearview mirror, it would be the Mercedes Benz G-Class. It looks furious and sounds that way too when it wears its AMG clothes. On the other, hand, if anyone ever thought of compressing the Gelandewagen, the new Suzuki Jimny, even in its factory-fresh avatar, would come close to looking like its gym-going German brother. But what if you want the Jimny to look exactly like the G-Wagen? 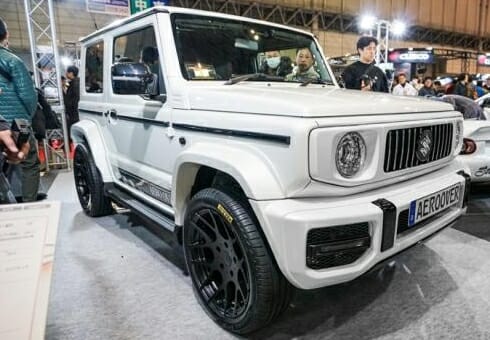 To make things clear, we came across a Japanese tuner Aeroover who designs body kits for several cars but this particular one caught our attention the most because the mod job is near perfect and comes very close to making this white Suzuki Jimny look almost identical to the G-Class. The body kit is very comprehensive and well thought out. The front houses a custom front bumper with daytime running lights. The front grille of the stock Jimny is very understated and is exactly opposite of the G-Class which is loud irrespective of the angle you look at it. The folks over at Aeroover have also designed a new front grille for the Jimny. The ORVMs are painted in glossy black with integrated turn indicators while we also see the use of custom side skirts to make the side profile look more in line with the G-Class. 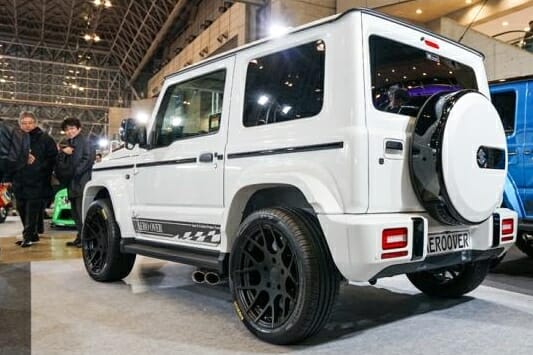 The fenders are 80 mm wider than before and provide the Jimny with those much-needed muscles. The rear end of this customised Jimny houses a newly designed bumper. If you have seen the G-Class from the rear, you would remember seeing a spare tyre cover with the three-pointed star logo on it. This particular addition makes way to this pimped-up Jimny as well. The stock exhaust of the Jimny would have looked puny as compared to that of the G-Class so Aeroover has developed side-mounted exhausts for it. 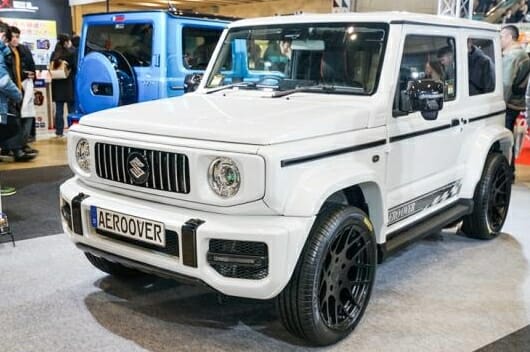 We don’t have any information regarding the mechanical changes made to this Jimny if there are any. In the stock trim, Suzuki Jimny is powered by a 1.5-litre petrol engine which is good for 101 bhp and 130 nm of torque. When you compare the specs of the Jimny with that of the G-Class, you would definitely appreciate the efforts put in by the folks at Aeroover because they are nothing alike! The Mercedes Benz G-Class in its G63 avatar uses an AMG-tuned 4.0 litre V8 Bi-turbo engine which makes 576 hp and an earth-shattering 850 nm of torque!