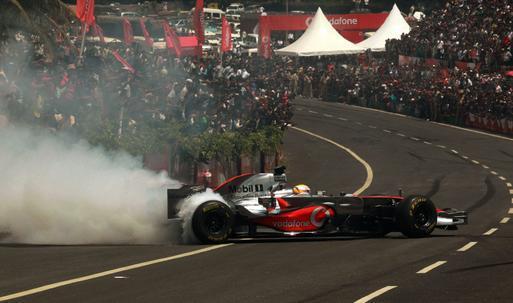 Red Bull looked to have had quite a  nice run in the start of the race weekend at Buddh International Circuit, Noida and their car missed the pole to Hamilton by just about half of a second.Drivers Sebastian Vettel and Mark Webber were seen to be all set to claim first and second positions in the final few seconds of the session but that was until Hamilton with his lightening quick 1m26.836s lap time saw the top slot as the chequered flag fell.

This achievement by the Brit racer was plagued with some suspicion that yellow flags had been waving when he clocked the fastest lap.Button’s McLaren was fourth fastest followed by Michael Schumacher and NicoRosberg in the two Mercedes.

Quite co-incidentally, it was Adrian Sutil in Force India’s car that was the first F1 car on track for the dry and sunny opening session. He was followed by none other than or very own Karun Chandhok.

But, quite shameful I feel of the fact that soon after the Force India cars got out on track, they had to make a pit top as the session was red-flagged due to a stray dog having wandered in to the circuit. We are used to stray dogs chasing cars out on streets but on an international racing circuit ? Unbelievable.

The session was resumed after about five minutes and initially it was Karun Chandhok and India’s popular racer Narian Karthikeyan who became rightful owners of the top spots. That was until ‘the’ Michael Schumacher came out and set a new lap time of 1m38.658s. Not being satisfied with this, Schumi managed to bring down the time by full four seconds within the next half an hour of the session.

Behind the top six was Felipe Massa, who was the seventh fastest in the only ‘good’ Ferrari with a new front wing. While, Sutil ended up eighth ahead of Buemi and Kamui Kobayashi.

Of the 2 Indians in the field, Chandhok was down below the timing charts at 19th fastest in his, but was ahead of Karthikeyan who was at 22nd.

Eventually Button emerged from the pit for a proper run at half distance moving the goalposts significantly with a 1m30.794s lap. This seemed to trigger a flurry of activity from the top men as Vettel also joined in. But the world champion’s attempt was scuppered by a trip off-track at the Turn 5/Turn 6 section – something that would happen to several drivers as they learned the new layout.

Fernando Alonso had to park his car as his Ferrari was plagued by an engine problem.

Hamilton moved to the top  lapping in 1m27.515s and Vettel too moved ahead of Button.

The last 15 minutes saw the Red Bulls move into their usual slot as Webber set a fast lap time of 1m27.428s, but then, the world champion made Webber’s joy short lived with a 1m27.416s and gained the second spot.