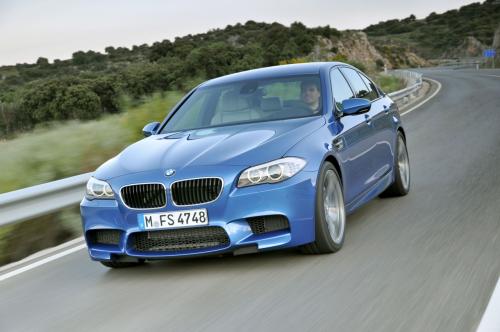 We all know that when BMW talks about unadulterated sports car with divine power and earth shattering torque, it talks in the ‘M’ language. BMW’s M3, M5 and the 1 M coupe BMW are already a range amongst driving enthusiasts who also want some practicality. All the M badged cars have one common link – their engines are propelled by gasoline, though their standard Non-M models which are the 3 series, 5 series and 1 series come with an option of a diesel power plant. BMW at long last is planning to offer the m5 with a diesel powerplant too.

Now if BMW packs the M5 with diesel there is one thing for sure that the earth shattering torque will be too hard to be handled by a two wheel drive so BMW will employ a four wheel drive system to the diesel M5. Engine is supposed to be the 3.0 lit engine which will have an all new,  path breaking tri-turbo technology which BMW is developing. Power output would hover around the 500hp mark but the torque will be in excess of 800Nm! The 3.0 lit engine will make use of a single, small turbo to help avoid lag at launch, coupled with a pair of larger twin-scroll units to augment power at speed.

Talking about the nomenclature for the diesel variant of the M5 BMW is said to adapt a new method. No news regarding that but they can follow the 1 Series M type name or BMW 550d xDrive M or totally something new.

Tell us what do you think about a diesel M5 and what should BMW name it ?