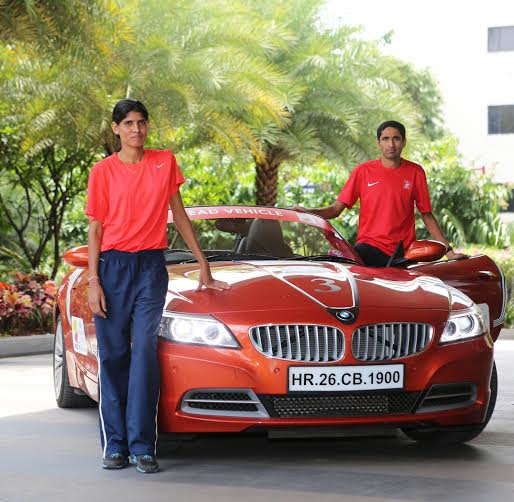 BMW, the official car partner of the TCS World 10K Bangalore 2014, led from the front, at the 7th edition of the world’s most prestigious 10K run. Upholding the dynamism and athleticism of the city, the run was held on 18 May 2014.

Mr. Philipp von Sahr, President, BMW Group India said, “As the ‘Official Car’ of the TCS World 10K Bangalore 2014, BMW is proud to associate with this spectacular event for the third consecutive year. BMW has a long-term goal: sustainable mobility. By perfectly combining sporty performance with the highly efficient use of energy, every BMW incorporates the great spirit of marathon – a quality that has made BMW the leading premium car brand. TCS World 10K Bangalore is the perfect opportunity for the residents of Bangalore to extend beyond existing boundaries and celebrate the joy of running”.

The BMW X1 was the lead car for the TCS World 10K run which commenced from Sree Kanteerava Stadium. The BMW Z4 was the lead car for the ‘Majja Run’. BMW India has been associated with all the major marathon events in the country over the last three years. Participating in these events is an extension of BMW EfficientDynamics philosophy, as a marathon runner has to ‘Run Efficient’ ensuring maximum endurance whilst maintaining speed and efficiency.

BMW Group India cheered the runners of the TCS World 10K Bangalore 2014 from exclusive cheering zones outside Sree Kanteerava Stadium and MG Road (In front of Mahatma Gandhi Statue). For over 25 years, BMW has partnered with major marathon events across the globe including Berlin, Frankfurt, Singapore and now India, to bring forth the EfficientDynamics philosophy. BMW EfficientDynamics has paved the way for groundbreaking technologies aimed at the reduction of fuel consumption and emissions; while at the same time maximizing performance.