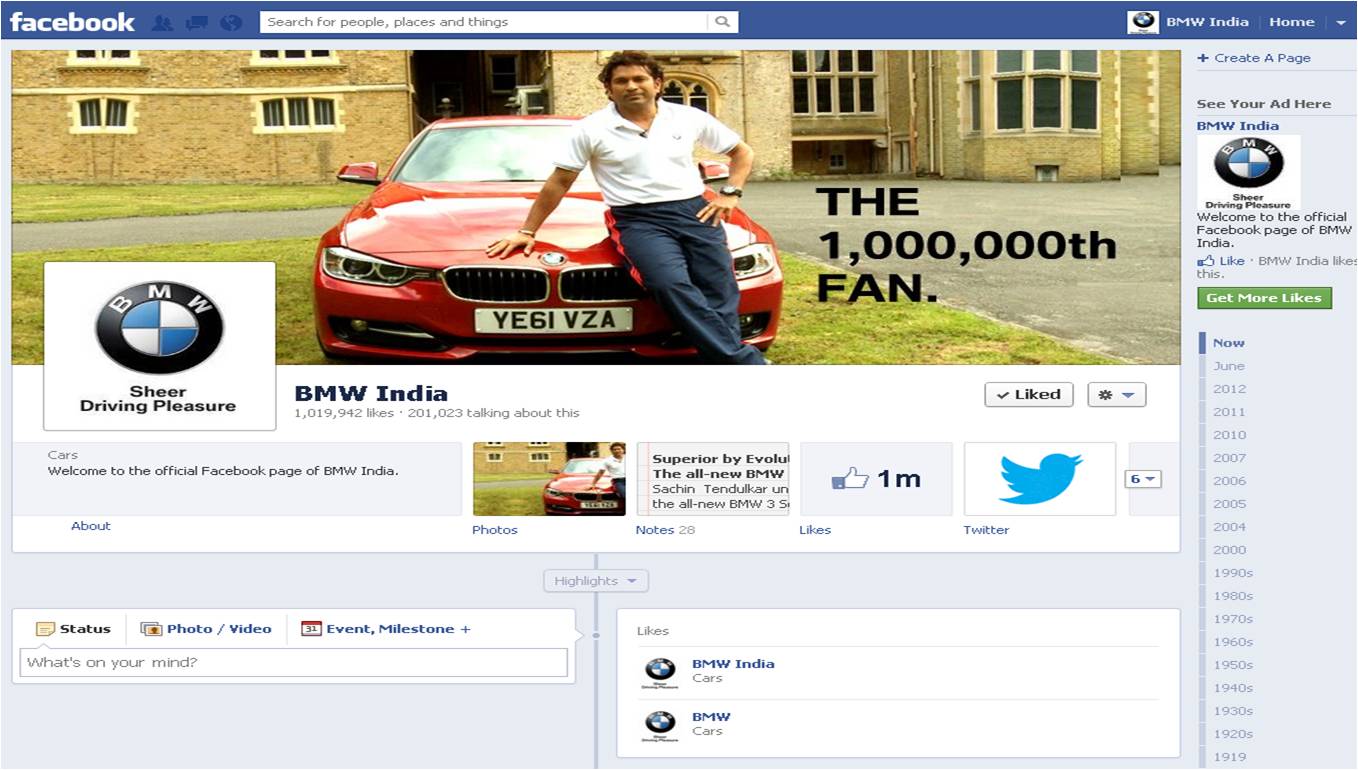 BMW India has become the first luxury car manufacturer to reach the milestone of ‘One million fans’ on Facebook atwww.facebook.com/bmwindia.

On 31 July 2012, BMW India welcomed legendary sportsman, the GOD of cricket Sachin Tendulkar as the ‘One Millionth fan’ to mark the special occasion.

Sachin Tendulkar said, “I have been driving BMW since 1993. I have owned various models- 3 Series, M5 and X5. Right from 1993, I started the trend of BMW and now my entire family including my brother and wife believes in BMW’s safety and comfort. It feels great to share the JOY of driving a BMW on social media and be the one millionth fan of BMW India community on Facebook.”

Dr. Andreas Schaaf, President, BMW Group India, said, “With the launch of BMW India page on Facebook, we have focused on harnessing the power of social media to create passionate brand engagement with the fans of BMW. Today, our Facebook page interacts with an ever growing fan base and spreads Joy in the virtual world. With Sachin Tendulkar as the One Millionth fan of BMW India on Facebook, we are proud to have achieved yet another milestone in our social media journey.”

BMW India launched its official page on Facebook in May 2011.

80% of the fans associated with the BMW India on Facebook belong to the age group of 18-34 highlights the affinity towards the BMW brand. In terms of engagement, the wall posts on BMW India page on Facebook organically reach out to more than 1.5 million unique people on a weekly basis. The exclusive content and the viral nature of the wall posts on BMW India page further extend the total reach of the page to 5 million unique people.

Since its launch, BMW India Facebook page has been one of the most highly active pages engaging nearly 30% of the fan base into active conversations on a daily basis. Presently, over 0.2 million people are talking about the page via commenting on the wall posts, contest participation, sharing, responding among others.