Home BMW BMW i8 Meets its Spiritual Precursor, the M1 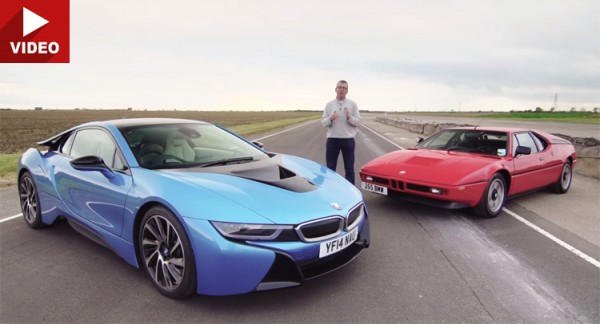 Look at it whichever way you will, but the BMW i8 is a landmark vehicle. For the world, it is a vision into the future where fossil fuels have all but been regulated strictly, and alternative fuels are not alternative anymore but the norm. For its Bavarian makers, it is their first mid-engined car since the BMW M1 from more than two decades ago.

So when the folks at AutoExpress got their hands on both the cars for a one-of-a-kind review, it created the perfect setting to pit these two exceptional cars against one another. And that’s exactly what AutoExpress did, taking both the cars to the track.

Despite its Italian supercar looks, the BMW M1 wasn’t exactly the success that BMW hoped it would be. Powered by a 3.5 litre straight six engine, it was pretty good to drive too, according to the lucky few who have driven one.

Even though it is a hybrid, the newer BMW i8 is no slouch either. Sure, it is no sportscar in the true sense of the word, but it doesn’t pretend to be one either. It is quite fast, pleasant around town, and more efficient than any sportscar can ever hope to be. Of course there’s the impractical scissor doors and the fake engine noise to contend with, but it is a small price to pay for making the environment last just a little bit longer. A lot of the car buying public think so too, which is why the i8 currently has a two-year waiting list, something that the M1 never could achieve.

Watch the video and see how far technology has come today.