Home News BMW i3 and i8 Spied In Sweden 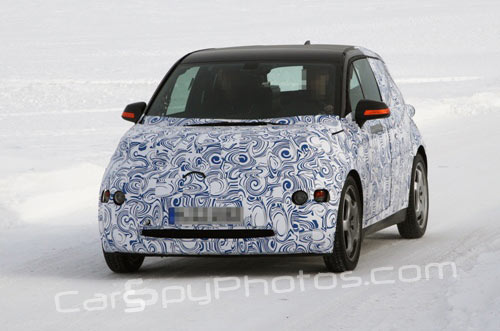 BMW with its new breed of future cars in making the i3 and i8 were spied in the cold winters in Sweden.

The i3 is an electric car which the company defines as an example of “purpose design”, which means it isn’t simply an adaptation of what already exists. It is a completely new and visionary vehicle concept.

The i3 ihas a lightweight body with carbon fiber reinforced plastics (CFRP) which make the i3 lighter and quicker. The electric motor is able to generate around 134hp of power, this power can be accessed right from the start. In fact electric motors are capable of revving at higher rpms without any stress when compared to the gasoline counterparts. Also another breakthrough is that the accelerator pedal will act as a braking pedal. When the foot is taken off the pedal it actively decelerates which is used to reclaim energy in the process of regenerative braking. The electric motor in this car doubles as a generator so when you are driving it also charges itself.  The entire propulsion system of the i3 excluding the external storage is the size of two beverage cases which means a lot in interior space making the car comfortable.

The i8 was built for a different purpose than the i3. The i8 is more on the sportier side and is indeed a hybrid electric vehicle fusing the better of two worlds. With zero emissions you can have your everyday drives without being guilty of hampering environment as well as enjoy the sports car performance with unmatchable efficiency.

Offering high technological assistance to the driver in totality it’s an all-rounder and not to forget a nature friendly sports car which makes it a true “Vision(ary) Concept”.