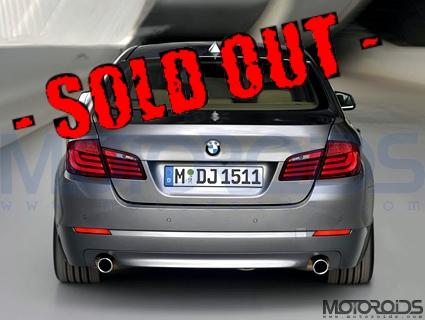 BMW has confirmed that its flagship sedan, the 5-series is ‘sold-out’ in all its markets! The company officials are hinting at a three to four month wait for the sedan since car has been phenomenally received in Europe and America. “The 5-Series is at the core of the BMW brand and we knew it was going to be a very strong vehicle for us. In the U.S., where it’s doing very well, it could come to between 15 percent and 17 percent of our business as we ramp up.” said Ian Robertson, BMW’s sales boss, in an interview at an industry conference in Bilbao, Spain.
Bloomberg reports that all the three premium automakers in Germany (viz. Audi, BMW and Mercedes-Benz) are recording significant sales growth this year. BMW has announced an 11 percent increase in sales in May while Mercedes claims that its overall sales are up by 17 percent with the help of the new E-Class (+84%) while Audi has seen a 15 percent increase in deliveries of its vehicles. The A6’s sales however are dwindling, since a replacement model is expected soon.