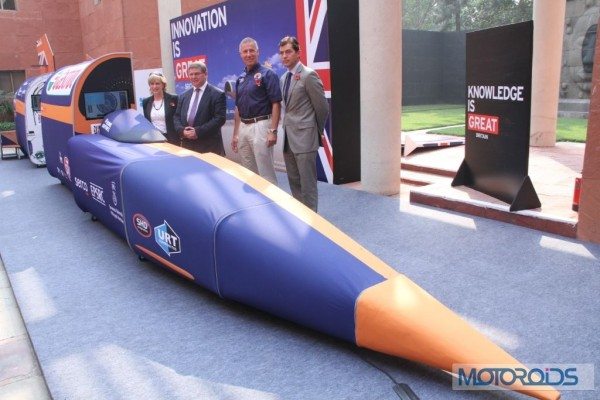 At full speed, BLOODHOUND SSC can cover a mile in 3.6 seconds. The supersonic car is a mix of car and aircraft technology, with the front half being a carbon fibre monocoque like a racing car and the back half being a metallic framework and panels like an aircraft.

The BLOODHOUND SSC project aims to inspire the young generation to pursue higher education in STEM courses and later careers in those fields. Around 5,600 UK schools and universities are involved in the BLOODHOUND SSC project. Collaboration between British Council, the ‘GREAT Britain’ campaign and BLOODHOUND SSC is a result of similar values and ideals of representing British innovation and science & technology on a global scale. 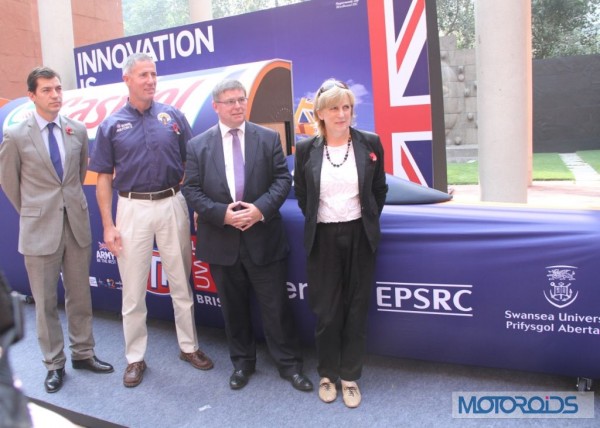 As part of the ‘GREAT BRITAIN’ campaign, British Council will be organising the Education UK Exhibition in New Delhi on 15 and 16 November at the British Council. The purpose of the exhibition will be to provide information on undergraduate, postgraduate or research programmes in the UK and also give information to aspiring students and parents on student life and culture. The exhibition in New Delhi will witness participation from 63 UK universities across England, Scotland, Wales and Northern Ireland.

Expressing his views on the event, Rob Lynes, Director, British Council India said, “We are delighted to bring the BLOODHOUND Super Sonic Car to India, which represents the alignment of UK education, innovation and technology at its very best. We welcome Indian students in the UK to gain internationally recognised qualifications from our top-ranking global institutions. For Indian students aspiring to take this opportunity, we are hosting the GREAT UK Education Exhibition in New Delhi this Saturday and Sunday. To support Indian students, we also have over 400 scholarships on offer for almost 60 courses across the UK.” 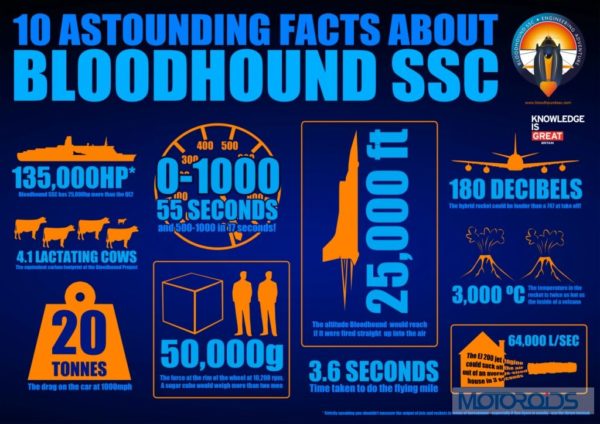 Adding his thoughts, Iain Gray, Chief Executive Officer, Innovate UK said, “The UK enjoys a global reputation for excellence in the field of education, skills, science and innovation. The UK has a strong tradition in offering world-renowned ‘STEM’ education. Universities in the UK are committed to delivering excellent research expertise. The flow of people between academia and industry helps to translate research into application. And with a supportive business environment, innovative companies can grow and prosper, delivering social and economic benefits. The UK is the perfect melting pot of cross-discipline capability which students can gain from. For those Indians who aspire for an international study experience and professional development in STEM, the UK promises them an unparalleled environment with excellent teaching and facilities and world-class centres of science and innovation across the country. BLOODHOUND is an excellent example of some of the exciting things going on in the UK, inspiring the next generation of scientists and engineers.”

BLOODHOUND SSC has a slender body where the outer body has been made using the Tata Steel and is approximately 14m in length with two front wheels within the body and two rear wheels mounted externally within wheel fairings. It weighs over 7 tonnes and the engines produce more than 135,000 horsepower – more than 6 times the power of all the Formula 1 cars on a starting grid put together!