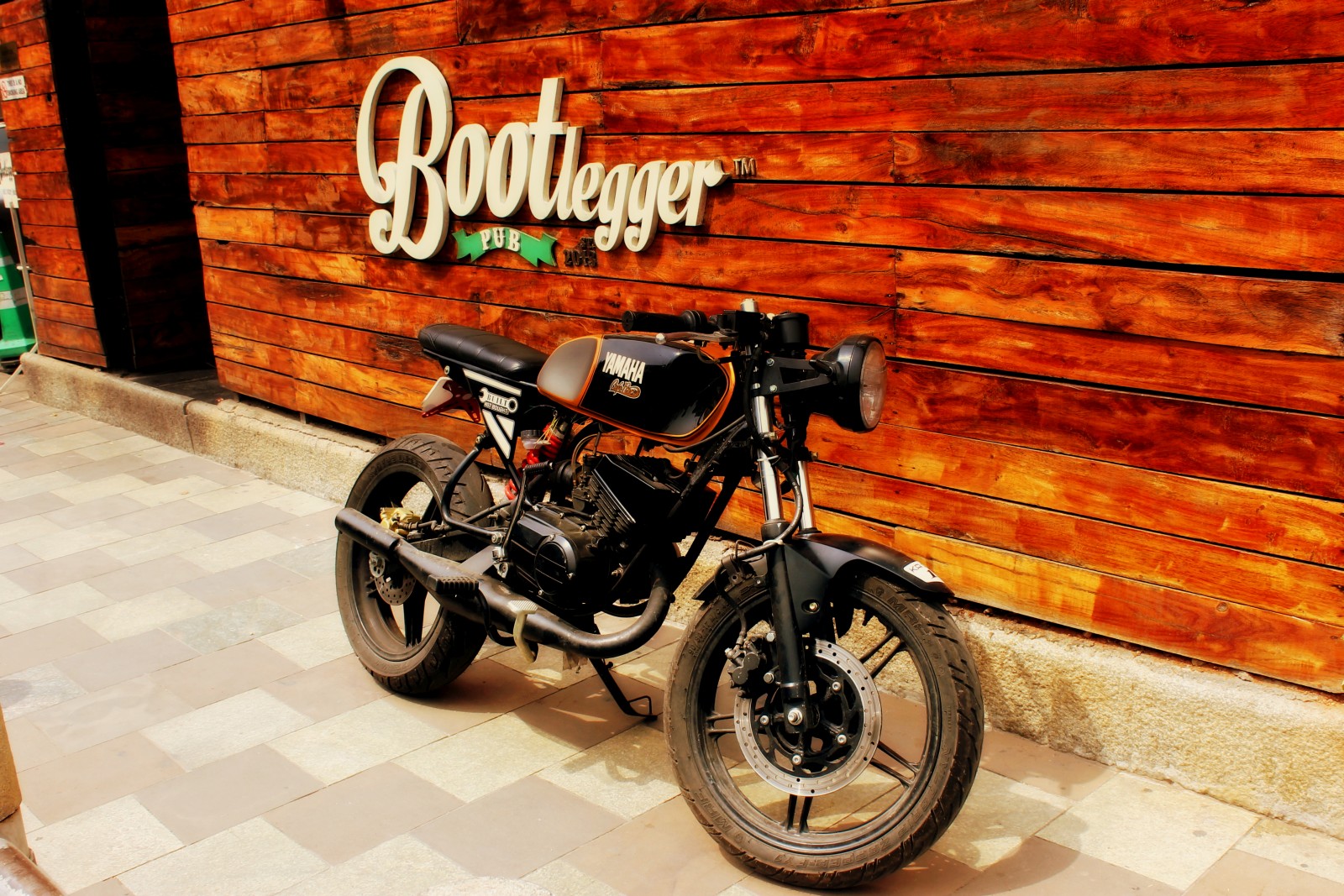 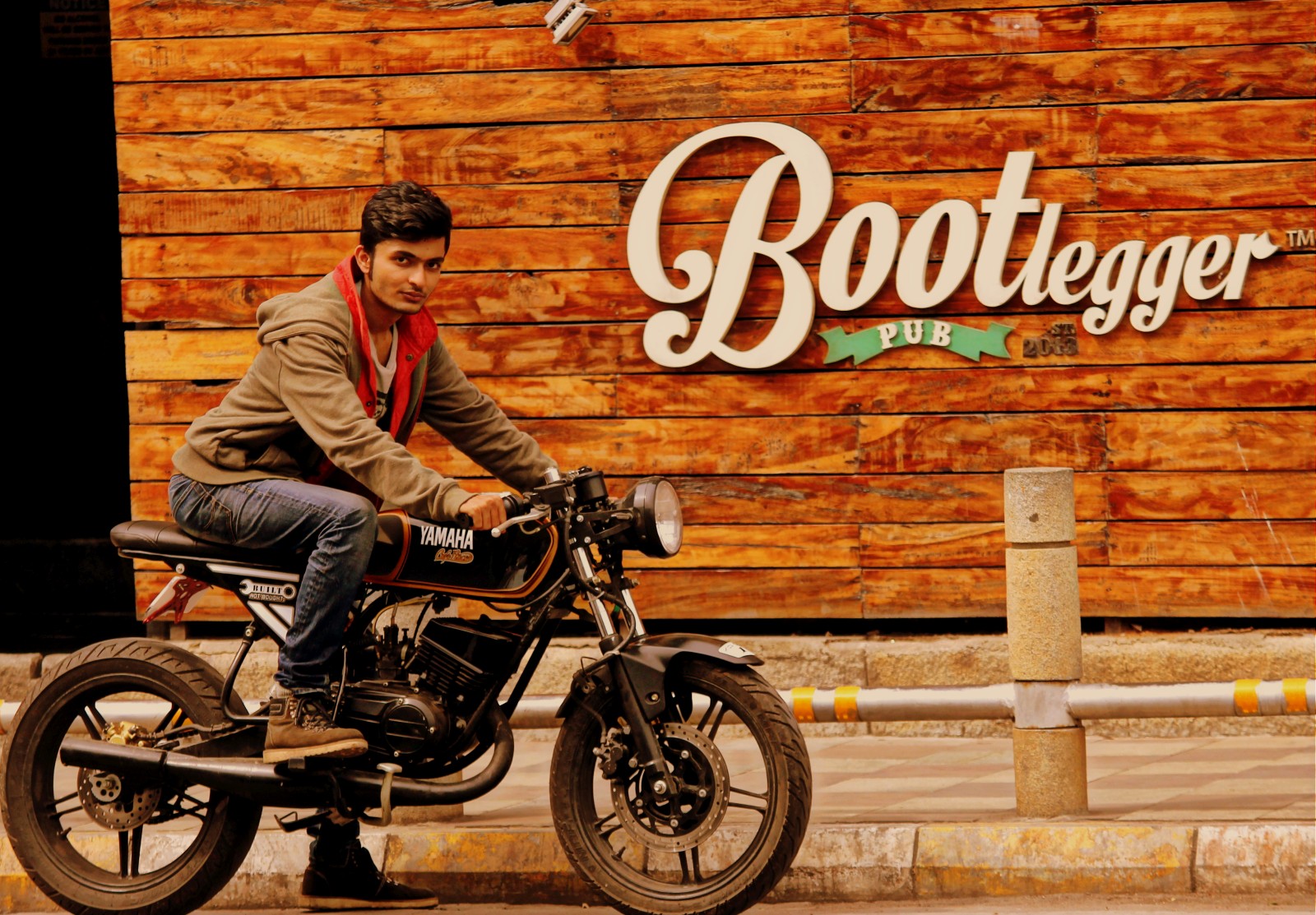 The yesteryear’s 2-stroke motorcycles have been revived on several occasions as we saw dozens of customised rides built around these machines. The latest to join the list is a 1998 Yamaha RX135 which gets a cafe racer makeover. This new motorcycle has been custom built by Bangalore based Mechanical Engineer Shashank Bharadwaj. The work on the motorcycle began in January, 2016 when the RX135 was probably in worse of its shapes.

The motorcycle got a massive overhaul, visually as well as mechanically. Visual upgrades include minimalist body work with a redesigned fuel tank, a single seat, clip-on handlebars and new swingarm. The hardware list on the motorcycle also includes a monoshock suspension at the rear, front and rear disc brakes and new alloy wheels. The motorcycle has been painted in black with contrasting Golden Orange stripes on the fuel tank. The overall design is pretty good but a custom bikini fairing would catapult its looks to a whole new level. 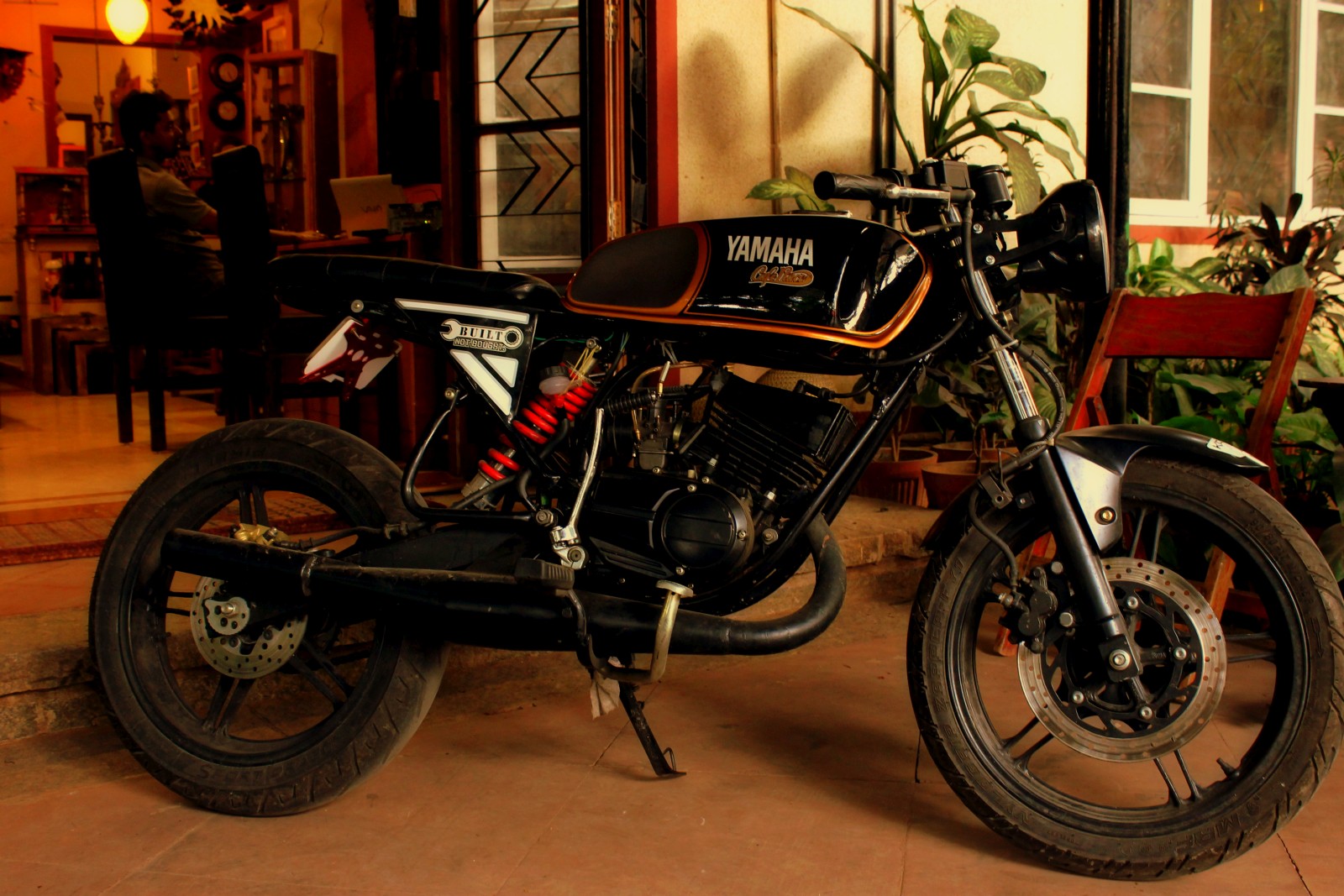 The entire build took nine months and over INR 1 lakh in expenses and the finished product is a commendable piece of equipment. Various parts required for this old Yamaha were donated by the new YZF-R15 V2.0.

Read more about the build in the words of the man himself as he shares his experience with team Motoroids.

I always had an attraction towards Cafe Racer motorcycle. You may have your supersports and naked roadsters but a cafe racer exudes a different vibe altogether. And I thought a custom motorcycle will also be befitting for a mechanical engineer. And so, in January 2016 I sourced a two stroke motorcycle (1998 Yamaha RX 135 4 speed) that was nothing more than pieces of rusted metal and a broken engine held together by nuts and bolts.

And so I began to work on my bike at a reputed local workshop. I was energetic and enthusiastic to get the job done but there was one problem. Since I couldn’t spend all my time on the bike and had to balance between this project, my Engineering final year, my job and various other troubles, the progress of the bike slowed down to a point where it almost came to a standstill. Finding a reliable garage, engineering equipment and lathe, and welding apparatus all under one roof was another task. Getting this job done seemed to get harder by the minute. 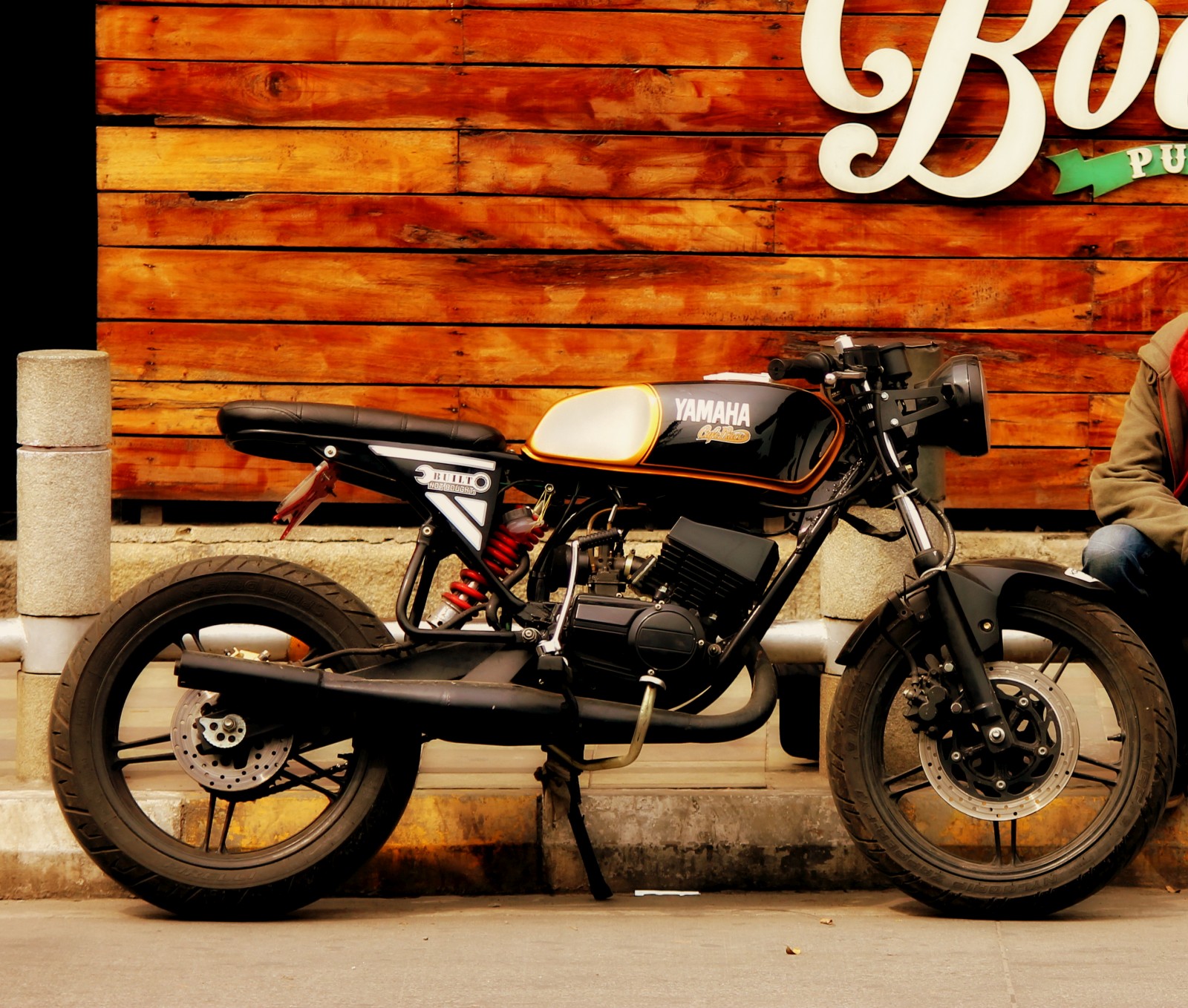 But I wanted to own and ride a cafe racer desperately, and this build became an obsession.

The customisation job slowly got back on track and after several visits to the welding guy and dozens of permutations and combinations of wheel spacers-bearings-axles-brake calipers, I found the right combination. Getting the wheel, swingarm and brake setup right was an absolute nightmare. Meanwhile, the chassis got reinforced with steel rods and modified for a monoshock setup.

The engine was re-bored and with imported pistons, and ported. The carburettor on the motorcycle is 28 mm D-slide which runs on a Uni filter and gets a custom made chamber. The wheels, borrowed from the R15 V2, are wrapped in 140 section Pirelli Sport Dragon at the rear, and 90 section MRF upfront. The swingarm, brakes, and other components are mostly from the R15. Low clip-ons and a speedometer were mounted on a front suspension which is again borrowed from R15. All this was painted in Golden Orange and Black, and with some custom stickering. The bike finally looked like it does today. The entire build did cost me north of INR 1 lakh and took nine months to complete. 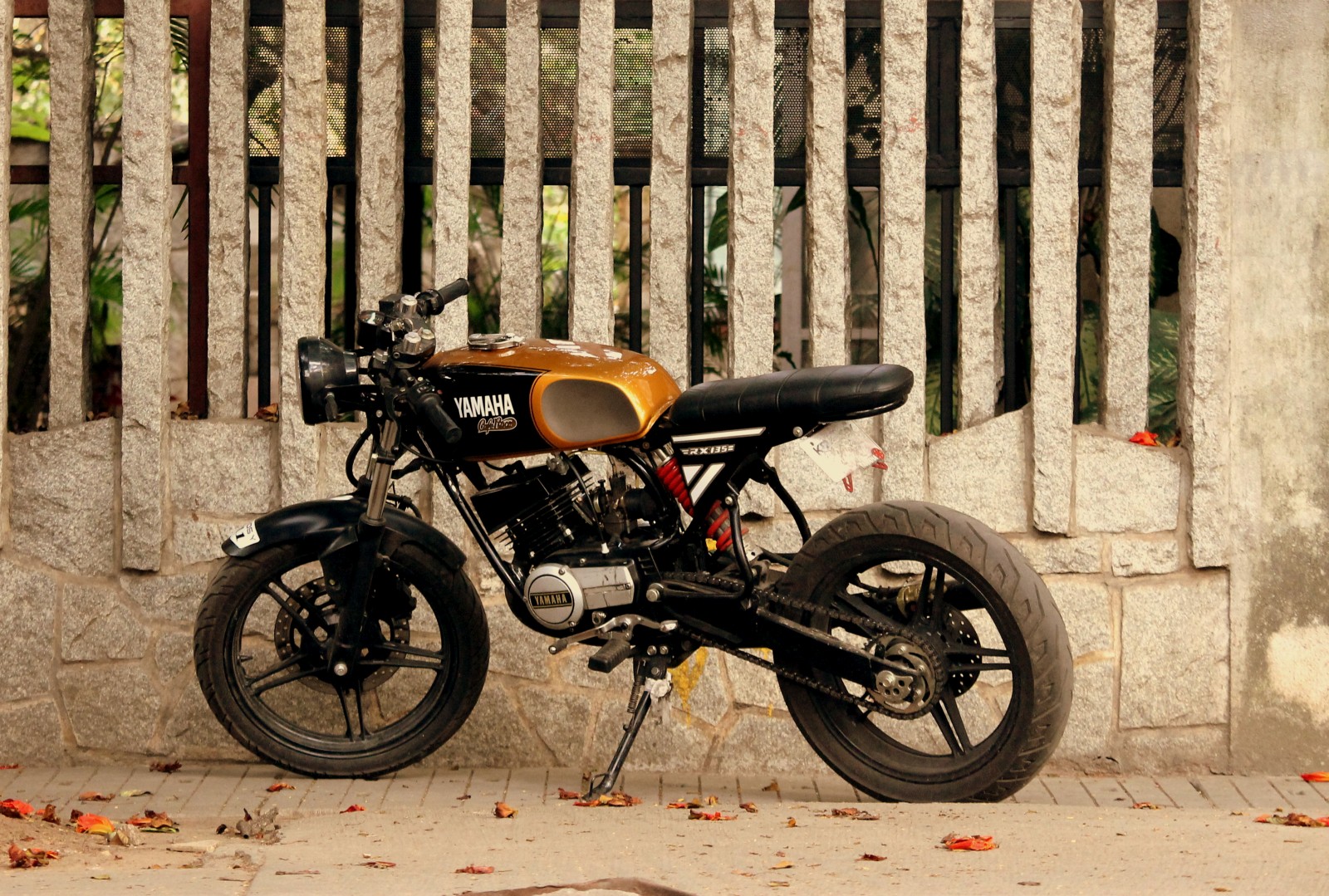 The bike rides wonderfully and handles really well. The engine feels torque rich too. However I do feel the need for another higher gear. Also, there are vibrations in the handlebars at high revs. But considering that this bike is combination of parts from numerous different bikes, I never expected a butter smooth ride. Also the front suspension and monoshock feel quite hard, making uneven surfaces, potholes and bumps a nightmare. I will get these issues sorted slowly over the weeks.

Isn’t that one beautiful story of a man and his machine? Let us know your views about this custom built RX135 Cafe Racer through the comments section below. Do check out more images in the gallery below.