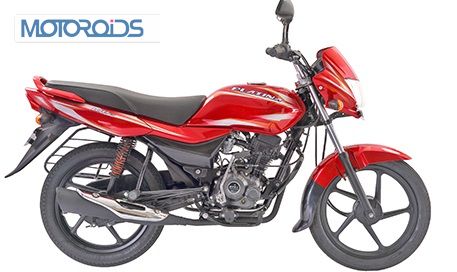 96.9 kmpl! – That’s the claimed mileage touted by ARAI for this Bajaj.

The Bajaj Platina is the most affordable bike that the company offers in India and competes with the likes of the Hero Splendor and Hero Passion, amongst a few others. The bike has done reasonably well for Bajaj and is quite popular within the commuter class of bikes in the country. But with the competition hotting up, Bajaj decided to up the ante and make the rivals tremble in their boots by pulling out the ace among the cards of technical performance, aka fuel efficiency. The company claims an ARAI (The Automotive Research Association of India) claimed mileage for the 2015 Bajaj Platina ES of 96.9 kmpl, which is quite an amazing figure. No wonder Bajaj calls this bike as a ‘World’s Mileage Champion’.

The new Platina ES will also feature electric-start, apart from the usual kick-start. The powerplant on offer here is an all-new 102cc single-cylinder which incorporates Bajaj’s DTSi and ExhausTEC technology. This same motor is seen powering the Discover 100M, but on that bike, this motor generates 9 bhp and approximately 9.02 Nm of torque. On the Platina ES, though, the 102cc motor is pegged down a bit so it now develops 8 bhp and 8.7 Nm of torque.

In the matter of appearance, the Platina ES doesn’t look too different from the regular Platina, but Bajaj has given it a few extras such as a slightly reworked headlamps, new and brighter graphics, new body side panels and of course, a new exhaust pipe. In terms of price, the Platina ES will be available at Rs. 44,507 (ex-showroom, Delhi).