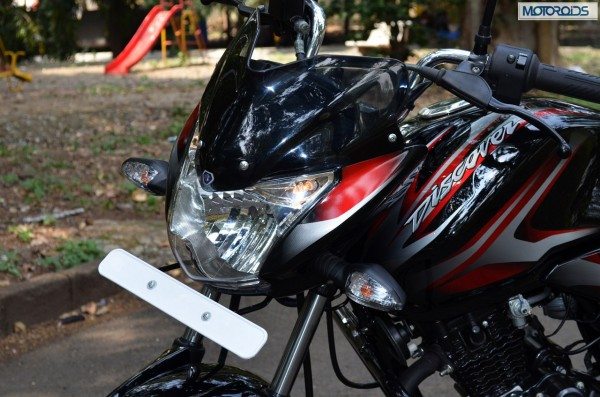 Regulars here would know that we reported in detail when Bajaj Auto Limited (BAL) launched the new Discover 100M, an entry level model of their popular motorcycle range, in India ysterday.

Back at the launch event, Mr. K Srinivas, President (motorcycle business), stated that the new bike would cater to the fast emerging middle segment of the proverbial ‘mileage bikes’. Srinivas further said that while BAL is doing really well in the ‘sports segment’, which is home to the very popular Pulsar brand of bikes, the manufacturer still has a long way to go in the mileage segment. The latter can change with the advent of the new Discover 100M. “We hope the new variant of Discover will significantly push the market share of the company,” Srinivas said.

The new Bajaj Discover 100M yesterday stepped into the fast emerging Indian bike market with a starting price of INR 45,996 (ex-showroom Delhi). The top variant, which comes equipped with a petal disc, can be bought for INR 4,.000 (ex-Delhi). The new 100M has been positioned below the Discover 100T and finds itself in the INR 44000-INR 49000 bracket, where it locks horns with the Passion Plus, Dream Neo and the likes.

Powering the bike is the same 102cc motor that powers the 100T. However, for the Discover 100M, the bike has a lowered max power of 9.3 PS and an ARAI claimed fuel efficiency of 84kmpl. The bike has a claimed top speed of 95 kmph and comes with several segment firsts such as Aluminium side steps. Spider web alloy wheels, standard Electric start, Gas charged rear shock absorbers, Low maintenance battery, Petal disc brakes and a 4 valve engine.