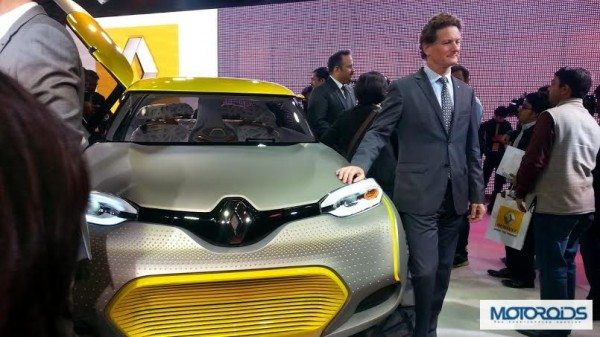 We are reporting LIVE from Auto Expo 2014 and seen here are fresh images of the new Renault KWID concept buggy.

The new Renault KWID concept has been designed by the boffins at Renault Design India and the new model follows the ‘Explore’ wing of the car maker’s lifecycle-based design direction.

The new Renault KWID concept boasts of a robust appearance due to its protective guards and chunky wings, all of which helpo to impart a sense of strength. While the new concept looks like a buggy car, it has a two wheel drive layout.

On the inside, the car has been designed to serve as a sung cocoon and has been inspirerd by a bird’s nest. The vehicle’s seats, suspended over a solid base in white, give an impression of lightness, while their two tone elastomer material provides a sense of brightness. The KWID also sports rear air con with controls positioned on the driver’s seat back. The seats also are ventilated through concentric perforations to aid ventilation. The dashboard is an integrated tablet for commandingthe navigation of the Flying Companion.