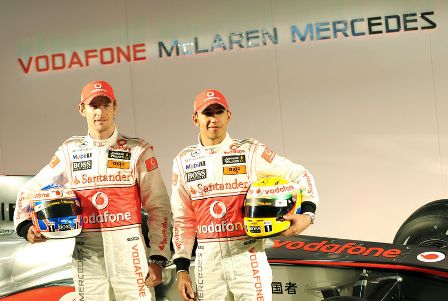 There has been a lot of talk about this weekend being the First Anniversary of “lie-gate”. Ok, so a Formula 1 driver lied on camera this time last year. Ok, so a senior McLaren executive did the same thing. Get over it. Every day is lie day in Formula 1. Lewis Hamilton has been giving teen-special speeches over the last few days, about the things he “learned” and how lie-gate helped him “grow”.

In my opinion, the only thing it has done is made him weaker than his opposition. If Michael Schumacher had apologized for all the wrongs he’s done in Formula 1, he would have become Rubens Barrichello. The same goes for Senna, Piquet Sr. and Alonso. The only exceptions to this are Piquet Jr. and Montoya. McLaren would have spent a lot of time thinking about what information they can and cannot share with their baby. And less of information is certainly not helpful in Formula 1.

There is very little to add, after Bahrain. McLaren are probably third fastest amongst the front-runners. The pre-season predictions about Button’s smooth driving style suiting the new fuel regulations have been thrown out. The big fuel tanks have made all the drivers super smooth and super boring.

The new points system will kick in only towards the end of the season, where the relatively massive gains for victory (25 points for the winner over 18 for second place) will matter more. Albert Park might spring a surprise if it rains. But then again, a dark and overcast sky combined with the early evening race start might make all the drivers even more cautious and…..you guessed it……more boring.