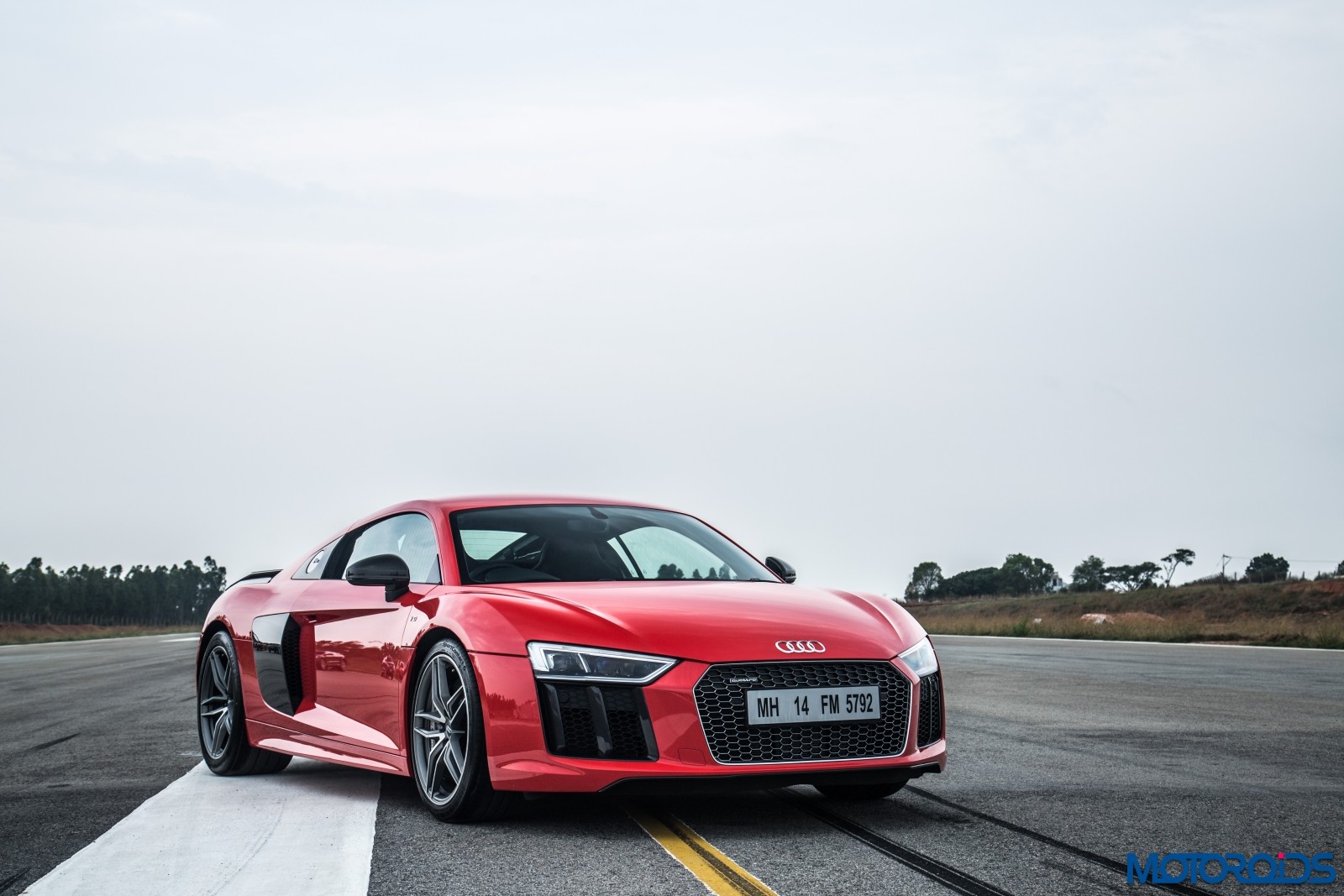 Unrestrained desires are what have brought the human civilization from living in caves to living in houses which can be controlled from across the world. We have come far from the stone wheel, all the way to self-driving cars. And talking specifically of desires, Supercars have to be among the most desirable objects ever. They are some of the beautiful exponents of realization of humans’ unrestrained dreams. 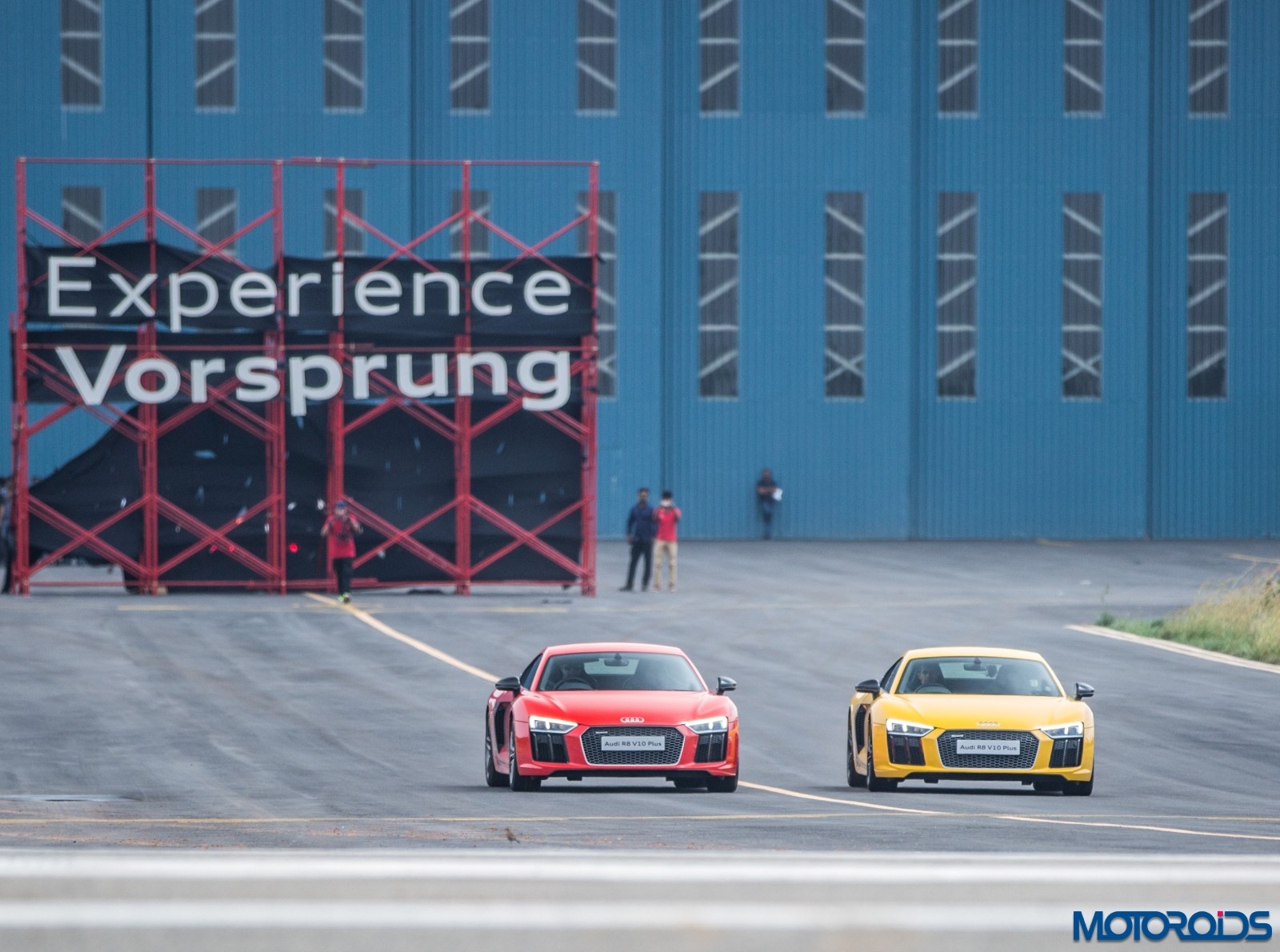 These things are not created by engineers with drafters but by dreamers with finger paint and passion. They are neither supposed to make environmentalists happy nor your neighbor smile at you with assurance. They are mean. They scream at your neighbor’s face that you have arrived. These machines may run your bank balance dry but would invariably create memories which will make you smile on your death bed. 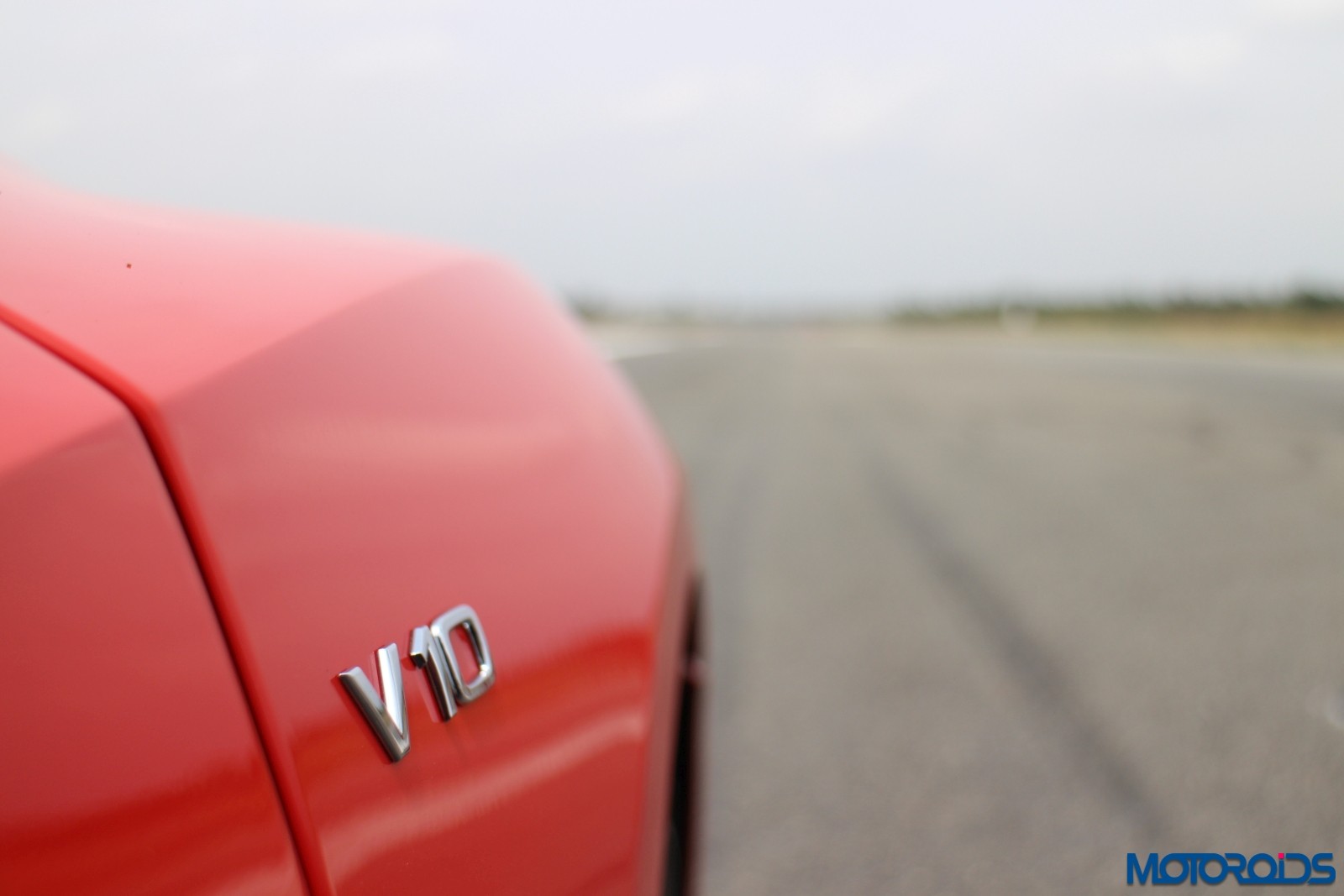 Cutting edge, and pushing the limits, these machines have always shown the way forward in automobile evolution. These are the first creatures of the new species, created by an undying desire of humans to go faster. And that brings us back to the topic of unrestrained desires and the Audi R8, the car in question here. 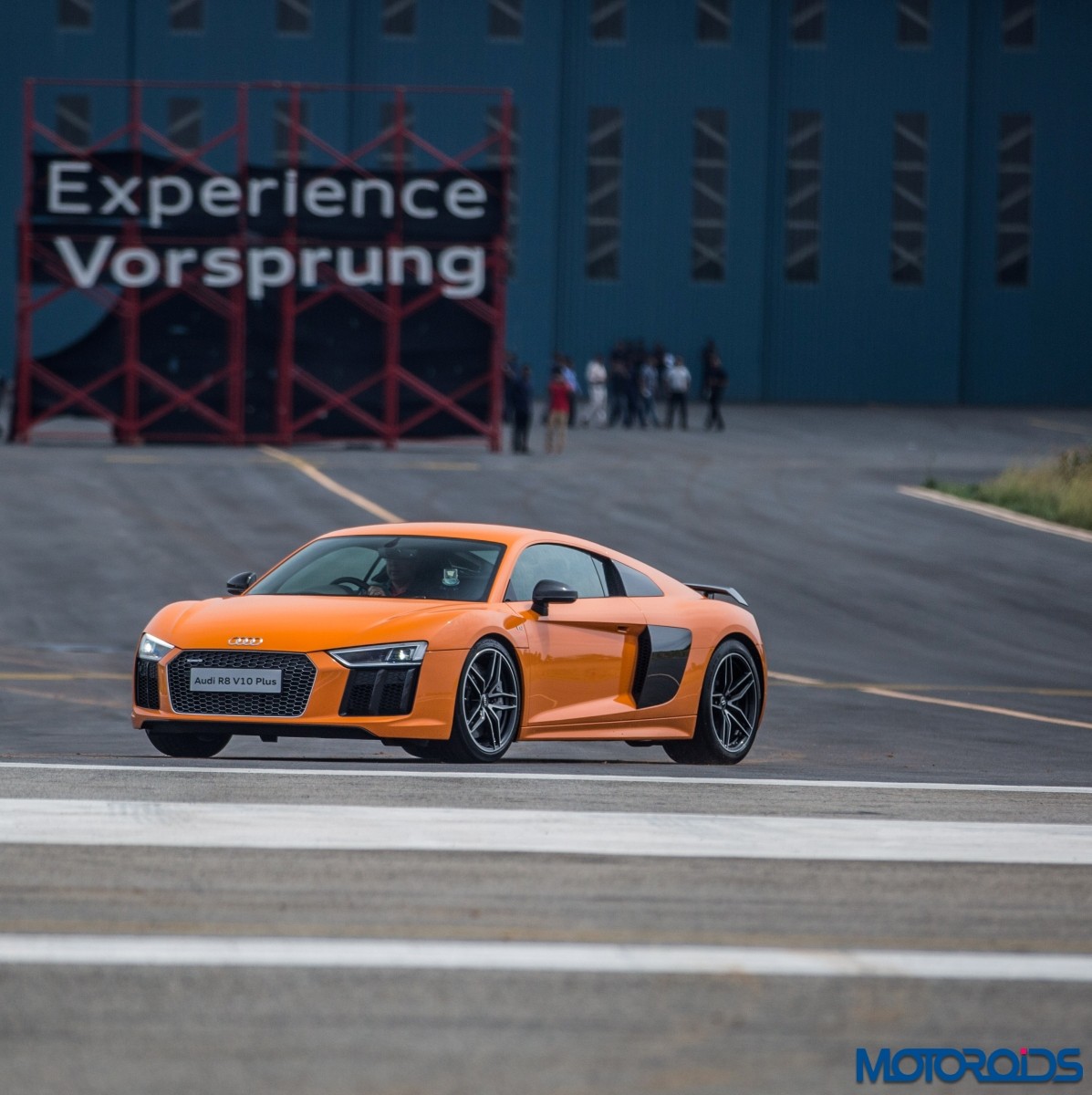 Audi, a German car maker known for its refined, restrained lines and consummately balanced approach to car designed probably had some desires too – the desire to create something properly wild and wicked, something that would deserve the tag of a supercar without argument. That desire was strong enough for even Audi, and the brute force that broke all the conservative shackles and incarnated itself to give that desire a shape was the Audi R8. 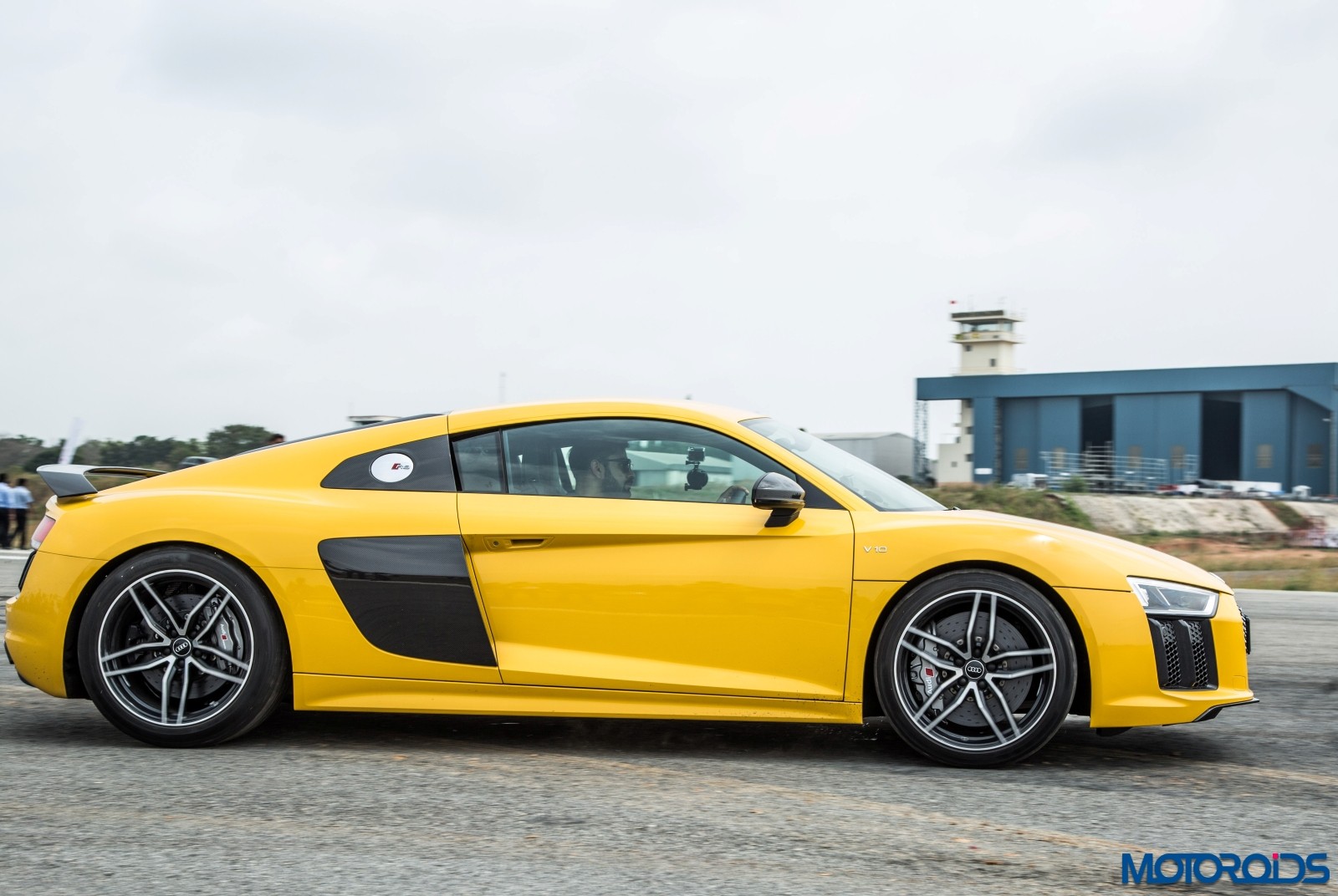 The new car had excellent built quality, was practical, had some storage and handled like a dream. They sold in great numbers as well. Soon it was launched with a v10 from a Lamborghini Gallardo, got a face lift in 2012 and we also saw a spyder version. Come year 2015, we had the new generation R8. Now remember Volkswagen also owns brands like Lamborghini – the flag bearer of the unrestrained. So what they did here was combine the best of German engineering and Italian stallion power. They put a naturally aspirated 5.2L v10 engine from the Huracan into the R8. So we have a colossally powered Supercar belting out 610 hp @8,250 RPM and a double clutch gear box delivering power to all 4 wheels. All this propels the car from 0-100 kmph in about 3.2 secs and no wonder that the new, second-gen R8 is the quickest car Audi has ever made. 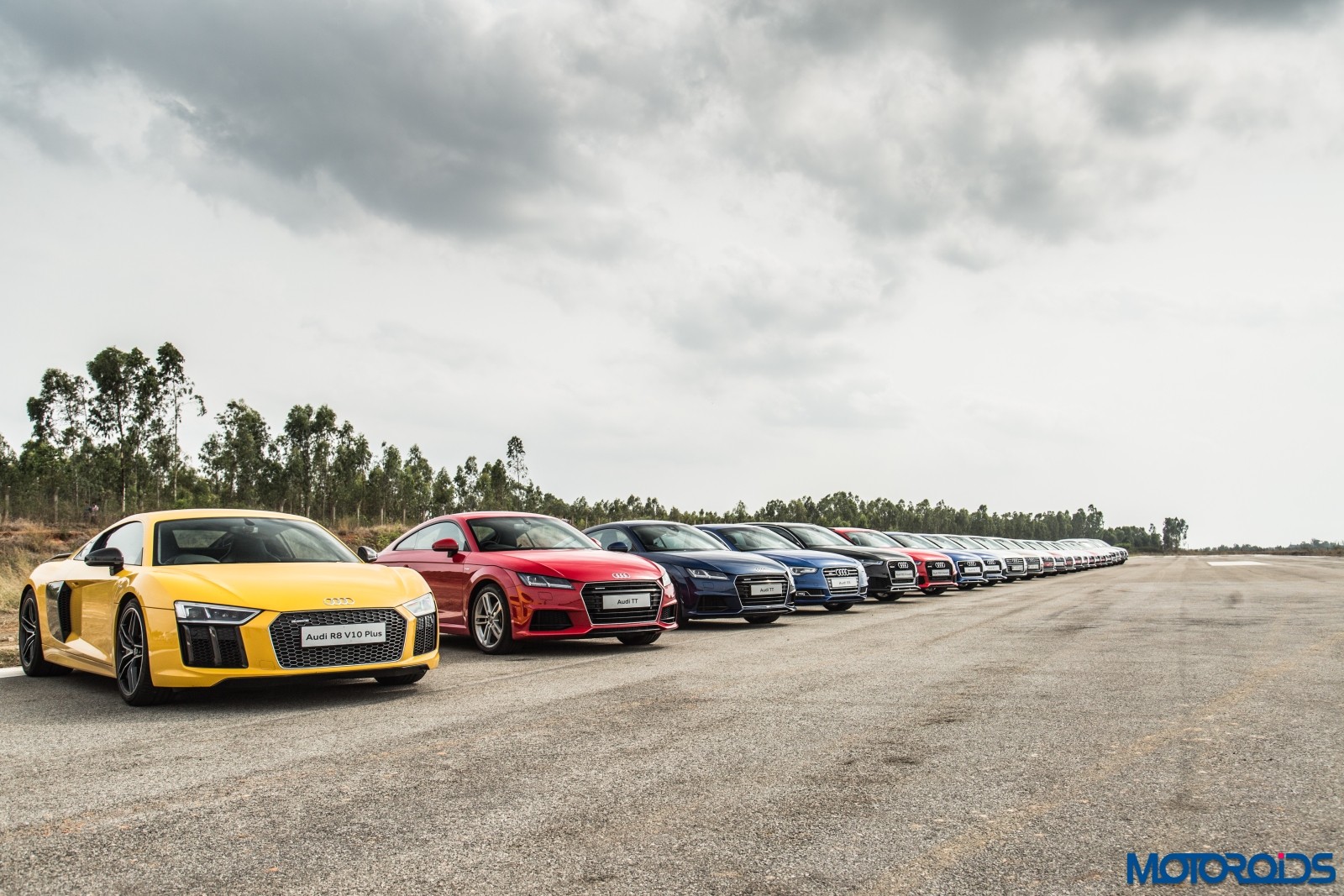 I was flown from a busy airstrip in Delhi to another in Bangalore, so that a bunch of us could experience what flying low feels like. As our bus pulled in on the air strip, I witnessed all kinds of Audi’s lined up and then, something in Yellow. It brought a smile on my face which could’ve been visible from the moon. The plan looked like this. Each car had two drivers, one would take the car to other edge of the strip and then switch with another soul. As I lined up on the start line behind the bright red R8, my heart was pounding. Soon I heard on the radio set: GO! And my pearlies clenched. 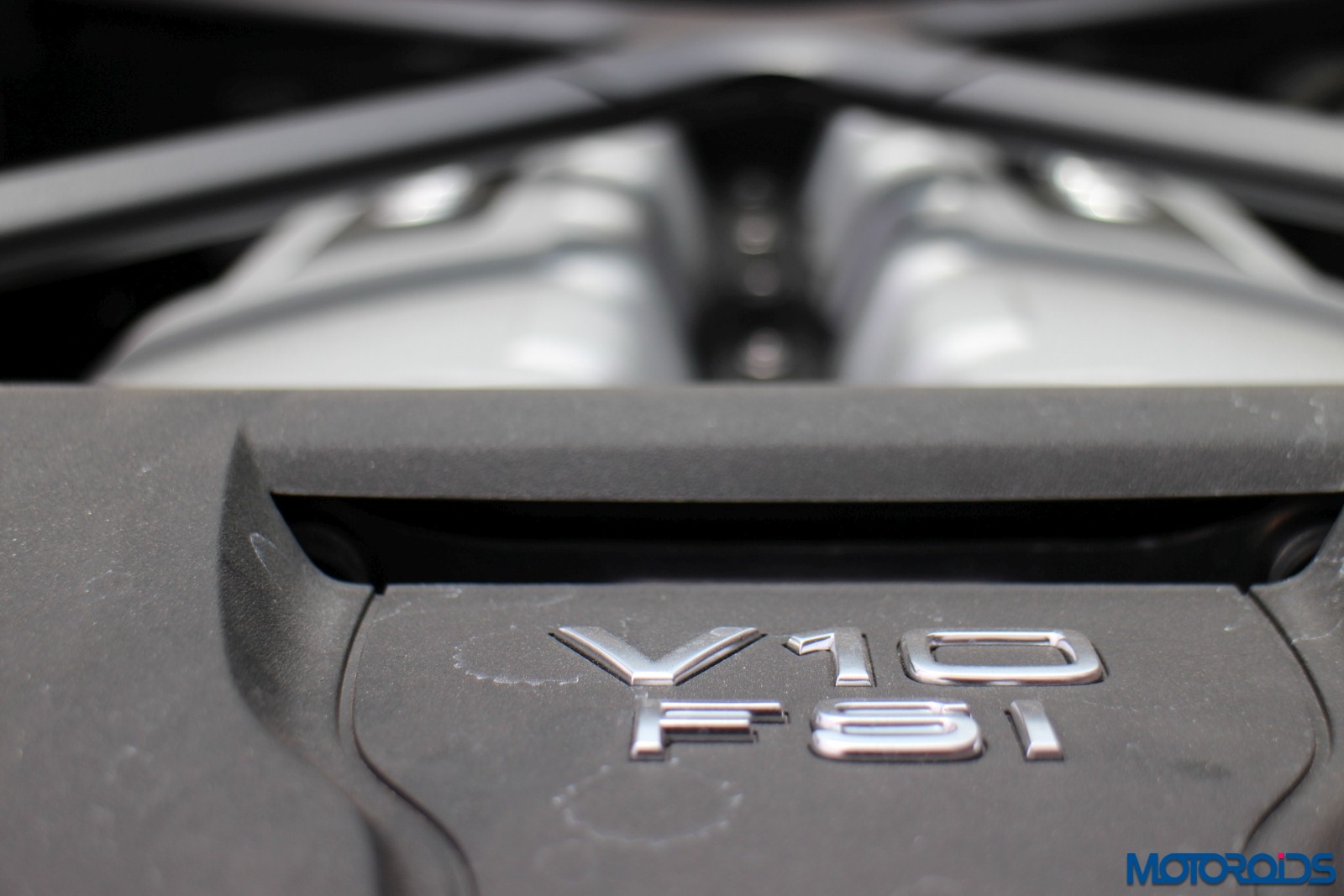 Launch Control switched on, my right foot ensured that every last millimeter of the accelerator pedal’s travel was used. A flag waved, the left foot freed itself from the brake and I was tapping into some rare for these times, naturally aspirated V10 violence. It howled sitting right behind my ears, had me pinned to the seat, as my sweaty palms held the wheel straight. The Quattro system ensured all four contact patches were clamped to the surface and locked with a bolt, as the high revving V10 shoved yellow metal towards the horizon. And it’s just not the acceleration. It’s also how it accelerates. In this world filled with Turbo chargers, Naturally Aspirated engines seem to be losing the battle. But the R8 is one of the few torch bearers, holding the flame high for purist petrol heads. The throttle response is immediate, as the needle rushes towards the 8700 rpm limit and only drops a couple thousand clicks lower with each shift to start all over again. 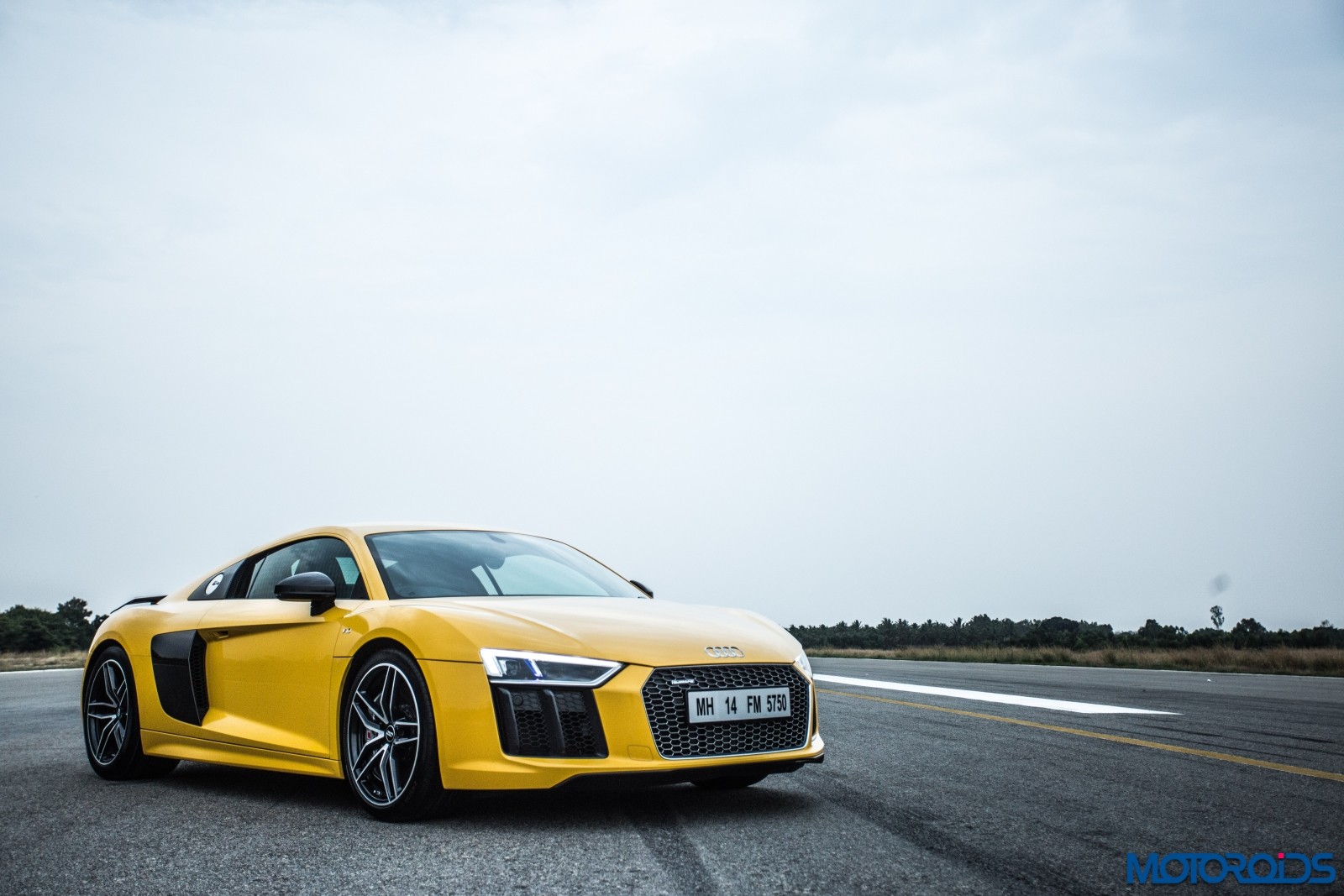 As Audi’s flag bearer howled towards the horizon, we were flying low at 220 kph and still accelerating. This was the last I saw the speedo with a quick glance. A little red dot on the other side was shedding its blurry pixels fast, and in no time, a high definition visual of a marshal waving the red flag frantically showed up. I slammed on the brakes, as the carbon ceramic system grabbed on like a geco to the wall. There was a slight wobble but things were in complete control after a minute correction on the wheel. 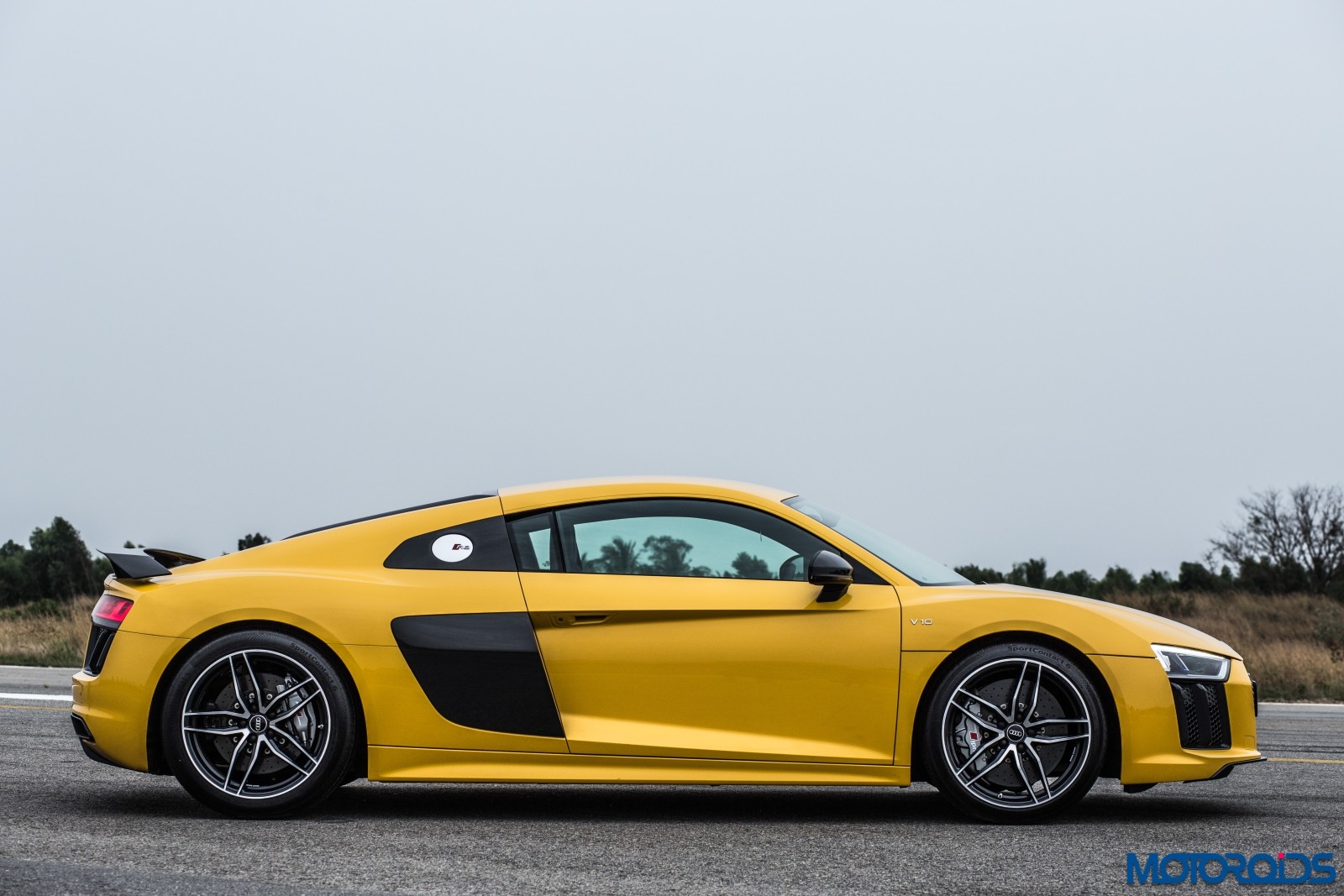 We had sped through an Airport Tarmac in a matter of seconds, but lived a decade full of dreams in that time. I turned right around the bollards and took a U turn to my left. My heart still throbbing faster than the R8’s V10, but it was fast dropping its pace too, as I had to line up the car for the next guy. Coming to a halt, my palms refused to let go off the wheel as I wanted another go. But a tall figure, eyes cocooned in a Balaclava and a Helmet, opened the door from the outside, stared at me, and although I tried to mimic the sweetest look I’d practiced in a mirror, a voice growled, “Get down right now”. So I did and there I stood, still wearing the helmet and staring back at the car as it was being driven away. My knees felt weak, my heart probably sinking, but a voice inside consoled. Maybe it’ll come back another day.

Check out an image gallery of the new Audi R8 V10 Plus, along other gems from the Audi stable below