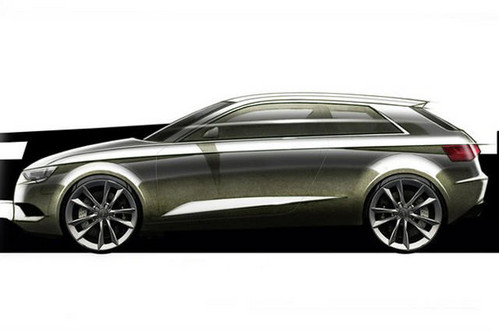 Audi has fallen in love with sketches. Earlier we reported about the Q3 sketches that Audi has released. Now the company has also released sketches of the upcoming R8 GT Spyder, the Audi A3 Sedan and the A3 Hatchback. These sketches gives a rough idea about the shape the car is going to take, giving us a hazy yet clear picture of the final product.

Audi has already showcased the A3 sedan as a concept at the Geneva Auto Show but it’s the the hatch that has got us by surprise as Audi never disclosed any news about it. Looking at both sketches of the A3 the one which excites more is the hatchback.

Audi has announced their new GT Version of the R8 Spyder which is set for debut at the 2011 Frankfurt Motor Show.  The new car is on made on the same lines on its R8 GT sibling. The new additions in the Spyder R8 GT are that it is slated to be lighter, more powerful and more track focused when compared to a non Spyder version. The engine too remains the same as the R8 V10 – the 5.2 lit V10 giving you a mind blowing 552bhp of exhilarating power with a weighty 540Nm of torque.

In this whole process of remodelling the R8 GT to R8 GT Spyder, the Spyder had to burn the extra 95 kg weight which makes it faster than the R8 GT. The gear shifting is taken care by the 6-speed R-tronic gearbox and Audi’s specialty  Quattro system is there as well.  Looking at the sketches one can witness the striking resemblance with in the splitter, rear wing with the R8 GT Coupe, but the sleeker packaging makes it looks simply superb.

Do let us know what you think about these upcoming Audi Exotics!