These pictures are of the Audi LSR Superbike Concept. This concept streamliner has been designed by Marc Senger. It is expected to be in action at the 2031 Bonneville Speed Week Trials. The manufacturer seems to aiming to destroy the existing Land Speed Record for streamliners and establish a new one. Audi has not revealed any further information with respect to the engine details. It may be powered by either a single or two engines. The chances of this motorcycle being powered by a diesel TDi mill are quite significant too. 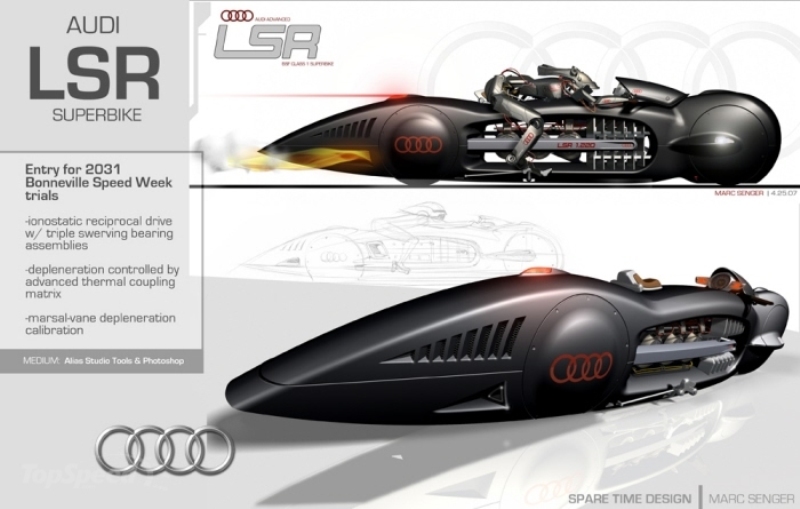 Currently, the JCB Dieselmax streamliner holds the land speed record of 350mph. ITs is powered by two 5.0 liter 4 cylinder mills that were originally developed to do duty on the manufacturer’s construction vehicles. No other diesel powered streamliner have been able to reach a speed which came threateningly close to the existing record so far.  While, the land speed record of 232.522mph set aboard a single engined streamlined motorcycle (turbo charged Suzuki Hayabusa) is held by Leslie Porterfield. Going by the pictures, Audi’s superbike concept sure looks fast and seems quite capable of attaining glory in the top speed stakes. Guess, we have to till the Speed Week Trials are held at Bonneville in 2031 to hear now Audi’s superbike concept fares.