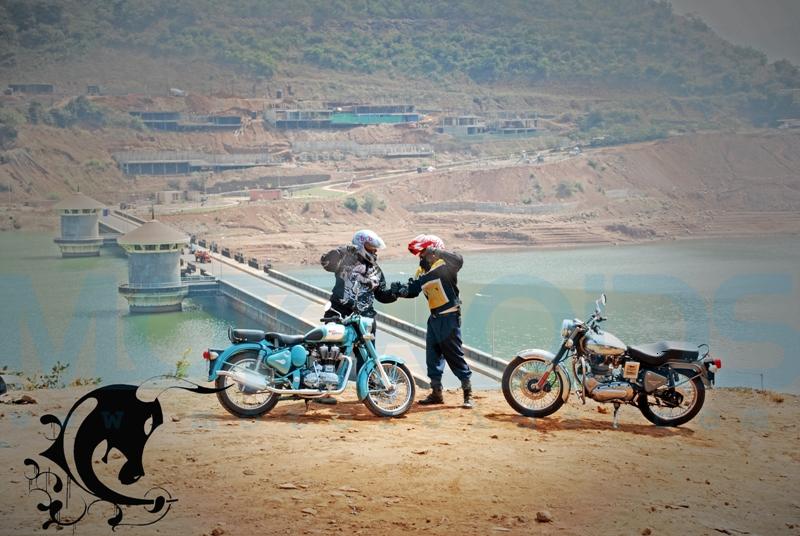 Last month Rash made his intentions clear about pitting the LB500 against Royal Enfield’s latest creation – the Classic C5. And upon reading that conclusion in Rash’s first ride report of the C5, my dear friend Baljeet Singh Kochar of the ‘Roadshakers’ clan immediately called me up to know when and where our team could meet him for a showdown! The battlefield was right in our backyard – the legendary ghats of Mutha near Pune. The battle however was different. Instead of defending the individual steeds that we were riding, Baljeet was ready to fist fight just to prove that the C5 lent to us by RE was a better machine than his own LB500 that had stolen our heart a few months back – and we of course, were arrogantly denying his claim! 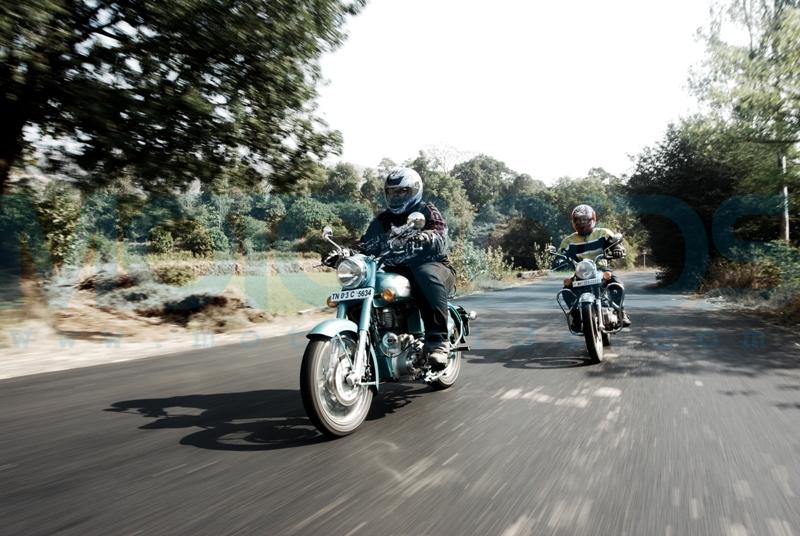 As the day of war dawned, we thumped to the holy battleground of Mutha to find out who had thicker metal of the two. To begin my evaluation I had the two contenders stand face to face. When the two metallic hunks stand firm together, they have this masculine aura that surrounds them. But both these bikes have their own reasons of marking their presence.  The LB500 with its shining chrome and 19” wheels, stands tall with pride. The Classic on the other hand, dyed from head to toe in the green (or blue?) colour, with its long sweeping fenders and 18” rims stands like an innocent looking wild cat ready to pounce on its prey. But the analogies apart, I personally feel that the LB500 sports the old school macho look that you expect from a Bullet, while the Classic C5 looks ‘classic’ no doubt, but comes across as a rustic old bike restored by a new age mechanic with 21st centaury tech and paint.

Nevertheless I still love the round taillight on the Classic and the option to make the C5 a single seater in a jiffy – which unfortunately the LB500 doesn’t allow. Moreover my entire team thinks that the Classic is a much better looker than the conventionally styled LB500 and that I should dump my head in a gutter if I thought otherwise. That pretty much settled the design debate in the C5’s favor, forcing me to come to the engine.

This was one department I knew my beloved LB500 would excel in.  We decided to settle the score with a plain drag race on a quarter-mile straight. As the two Bullets shot of the start like we were expecting the small hillocks around us to rupture for a cinematic climax and probably a photo finish– but it was not to be. What we had instead was the LB500 winning hands down as it finished at least two bike lengths ahead of the equally large hearted C5.  But Baljeet wasn’t convinced at that. He wanted us to strap-on our VBOX timing equipment to find out the actual 0-100 km/h sprint timings. 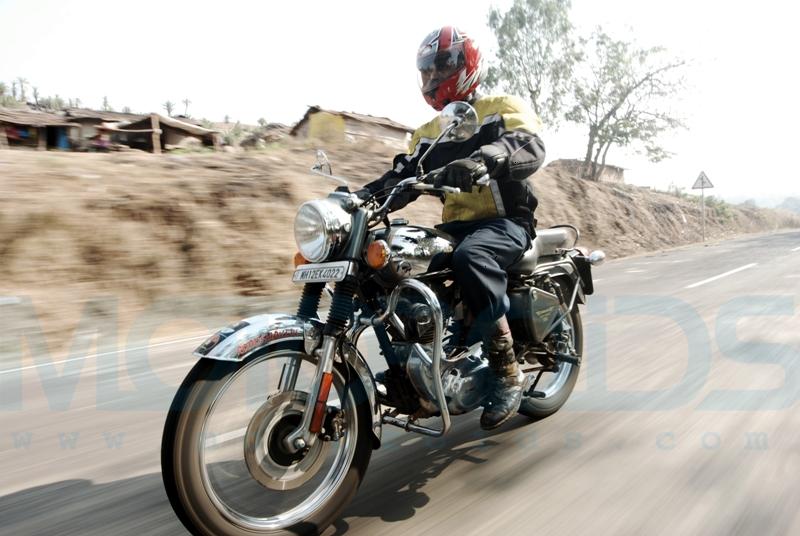 The LB500 shot off for the sprint shouting like a mighty gladiator. The C5 on the other hand continued to leave us scratching our heads, as it coughed the entire 500 cubic centimeters out of its cylinder while it made a run for the 100 km/h mark. As the laptop pulled out the data from the VBOX, the LB500 was 0.4 seconds faster in its acceleration to the ton, than the C5. The big Punjabi was out of words on this one. 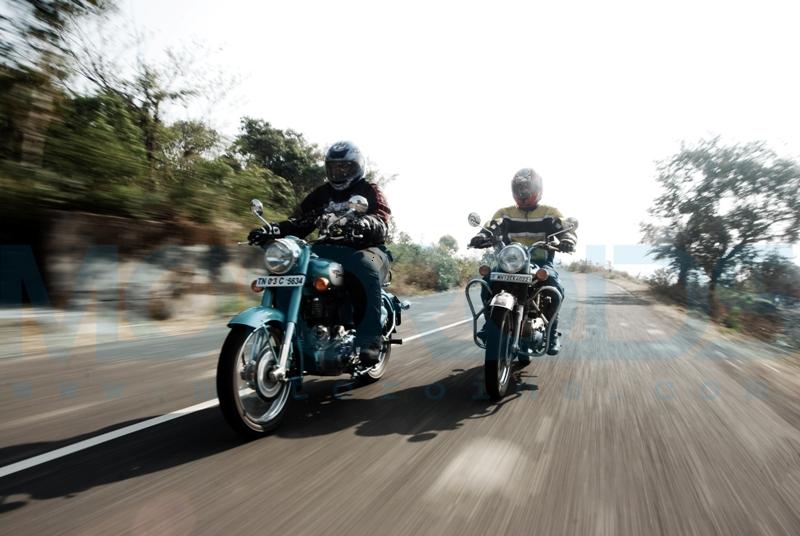 With a victory each under their belts, the Bullets now had to prove their agility around the corners. Knowing Mutha like the back of my hand, I set off on the C5 first. It would be stupid to say that the Classic did not handle like my Karizma, but nevertheless the bike was well planted in the corners. Can’t say the same about the seat though – the bugger kept shaking as if it were imitating Dev Anand’s ‘neck boogies’.

I have always been a big fan of the MRF Zappers, no matter what bike they are shod on and probably that gave me some extra confidence to push the bike (MRF marketing guys can write to me at gauri@motoroids.com for the endorsement money). The LB500 was the next to go. Frankly, it was a horror riding that bike after the C5! The 19” tyres have a tread pattern similar to a ’95 Bajaj M80 and did not handle any better either. The overall setup had a certain reluctance to lean into a corner and the braking required before every corner needs a ‘five-year’ planning in order to avoid a crash. As I returned back to the starting point, all I could give the LB500 was a negative nod. And that meant a lot of brownie points for the C5. 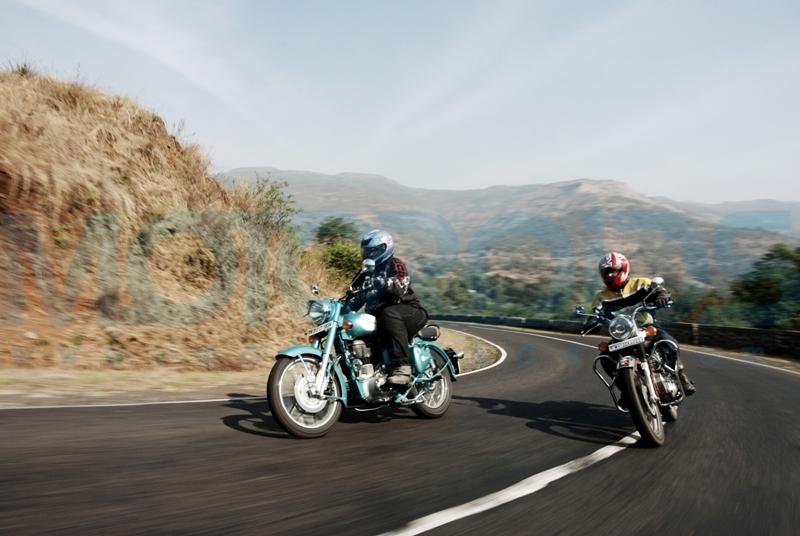 The fourth and final test for the two was a simple ‘trump card’ round. This was the last and final chance for the LB500 to prove its mettle. We sat over a coffee and compared the two bikes on a list of parameters illustrated on the final page of this comparo.

After a comparison between some bare minimum yet important stats, the LB500 gained a one up on the Classic by a narrow margin. So out of the four simple tests that we put the two bikes through, both the Bullets bagged two victories each – which essentially is a tie! So what is the verdict? 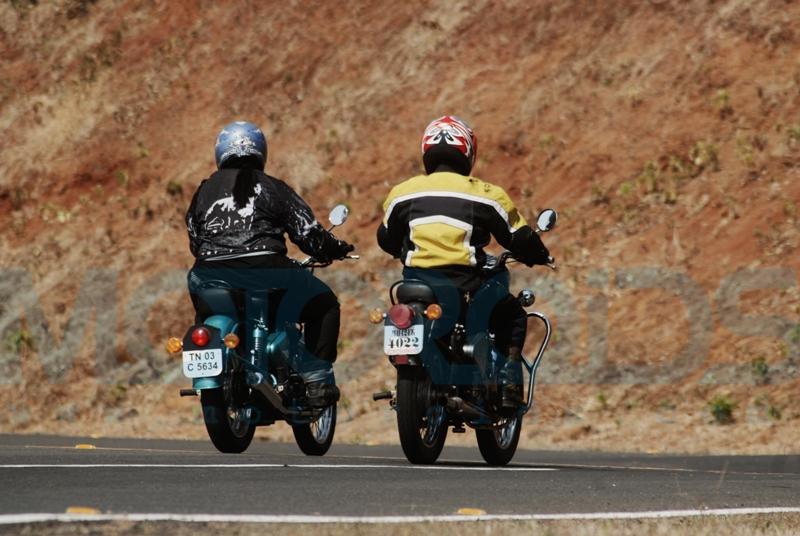 The LB500 undoubtedly gives you the best value for money. So if you already have one, the money involved in upgrading to the Classic is not justified. On the other hand,the LB500 excels over the C5 in outright acceleration and top speed, but then again, touring on a Bullet is not only about riding on straight roads – it includes a lot more, from twisties and high altitude slopes to off road patches and river crossings. And this is exactly where the Classic’s facets come into play – fuel injection, tubeless tyres, better handling characteristics, sprung seat etc. For a buyer looking for a brand new Bullet, RE has left very little choice when it comes to choosing the ultimate performance Bullet. So for now, C5 is the way to go!