Home Audi Audi Commences Production of the A3 Cabriolet

Audi has commenced the production of the new A3 Cabriolet. This redesigned convertible is based on the Volkswagen group’s MQB platform and features styling that closely echoes the A3 sedan which was caught testing again in India. 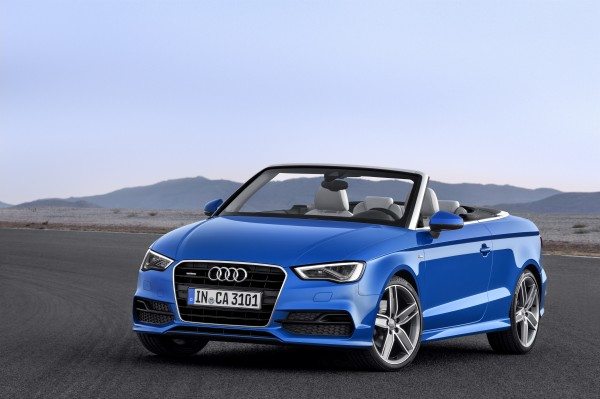 The new Audi A3 Cabriolet has grown compared to the previous model,  its length increased from 4.24 to 4.42 meters , its wheelbase from 2.58 to 2.60 meters and its width from 1.77 to 1.79 meters . Only its height (1.41 meters [4.63 ft]) was reduced by 15 millimeters.This gives the four-seat convertible a more elegant and sporty look on the road. Luggage capacity grew by 60 liters, and it is easier to load. The wheel housings can handle wheels up to 19 inches in size.
The front of the Audi A3 Cabriolet is characterized by the Single frame radiator grille. The flat headlights give it a resolute look; they emphasize the horizontal styling and the air intakes in the bumper. Audi offers headlights with LED technology as an option; they are the only LED headlights in the compact segment to offer variable headlight leveling control.
The rear overhang plays a key role in the harmonious proportions of the two-door car. The windshield frame is made of aluminum – and an aluminum-look trim strip runs around the entire car. On the flanks, the design features a taut tornado line and contoured sheet metal surfaces that create a fascinating interplay of light and shadow.

Engine options on the A3 Cabrio include the three newly developed engines: Two TFSI engines producing 140 hp and 180 hp  from 1.4 and 1.8 liters of engine displacement, respectively and the 2.0 TDI  which develops 150 hp. Other engines will follow – ranging from the 1.6 TDI with 110 hp to the 2.0 TFSI, which will power the Audi S3 Cabriolet with 300 hp. All engines in the new Audi A3 Cabriolet combine the technologies of direct injection, turbocharging and a start-stop-system.

The Audi A3 Cabriolet is currently available for order in Germany. Pricing of this cabrio starts at €31,700.