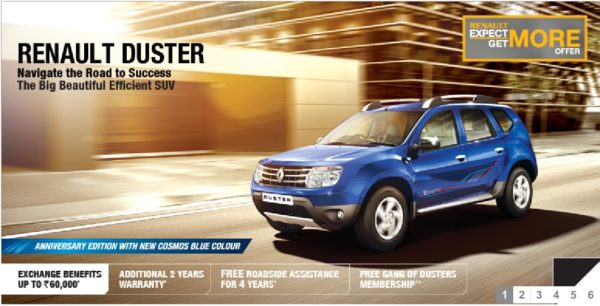 It is the first anniversary of the Renault Duster in India and the Indian subsidiary of Renault has decided to commemorate this occasion with a new special edition of its popular compact crossover.

The Renault Duster Anniversary Edition comes at a time when sales of the compact crossover have taken a dip. Call it the EcoSport effect or the result of general slowdown in the auto sector but the Renault Duster, which was once the highest selling SUV in Indian market, suddenly finds itself clocking just half the volumes it used to. The launch of the Nissan Terrano, which is essentially a re-badged Renault Duster, has made situation even worse for the Duster, especially for its higher variants.

While the new Renault Duster Anniversary Edition doesn’t bring along any substantial changes/additions that might lure the buyer away from the fresher competition, the addition of a new color could very well bestow the compact crossover with a sense of freshness and might end up appealing to a small section of buyers in this segment.

The new Renault Duster Anniversary Edition is based on the RxZ 110 PS flagship variant and hence, comes loaded with all the bells and whistles that come with the top end model. We haven’t yet received any official communication regarding the pricing but it is being said that the Anniversary Edition, which comes with a new paint job and some decals, would command a premium of around INR 40000 over the standard RxZ 110 variant.