I had a leisurely departure at 11 am and moved off in the direction of Keylong. The roads are generally good for the first part and the views are nice too as the ascent begins. 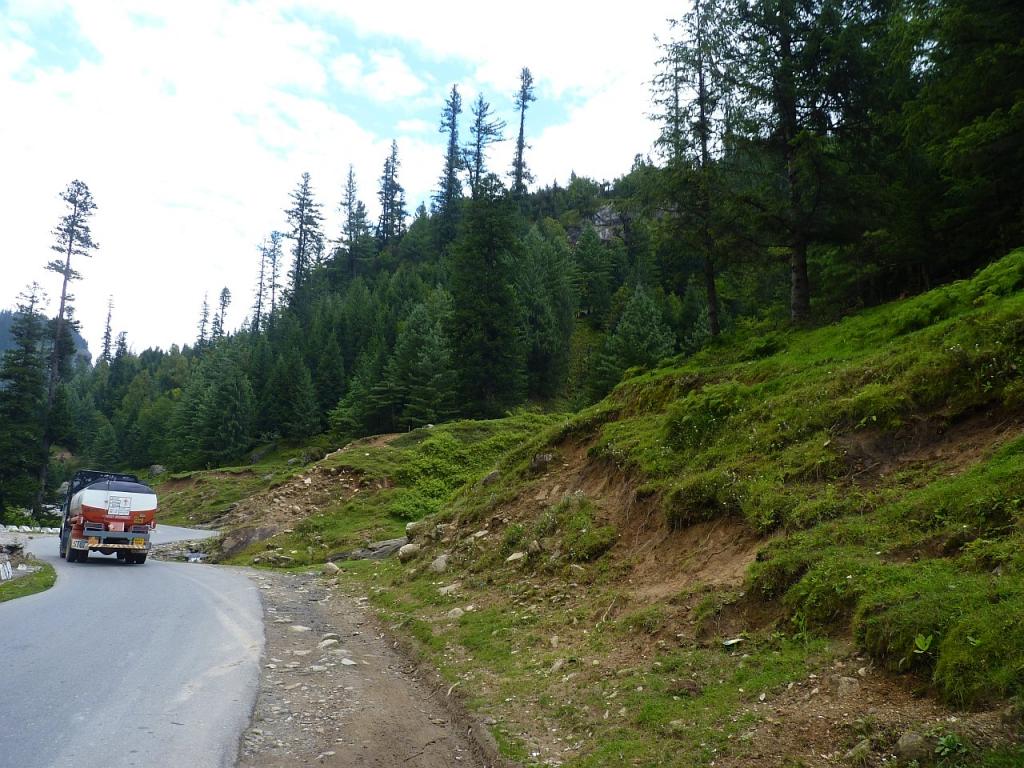 Manali, at 8000 feet soon starts to drop way below, and what surprised me some was the complete lack of traffic. Just the occasional vehicle, no more, and soon I’d get to see the reason for that. As usual, the road stated to deteriorate around Marhi, but the surprise was that ALL the shops were shuttered and bolted. It was a ghost town. Climbing further, the other reason became apparent.

No snow. None. Zero. There were a few tourist taxies at Rohtang top, and some people walking around the gravel strewn plateau. The surprise, though, was that Rohtang top had tarmac. Lest one get used to this luxury , though, it quickly vanishes as one starts the descent on the Koksar side, and one gets the familiar muddy rubble that passes for the Manali Leh “highway” on these parts. Fortunately, no slush at all – that is a consequence of snowmelt and clearly, there had been no snow at all for a few days. By 3:30 or so I had reached Keylong and went straight to the place I had stayed a few years ago, Drabla guest house.

Which was shut. Along with all the other shops etc in the building. Time to look around. A couple of circuits later I could not locate hotel Valley View (a sister hotel of the one at Vashist), so I finally selected a small guest house near the beginning of the bypass. Hotel Nalwa. You can see this on wikimapia. Coincidentally, this place is run by the uncle of the guy who used to run Drabla guest house… the man apparently runs a tourist taxi now. While there is running hot water and it is clean, the rooms are a bit cramped, and the restaurant food is somewhat mediocre as well. After a short nap, it was off to meet somebody who had done a wonderful jugaad on my Karizma a few years back – a mechanic called Chunni. His shop is just a hop and a skip away from Nalwa GH, and I’d thoroughly recommend him to anybody who needs to do any mechanical work there on his bike. He did not remember my face, but yes, he did remember the bike, and we had a chat for some time before I pushed off to explore other avenues as regards to food, and chanced upon a hotel Tashay Delac or some such where I had dinner. Unfortunately , I can only recommend that you give this place a miss.

I was feeling fine till that point of time, but back at the hotel, I started to get a nagging headache, which steadily got worse. I knew what it was but managed to get some sleep nonetheless to be woken up at the crack of dawn by some other guests who had decided to make the passageway out side the rooms their gathering point, and overjoyed at meeting one another again after a full 8? hours just stood there yakking away for a good half hour before finally moving away. Welcome to day 6

This was my official photography day, for which I’d taken an extra 8GB card along, and the battery charger for the camera. In the event, this turned out to be the “recover properly from AMS” day, the first half of which I spent recumbent on the hotel bed, skipping lunch as well. This can hurt more when it is cold, and you need the extra energy, but the room was small and warm, so……official photography day was officially scrubbed as getting fit was of paramount importance, as compared to taking scenery photos. Ultimately, I did take some photos, again, er, from the hotel.

The view from the hotel corridor leading to the rooms 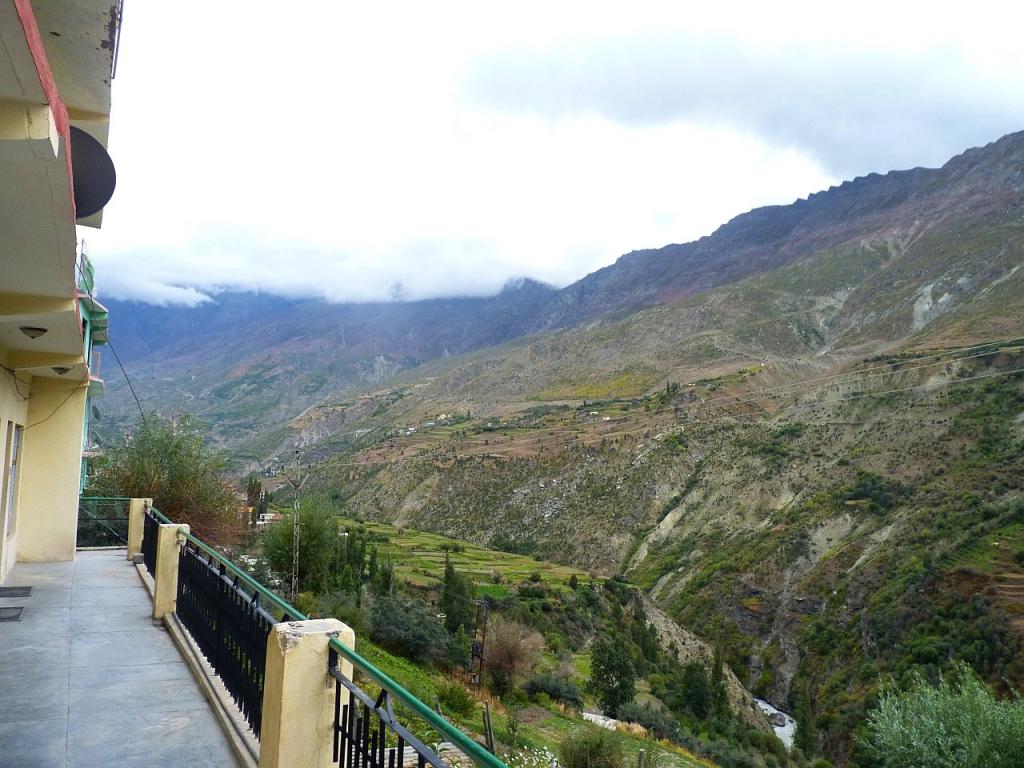 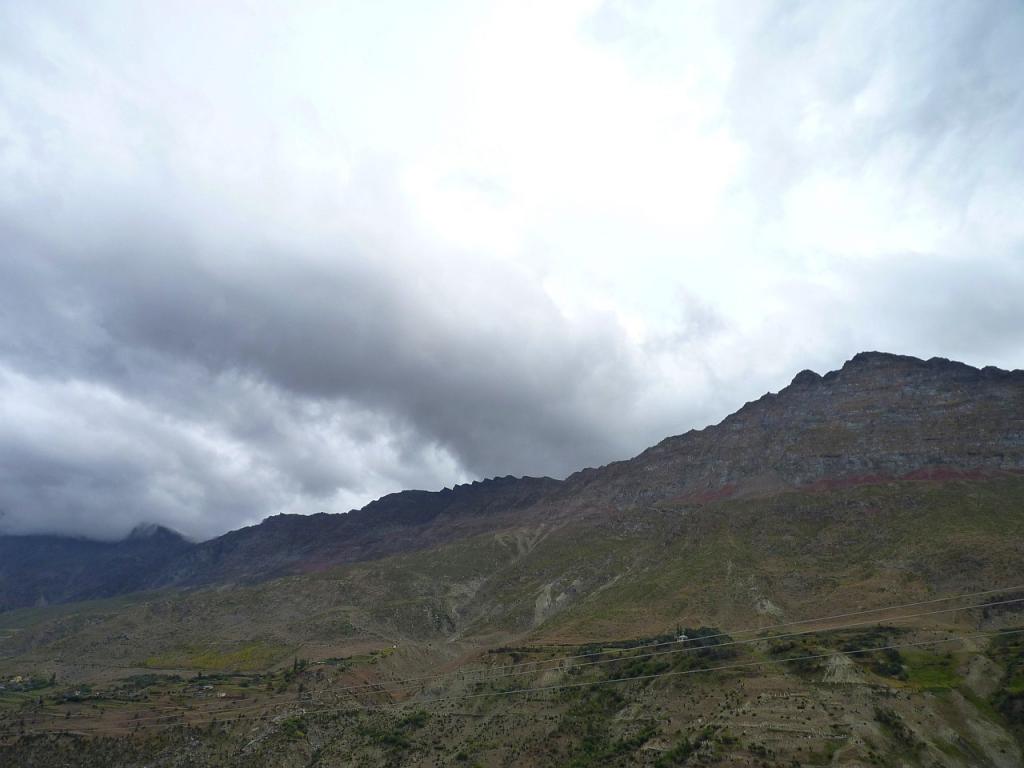 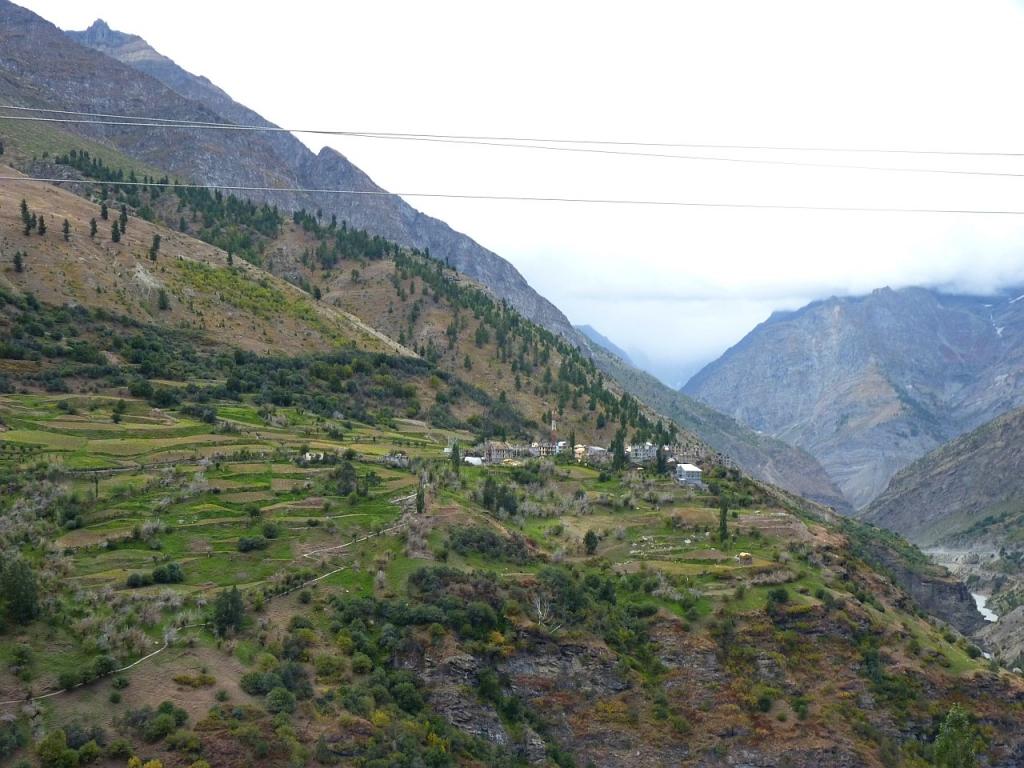 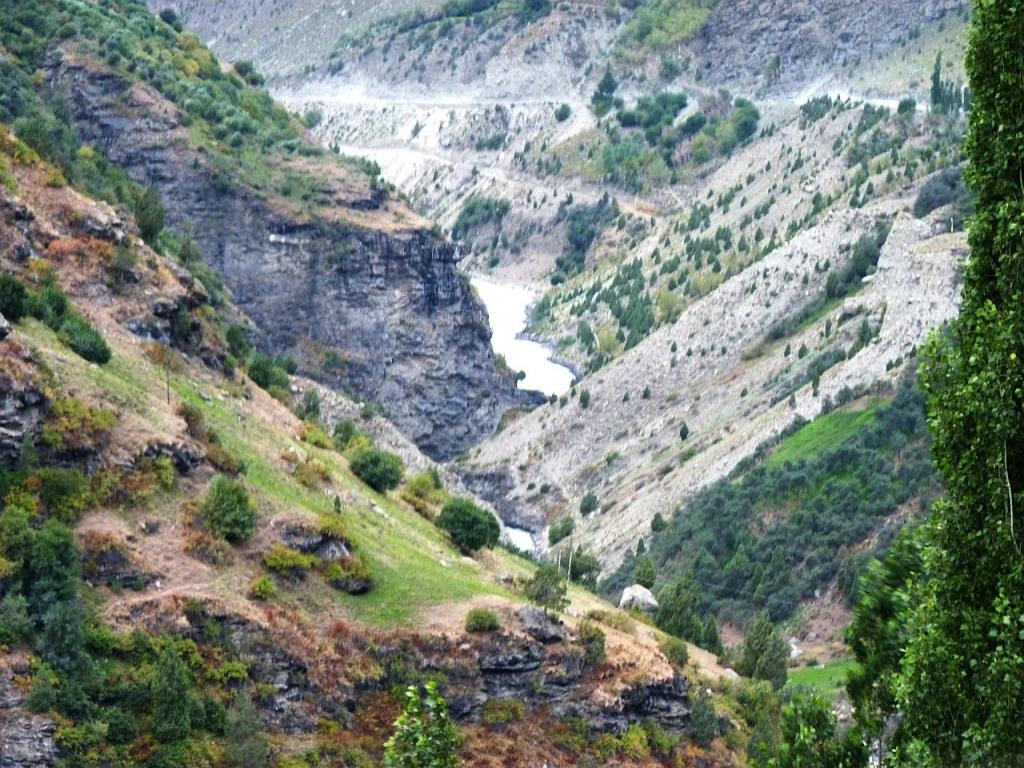 There are wires here too 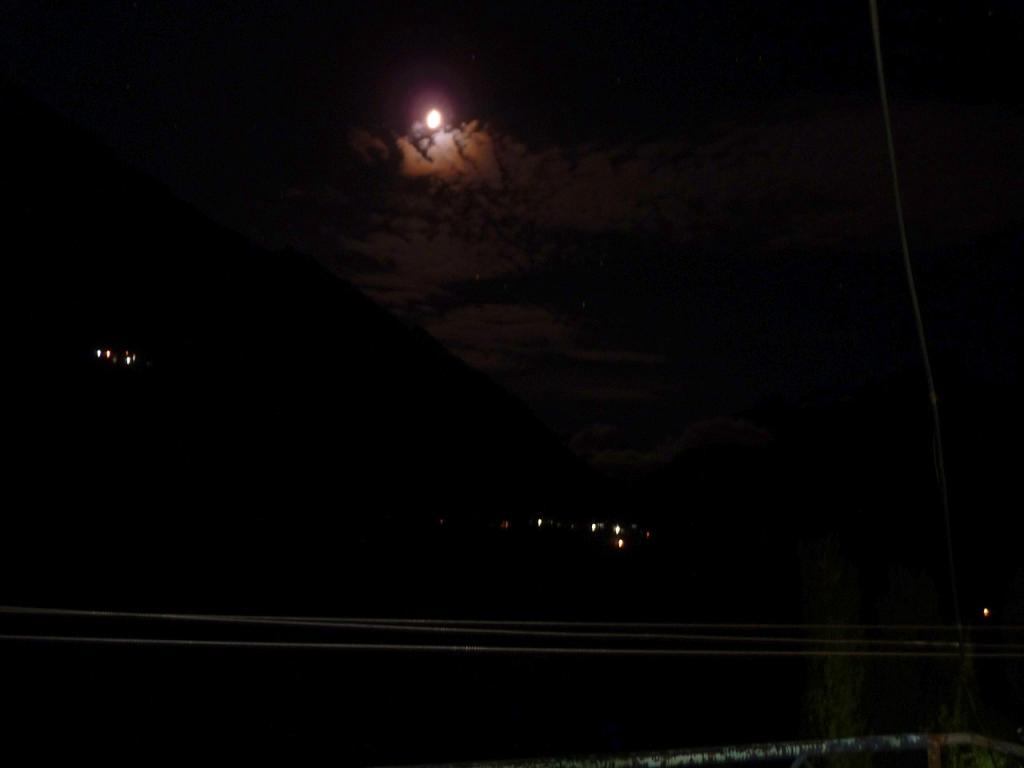 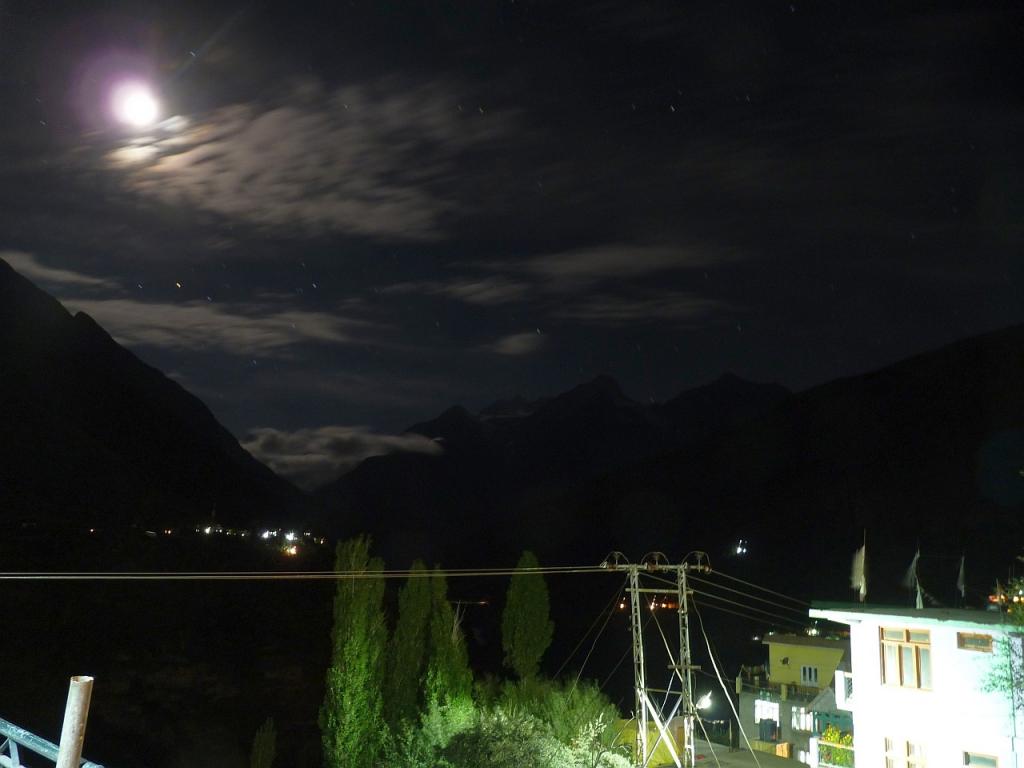 Perhaps I should call this lot the Keylongi wire collection…. 🙁

Finally, I started feeling better in the early evening so – the first job was to gas up, which I did after traveling some truly lousy roads till Tandi. Tandi may be about 10 odd km away, but the road is such hat the to and fro rip is almost an hour. I had passed Tandi the previous day, but the destnation Keylong being so close, I had not really been looking to see how good or bad the road was. I jolted back to Keylong as the sun set and it was now time for dinner. Nalwa was out and so was Tashay Delac as food sources, so this time it was to be the Gyaltsen. Third time lucky. The food was not really cheap but the portions were generous, and importantly, it tasted good. Recommended! There’s also some parking space nearby and one of the only cybercafés opposite, run by one Mr Dinesh. I managed to check my net there, after some 6 days.

Feeling a lot better with decent tasting food and minus the headache and nausea, I returned to my hotel to go to sleep, I had to leave the next morning for Leh, but I estimated that it would take about 10 or so hours, so I did not have to plan on leaving early, but could do so in a leisurely manner at 10 pm. I would be joining up with my school friend Piran and his group (he was coming from the Srinagar side with wife, brother and son in tow, along with a couple of business partners) – my only concern was that he should reach before me as he had made the bookings.