Lexus has shown its LF-NX concept car at two major motor shows this year. The LF-NX debuted in the Frankfurt Motor Show with a hybrid powertrain, and was also showcased at the Tokyo Motor Show featuring a 2.0-liter turbocharged gasoline engine.

Now, it has emerged that Lexus is already working on a production version of the SUV, which will reportedly be unveiled at the 2014 Geneva Motor Show next spring. This Lexus SUV will be a direct rival to the upcoming Jaguar SUV and the Range Rover Evoque. The production version will be highly inspired by the concept’s design. 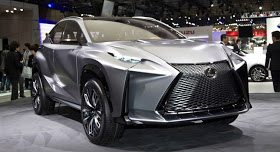 “What we’re finding is that these days customers want to be more expressive, so a lot of the concept’s inherent design will come out in the finished car,”  said Lexus’ European director Paul Van der Burgh.

“We’ve seen the finished design, we know what it will look like and it will definitely stand apart. Why would you want something that looked like everything else in the segment? Our customers have always wanted a combination of design and technology, but design has definitely become more important,” Van der Burgh added.

The production version of the LF-NX is expected to be available with both powertrains that were showcased on the concept version. The hybrid powertrain is capable of 220 HP, which is sourced from the IS 300h GS 300h models. The 2.0 liter petrol engine will be replacing the 2.5 liter motor in the future models.

Stay tuned to Motorids for more updates from the Geneva Motor Show.