Home Aprilia Aprilia SR 150 : Juicy details on what to expect, and what not to 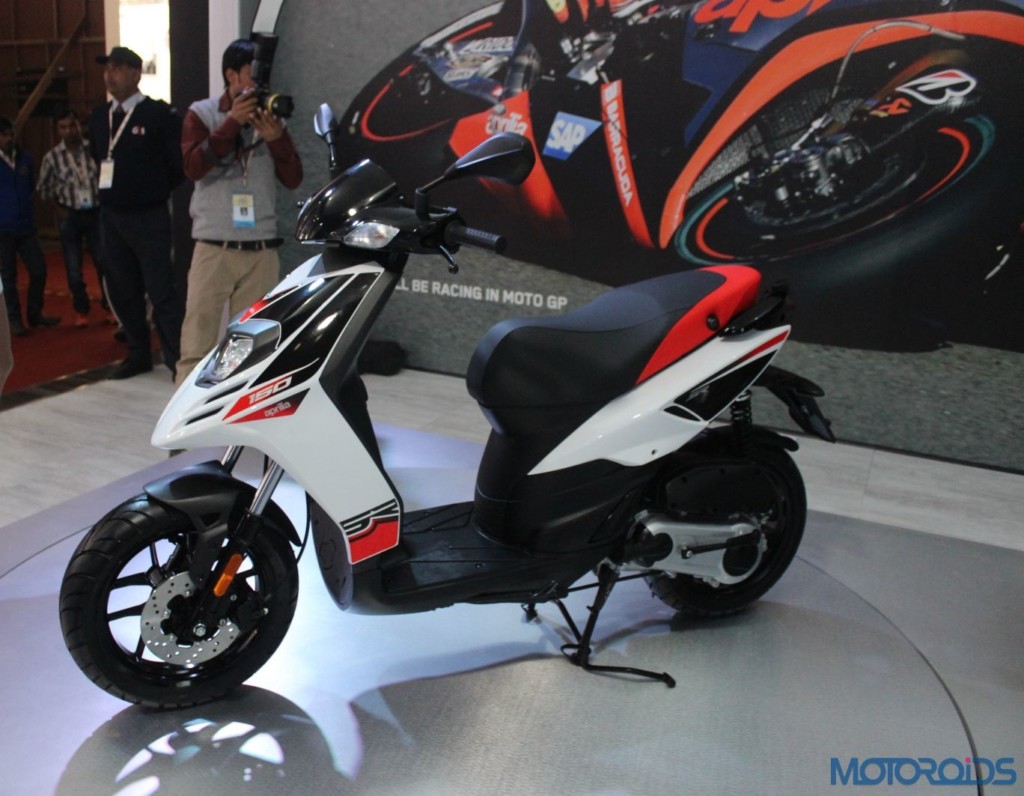 The Aprilia SR 150 has sent the fans of the Italian brand in a state of merriment ever since it was first showcased at the 2016 Auto Expo. A power scooter built in India, for India, by an exotic Italian marquee like Aprilia is a special happening – the enthusiasts, naturally, are gleefully rubbing their palms.

We recently met the top brass at Piaggio at a media dinner, and during the discussions, got to know a few really interesting details about the new scooter. So while Vespa, another Piaggio group brand has already been positioned in the premium segment, the SR 150 will try to unlock a different niche altogether.

As many of you would probably think, the ploy of introducing a high-priced product in a vehicle segment which is driven by value and efficiency could turn risky. We share the scepticism, and with that tinge of disbelief, we questioned the honchos at the Italian company. Delightfully, though, our questions were answered in a very convincing manner. Here’s what we learnt.

This is the most important bit, for if the SR150 is positioned as something it isn’t, it would have little to no chance of success in this extremely price conscious market. Thankfully, the good blokes at Piaggio know the fact better than anyone else.

To be clear, the SR 150 wouldn’t be positioned as a ‘thrill machine’ for the speed enthusiast. That 150cc engine with its limited power output isn’t a raw-thrill monger anyway – Piaggio understands that fact pretty darn well. Priced below the Rs 1 lakh mark, the SR 150 will target youngsters who care for their image, and require a truly premium, distinguished and appreciably zippy machine that performs well within the city. 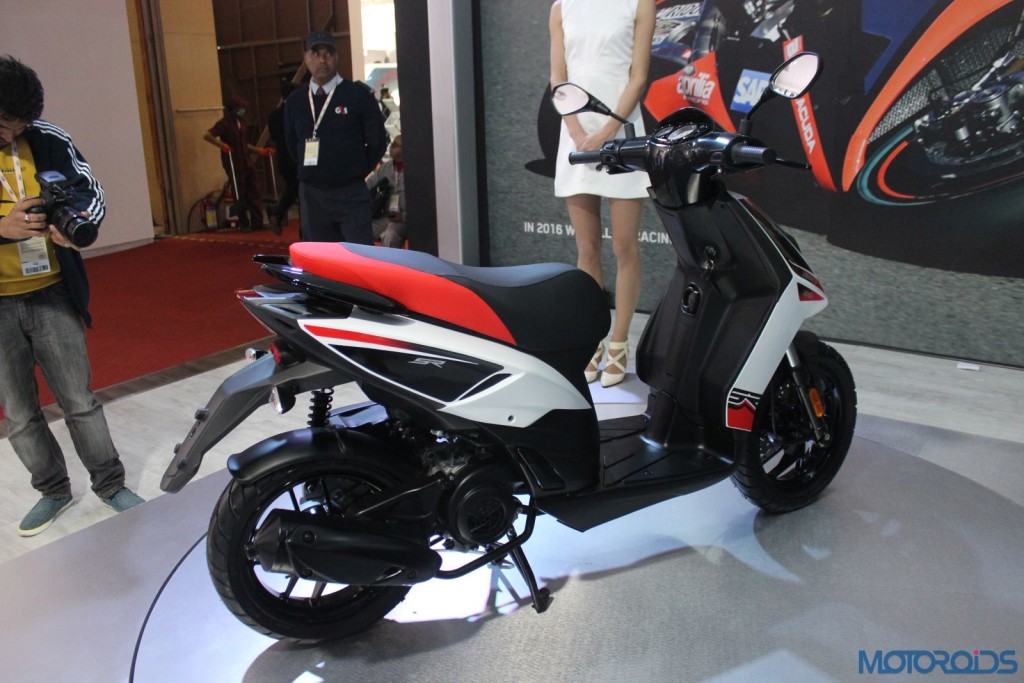 To create a sketch, these are youngsters from affluent families, who aspire riding powerful and premium two-wheeled machines for kicks, but aren’t permitted to swing a leg over such paraphernalia owing to their parents’ apprehensions about their child’s safety. Typically, this buyer group (parents, not the kids, mind) considers scooters to be a much safer option over their motorcycle counterparts. Also, the relatively moderate cubic capacity of 150cc will make the SR150 more ‘arguable’ for the teens. The SR150 will offer style, performance, exclusivity and safety to an audience which doesn’t wish to merge with the crowd.

In terms of performance, it’s important to stress on the ‘within the city’ part here, as Aprilia is very clear about where the SR150 will excel. It’s meant to be enjoyed within the urbanscape, and not meant to mark its authority on the open highways.

In terms of styling, Aprilia doesn’t wish to categorize the SR 150 as a scooter. For them, it’s a machine that offers the practicality, comfort and convenience of a scooter, and the sharp styling, dynamic ability and sportiness of a motorcycle. The SR 150 would try and present itself as a totally unique proposition, a ‘crossover’ of sorts for the two wheeler world, if you will.

That the SR 150 will come equipped with a 150cc motor is no secret. The engine will be more or less the same as the one on the Vespa range, though the state of tune might be slightly different. The air-cooled, 3-valve motor will dish out more or less the same numbers, which are rated at 12PS and 11.5 Nm on the Vespa. What would, however, be different is the transmission. The CVT transmission on the SR 150 will be significantly different from the one of the Vespas, and with its quicker reaction to throttle, will make the bike feel zippier and more alive. 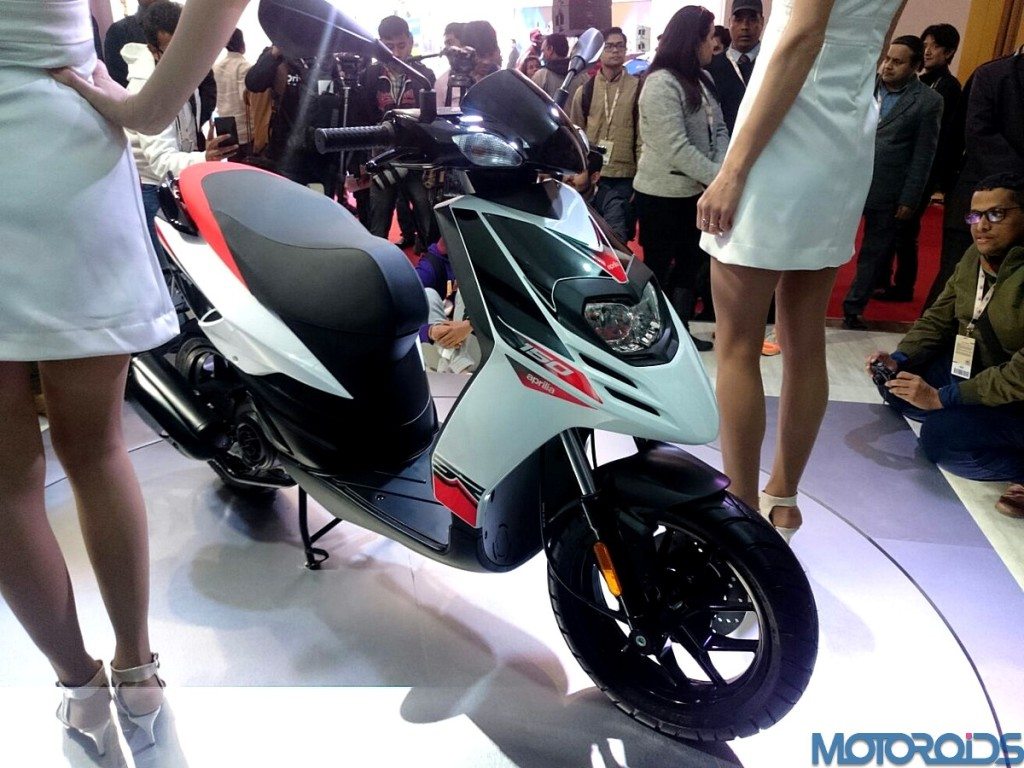 Quicker acceleration off the block, better throttle response, superior riding dynamics and a kerb weight which would be lighter by 5-6 kg will ensure that the SR 150 would feel substantially livelier than its Vespa counterparts.

The Aprilia SR 150 will be built at Piaggio’s plant in Baramati, Maharashtra, where the Vespa scooters are also manufactured. The power scoot features large 14-inch wheels at both ends for solid dynamics and a sporty stance. The wheels are wrapped with wide 120/70 section tyres at both ends with a disc unit performing anchoring duty up front and a drum brake at the rear The instrument cluster is a simplistic unit with a twin pod analogue setup for speedo, odo, fuel guage and other tell tale lights. Fuel tank capacity stands at 7 litres.

While there’s no official word on the launch dates, we understand that the new motorcycle is pretty close to hitting production with prototypes already doing the rounds. We expect Piaggio to launch the SR150 in the next couple of months. The SR 150 will sell alongside Vespa scooters at Piaggio’s dealerships which will slowly be upgraded to accommodate the premium offerings from the group.

What do you think about the Aprilia SR 150’s chances in India? Will it be able to create a new segment for itself, or is it an exercise in futility? Do let us know your thoughts through the comments section below, or via one of our social channels.