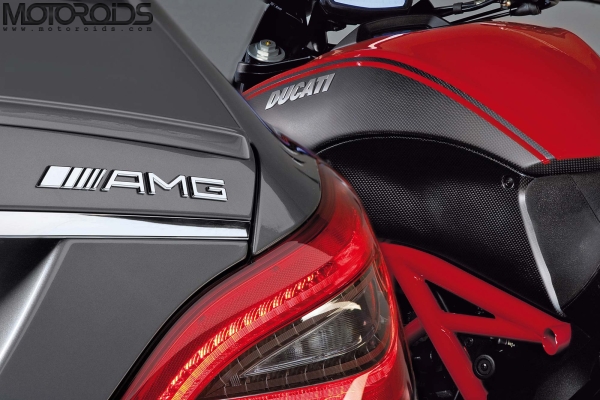 Ducati and Mercedes Benz’s tuning house, AMG, announced a new partnership at the 2010 L. A. Auto Show. AMG will now be the primary sponsor for the Ducati MotoGP Factory Team which will have Valentino Rossi and Nicky Hayden on board. Speculations were rife that 2011 would see a three-way Italian partnership with Rossi on a Ducati GP11 bike with FIAT title sponsorship, but the announcement by AMG has put all these to rest. Its a strategic partnership where AMG will sponsor Ducati for its 2011 MotoGP operations and similarly, Ducati may be involved in sponsorships for AMG’s motorsports activities.

Since Rossi has just undergone his shoulder surgery and is still healing back in Italy, his teammate, Nicky Hayden, was the solo rider present at the L. A. Auto Show during the AMG-Ducati partnership announcement. Also present was Ducati CEO Gabriele del Torchio, who said, “In AMG we have found a partner who perfectly reflects our brand values of high performance, motorsport, excitement and our sense of unmistakable style and design.”