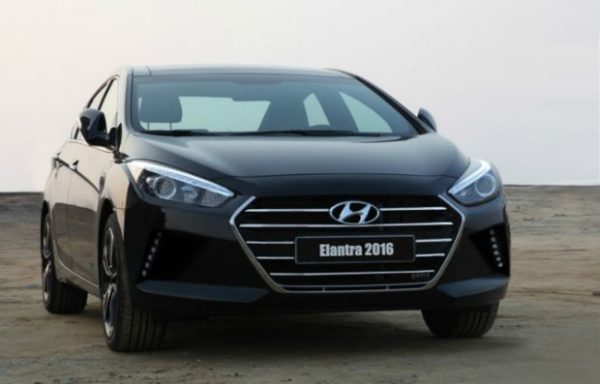 The vehicle you see here in the picture above may look like a crossover but it’s allegedly the 2016 Hyundai Elantra. If some reports are to be believed the car is slated to be unveiled officially in the Korean market next month.

The new generation Elantra shares its design cues with its i30 and i40 cousins. The organic, curvy lines of the current gen Elantra which honestly made us think of it as one of the best designed cars in its segment, have been replaced with some brawn. An imposing hexagonal grille with chrome lining and five chrome drenched slats define the face of the car.

The headlamps, with their LED DRLs remind us vaguely of the new Mercedes-Benz cars. We can also see projector headlamps peeping through those housings. A powerful, high bonnet with a steeply raking front windscreen make the new Elantra look much bolder and more muscular than the model it’s supposed to replace. Do we like the new design? We really can’t say conclusively until we have seen the car fully, but the first impressions aren’t very positive. And that’s not because the new gen model looks ugly, it’s just because we think the current generation car look much better. The new car has reportedly been designed at the Hyundai Motor European design center in Rüsselsheim, Germany.

The car will likely share its 1.6 liter, 175PS powerplant with the new generation Tucson. Transmission duties will be taken care of by a 6-speed manual or a 7-speed dual-clutch automatic. The new car, known as the Avante in its home market will be launched by mid-2016.

Do you like the styling of the new car? Do let us know your thoughts and opinions via comments.