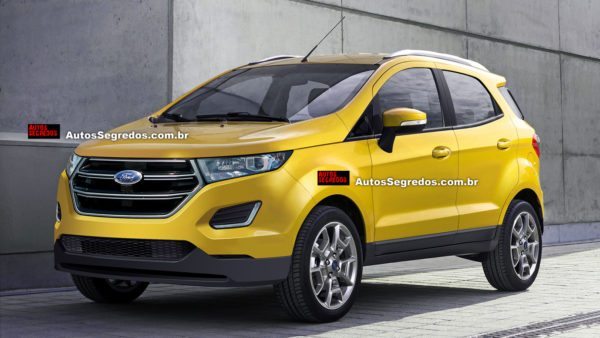 A speculative rendering of the 2016 Ford Ecosport facelift makes it wear the face of a Ford Edge –  a premium crossover sold and manufactured in the US, which rides on the company’s global mid-size vehicle platform and uses the same architecture as the latest Fusion/Mondeo. The face-lift is expected to take shape next year.

The new fascia comprises of a huge, trapezoidal grille with chrome slats, slim headlamps with square shaped projectors and L-shaped fog-lights. enclosures. Mechanically, the car is expected to be the same. According to the report, there’ll also be a new 1.5 liter petrol engine based on the Ecoboost architecture.

This is not be confused with the recent face-lift that the Ecosport was dealt with, which includes the new Ecosport S and does away with the spare wheel to account for a cleaner looking rear end – apparently the original’s styling received flak in Europe for being too brash.

The 2016 facelift will imbibe the recent changes made to the drive-train including reduced gearbox torque truncation in lower gears for better availability of torque for both EcoBoost and TDCi diesel. The power-trains have also been upgraded to EU6.1 norm. As a result, the upgraded diesel engine on the new Ecosport now produces 5 more PS of power.