A test mule of the 2015 Yamaha FZ has been spied without camouflage by the folks at IamaBiker.com. From the spyshot, the test mule appears to be quite similar to the FZ-S version 2.0 concept that had been showcased at the Delhi Auto Expo 2014. 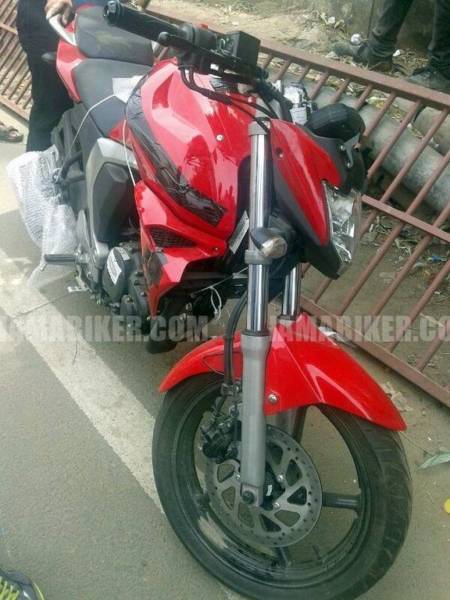 Could this test mule be the production version? We can’t say for sure. But the bike does appear to be very close to its last stages of testing. Even though the test mule doesn’t carry rear view mirrors and a registration plate holder at the front, the paint scheme is immaculate. One can notice that there is a black tape on the surface of the fuel tank. It might be a possible step to hide the decals that scream FZ. Could be a three-dimensional FZ logo that is being hidden?

Quite a few inspirations for the design of the 2015 Yamaha FZ have been ripped off from the old FZ itself. These include the headlamp unit with a goatee-like parking lamp and the muscular fuel tank. The tank scoops, however, have received a redesign. Note the black taping on the tank scoops; in the older FZ there used to be the familiar Tuning Fork logo of Yamaha at the exactly same place. Other new additions are the split seat and the rear grab handle. The 2015 Yamaha FZ also gets a new exhaust tip.

The Yamaha FZ, at the time of its introduction into the market, came like a whiff of fresh air. With its muscular design and the widest rear tyre in its segment ( And above it, too ) , the Yamaha FZ set the tone for a new design theme. The engine was a gem-of-a-powerplant, with plenty of torque available in the low and mid-ranges. The only pitfall was its fuel efficiency; it being a tad lesser than its competitors also compounded the fact that the bike came at a premium over other brands.

Do you feel Yamaha could reduce the width of the rear tyre on the 2015 Yamaha FZ to increase fuel-efficiency? Doing so will hurt the brawny image that the older FZ had carved out for itself and its further generations. Yamaha has also been in the news for plans to introduce a new, cheap Fuel-Injection on its small-capacity bikes. This FI system might have found its way on to the 2015 Yamaha FZ. Expect a price rise as compared to the older model if the FI unit is introduced on the 2015 Yamaha FZ.

Small-capacity bikes inspired by the Streetfighter theme have been flooding the market; the Suzuki Gixxer and the Honda CB Trigger being a few. What does the Yamaha 2015 FZ need to retain its Lord of the Streets tag??