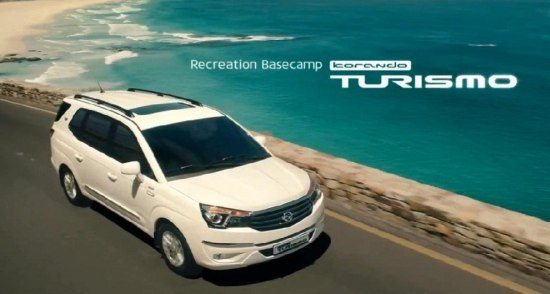 We reported in detail when  Mahindra group owned Ssangyong unveiled the details of its all new Korando Turismo that will make its public debut at the Gangnam Seoul Trade Exhibition and Convention Center, South Korea on February 5th.

The new Ssangyong Korando Turismo is essentially the next generation of the Ssangyong Rodius and is slated to go on sale at its home market in mid 2013.

The styling of the new Turismo, or the next generation Rodius, is surely a breath of fresh air when compared with that of the current generation.

The front fascia of Korando Turismo gets a chunky headlamps cluster, a gigantic grill and an air dam which is split into two. At the rear, the car is adorned with stylish tail lamps and the rear bumper gets integrated reflectors. One of the eye catchy details of the side profile is the quarter glass at the A pillar and stylish alloy wheels.

On the inside, the car gets a 4 spoke steering wheel, better dashboard layout and a large multimedia screen.

Powering the new Rodius will be the same 2.0 litre, 155 bhp diesel engine that powers the Korando and the Actyon. Also on the cards is be a 3.2L petrol engine with all-wheel drive system.

It has emerged that Mr. Anand Mahindra, the head at Mahindra & Mahindra, has tweeted that he is excited about the Korando Turismo’s potential in the Indian car market.

Hence, there might be some chances of the new vehicle making it our country and going by the Rexton’s India price, the Korando Turismo might come to us with an attractive price tag.