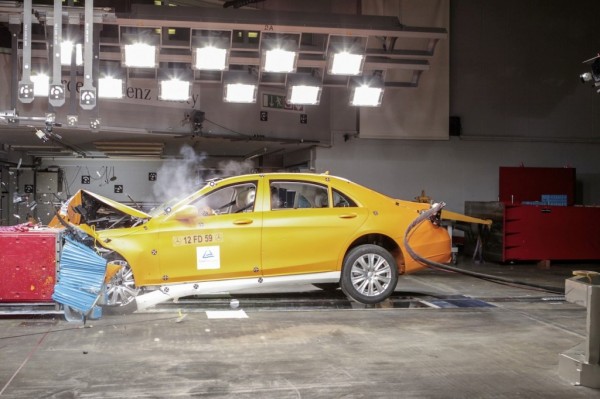 We reported in detail when the 2014 Mercedes S Class recently made its public debut. The new 2014 S Class looks poised to raise the bar in its segment and become the next big thing in opulence, safety and style.

The car comes loaded with safety features such as Active Parking Assist, Active Lane Keeping Assist, Night View Assist Plus, Distronic Plus with Steering Assist, Brake Assist Plus with Cross-Traffic Assist, Pre-Safe Brake with pedestrian recognition etc. The car also benefits from a stronger construction that would enable the Merc flagship sedan to offer more safety in an event of crash.

While we are still waiting for the Euro NCAP’s report on the safety quotient of the new S Class, here are a few images of Mercedes S Class undergoing some crash tests. The car has performed really well in these tests and the word is that the car will definitely score a 5 star rating in Euro NCAP tests. We aren’t too surprised, what with the new car being touted as the safest S Class ever? Also, the S Class has always been known for offering high safety to its occupants and the level of safety is expected to go even higher with the advent of the new W222 S Class. 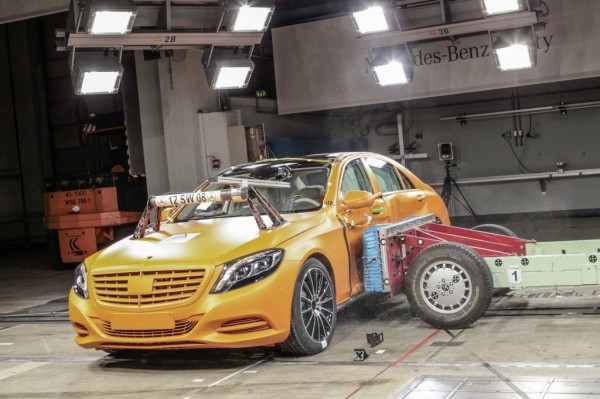 Other than having a host of active and passive safety features, the new gen S Class comes ‘overloaded’ with gizmos and has features such as seats with ENERGIZING massage system, integrated telephone for rear seats and a high end Burmester® High-End 3D Surround Sound system with 24 high-performance speakers and 24 separate amplifier channels with a total output of 1540 watts with a set of 12.3 inch TFT screens for in car audio visual entertainment among others. A new feature called AIR-BALANCE package takes care of perfume atomisation in 4 different fragrances, ionisation and efficient filtration inside the car. The THERMOTRONIC automatic climate control in the rear has two additional cooling zones. The new car benefits from ROAD SURFACE SCAN (optional) that detects undulations in the road surface through the stereo camera and the MAGIC BODY CONTROL tunes up the suspension to tackle the changing surfaces in real time. The standard equipment for the new S-Class reads an Adaptive Damping System ADS PLUS and an improved version of AIRMATIC full air suspension system.

Powering the new S Class is a 4.7 litre twin turbo V8 pumping 455 bhp and 700 nm of torque. Power is transmitted to rear wheels via a 7 speed auto transmission. The new S-Class motor is claimed to be extremely frugal for its class and implementation of “Efficient Technology” has almost halved fuel consumption to 4.4 litres per 100 kilometres.  Mercedes claims a 0-100 kph sprint of 4.8 seconds for the new S Class.