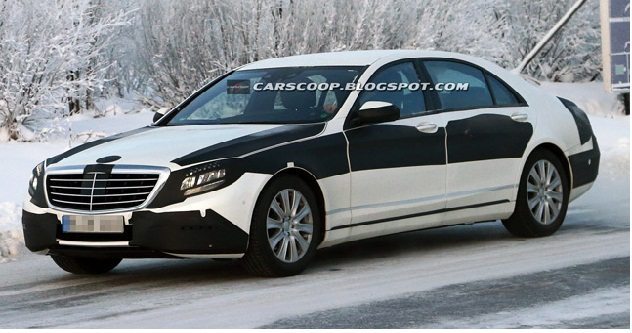 The upcoming generation of Mercedes S Class has been caught again. The next S Class, which promises to reclaim the status of being the safest car in the world, is gradually shedding all the camouflage and our guess is that the day is not far when we will have a totally undisguised spy pic of the upcoming car.

On the inside, the car will get a new dashboard that will sport a massive TFT screen, customizable displays for the instrument panel and a high end infotainment system.

The new S-Class will come with an ‘aluminum-intensive unibody’ with four-link front and multi-link rear suspensions that come with the new Magic Ride Control system. This system makes use of a set of cameras to scan the road and adjust the suspension accordingly.

The new sedan will be available in as many as six variants. One of these variants will be a S-Class convertible that will cater to the open-air limousine market. Rumors suggest that Mercedes will put an end to the CL Class and replace it with the S Class coupe.

Coming back to the sedan, the new flagship five-door will be marginally bigger than the current car and will also get a line up of new power options that will consist of a few petrol engines, an oil burner and a plug-in hybrid.

Codenamed as W222, the new S Class will most probably make its public debut at the Frankfurt Motor Show and will go on sale towards mid 2014.