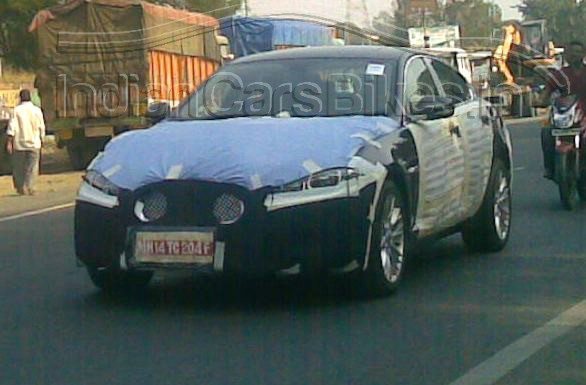 Our friends at ICB have spotted a Jaguar XF Facelift being tested on Indian roads! The Jaguar XF facelift was unveiled at the 2011 New York Motor Show and we are glad about the fact that the Tata owned British manufacturer has been quick in brining the car to India. It is being said that the car would come to us with the entry level 2.2 Liter turbo diesel motor.

This is the same engine that also powers the Land Rover Freelander2 and the Range Rover Evoque . This 2.2 Liter-4 cylinder oil burner pumps out a peak power-torque output of 190Bhp-190Nm. The engine is mated to an 8 speed automatic transmission. The engine offers stellar fuel efficiency and on the same time, is sufficiently potent to propel the upcoming Jag.

The car is expected to come with a price tag of INR 40 lakhs.