Home Honda 2012 Honda CR-V spied, to have a third row of seats 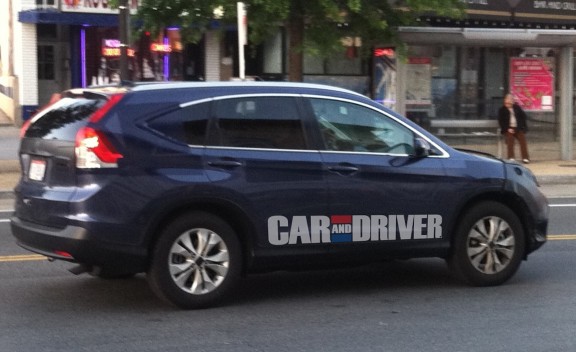 Speculations on the shape and size of the 2012 CR-V have been rife on the internet for a long time now. The engineers at Honda, however, very skillfully managed to keep the newest avatar of their baby away from the voyeuristic lenses of auto enthusiasts. But all that ends with the emergence of the latest spy pictures of the car. One of the readers of Car and Driver managed to click pictures of this illusive machine.

Unlike the new Honda Civic, which wasn’t altered much from its earlier version, the new CR-V seems to have undergone a major overhaul for its shape. In its newest iteration, the CR-V is much bigger than its predecessor, and going by the shape of its tailgate, seems to have space for a third row of seats as well. Interestingly, the kink in the D pillar of the new CR-V is reminiscent of the Volvo XC60. Is Honda trying to ape the Swedish brand for space optimization?

The new CR-V seems to be a tad longer than the current version. The car looks beefier, and for me, decidedly more handsome with the added brawn. The shape of the new car is clearly visibly with hardly any cladding on the profile and at the rear.

The engine is expected to remain unchanged. The new-CR-V will also be propelled by a 2.4-liter NA four cylinder engine, albeit with slightly higher output and better fuel efficiency. Now this isn’t exactly music to us Indian’s ears – who desperately want a diesel unit to be thrown into the bonnet of this fabulous crossover. The Cr-V desperately needs a diesel engine for emerging countries like India, if it has to give itself a fighting chance to survive the tough competition it faces.

What do you think of the new CR-V’s design? Sure it’s visible only from one angle, but would you put your money on it with or without a diesel option? Do let us know. You can also discuss the new CR-V in our Talks section