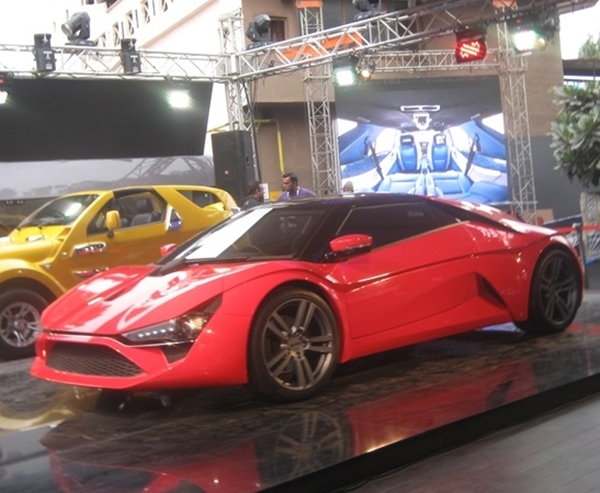 Yesterday, in the presence of a lot of car fans at the Expo, popular Indian automotive design house, DC Design unveiled its supercar called the Avanti. When launched, the car should be priced at Rs.25-30 lakhs and should get the title of being the most affordable supercar on planet. The car has been named after the Studbaker Avanti that appeared in Tintin comics.

The car was unveiled by Amitabh Bachchan and will initially sport a 265bhp turbocharged 4-cylinder petrol engine from Ford.Later, a 400 bhp turbo V6 Honda will be summoned to do the duty beneath the hood. The Avante weighs around 1560 kgs and that should make the Avanti to clock ton from nothing in a quick 6-7 second zero to hundred timing. The engines are mated to a 6-speed dual-clutch transmission system. These engines will be imported from UK and so will be other components.  However, the body and interiors are being manufactured at DC’s Talegaon plant in Pune. The body shell is made of aluminium, while the body panels are made of GRP.

If red paintjob may be ignored for a second, the 1560 kg Avanti looks some what like the Lotus Evora sportscar, rather than a typical supercar. Taking the power to weight ratio and other technicalities in account, even the performance though good, cannot really be in the supercar territory. We wonder why the firm refers to their brainchild as a supercar and we are disappointed. As we told earlier, DC Design aims on selling 200 cars a year and also plans to launch its dealerships at many cities across the country.