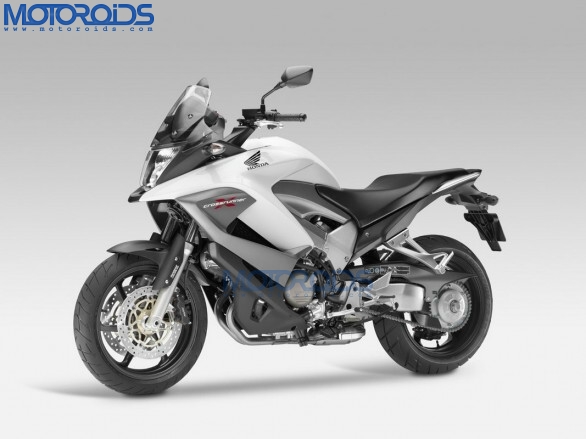 Honda has unveiled the much hyped ‘Crossrunner 800’ – an adventure sports bike made for tarmac. The Crossrunner uses a 800cc engine which is evolved from the yesteryear’s VFR 800. Honda says that the Crossrunner combines the best bits of a street bike (straight/upright handle bars, single/long seat) and an adventure bike (high rise fenders) without the high seating or bouncy suspension of an all-out adventure bike. Instead this machine uses more urban dynamics and the 800cc engine’s VTEC system as been reworked for smoother power delivery and no sudden surge that one used to get from the VFR800 at 6,000rpm.

The Crossrunner uses a chain final drive and incorporates Honda’s acclaimed Combined Anti-lock Braking System as well. The tank capacity is 21 litres, however Honda has made no claims yet about the fuel efficiency of the reworked engine. The Crossrunner will be positioned between Honda’s naked street bikes and the hardcore CrossTour (when it goes into production). The CrossTour will be an all-out adventure machine with hardcore off-road capabilities. More details on the CrossTour can be found here.

Whether Honda India brings this machine to India, remains to be seen. Stay tuned to Motoroids as we bring you the detailed specs of the Crossrunner as and when it is available to us.

More images on the next page>>>

Image Gallery of the 2011 Honda Crossrunner: