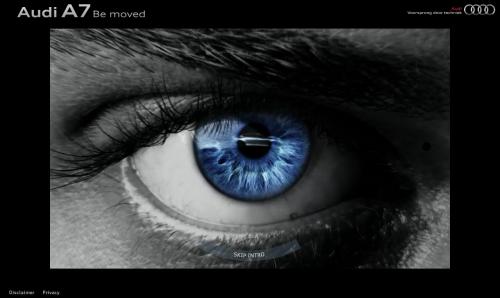 Audi is already paving way for the launch of its upcoming A7 Sportback which will compete with the likes of Mercedes CLS and Porsche Panamera. Audi’s Dutch division has launched a microsite that literally brings the saloon to your eyes!
Sadly, the teaser website is entirely in Dutch. But thanks to Google Translator, we have managed to decipher the opening message partly – “The Audi A7 is a car which catches the eye directly. Its impressing irradiation is the result of the combination of daring design, very powerful performance and newest technologies. A car in which an extremely sport -loving appearance meets with ruimtelijkeid (Excuse us, but did not get the translation for this word. Who said Google is perfect?) and innovation. Are you seized by the Audi A7? Stay tuned on this site for more information.” Pheewww! Hopefully, the  “more information” part will be joined by other languages like English too! The site also invites interested buyers to register and log in for information updates.
The four door, four seater Sportback is believed to have everything from diesel, electric hybrids to 600 horsepower V10 engines under the hood of one variant or the other. A 6-speed manual gearbox and 8-speed automatic will be available in the lower spec models while a 7-speed dual-clutch unit is expected to be offered in the higher variants. The new A7 Sportback is set to make its debut next month at the 2010 Moscow Motor Show.
To visit the teaser website click here.