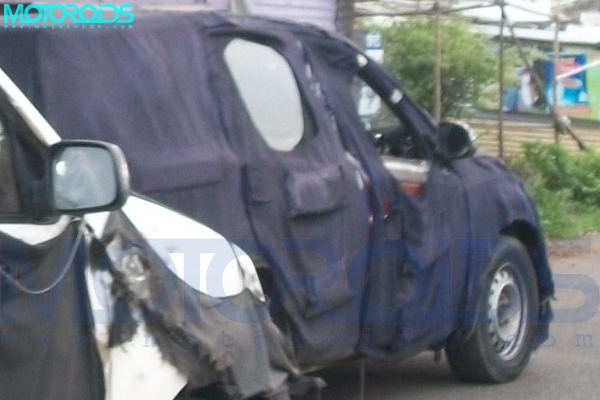 Thanks to one of our avid readers, we have a bunch of new spy shots of the Mahindra and Mahindra 5-seater Xylo mini-SUV. The blokes at Autocar India brought out the early spy shots of the 5-seater Xylo some time back. While those spy shots (refer to the images below) showed the upcoming mini-SUVs frontal design, the new scoop shots we have show the interiors to an extent.

The steering wheel is the same as that on the Xylo. The instrumentation cluster seems to have a new design in this prototype as compared to the console on the Xylo MUV

Design of the door panel is different than the Xylo. We hope the round cut in the panel is for housing the locking mechanism and not for a speaker

As you can see in the images above, the new mini Xylo is not only about a shortened wheelbase but also about a new arrangement for the internal elements. One of the vehicles caught on test did not have any furnishing as you can see in the photos. However the second vehicle (white) looks like a fully furnished model but unfortunately our reader could not take any photos of its interiors. From the input he gave us though, the white vehicle’s interiors were finished in beige and looked very spacious as compared to his friend’s new Maruti Suzuki Wagon-R. It was witty of him to highlight this fact because he also claims that the mini Xylo was more or less of the same height as the Wagon-R that our friends were driving. The 5-seater Xylo however looked a tad wider.

Interiors of the Xylo MUV

This vehicle will mark M&M’s entry into the mini-SUV segment of the market, which at this stage, is very nascent. The only player in this segment is the Premier Rio. The 5-seater Xylo, being a product from a market major, will give a big boost to this segment and could have more players like Tata, Maruti Suzuki, Hyundai etc. joining the party. The mini Xylo is expected to be priced between the 4.5-6.5 rupee price bracket, where it will take on the hatchback / supermini market. As we told you earlier, the mini-SUVs less-than-four-meter length will attract only 10% duty as compared to 22% central excise levied on bigger cars. The smaller Xylo is expected to go on sale in Q1 2011.