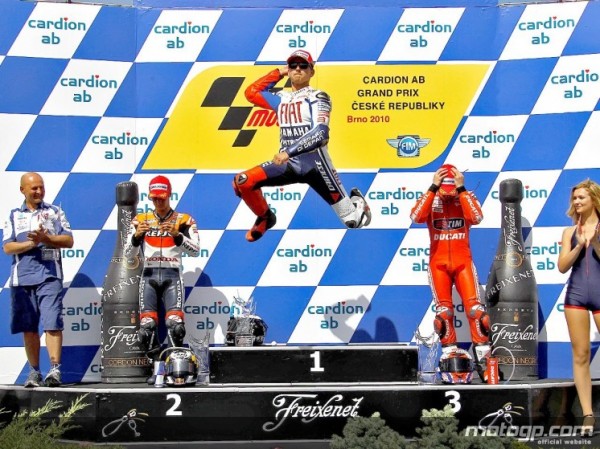 Jorge Lorenzo is surely on his way to win his 1st Moto Gp world championship after he clinched 7th win of the year. The qualifying round of Czech GP was one of most dramatic ones as many riders crashed during the session. Both Fiat Yamaha riders crashed at closing stages of qualifying. Valentino Rossi was furious with himself as he was in sight of securing the pole position. Later on Dani Pedrosa got the pole position with Ben spies along side him in 2nd position. This was the Texan’s  1st front row start.
On race day weather conditions came back to normal after few rainy moments. Rossi got a bad start. He lost as many as three positions just as all the riders were going into the first corner. Jorge Lorenzo was comfortably leading the race just after two corners. Ben spies was running 3rd . He was constantly putting pressure on Dani.

Just as everyone was settling down in the race A. Dovizioso crashed at lap 3 in middle of the track. He was lucky that he did not get hit by any other rider. Pedrosa was chasing Lorenzo very hard throughout the race. Meanwhile Rossi was on 5th position by now but he was not able to make any major improvements in his lap times. At this point Casey Stoner upped his pace and he was through on Ben spies in 3rd position. Lorenzo was also churning out some fast laps and he extended the gap over 2 sec on pedrosa. All top five riders were scattered according to their positions on track. The Spaniard on Yamaha was looking in total control of the race. The excitement of the race was behind the leaders as a fierce battle was being fought among five riders for 8th position.
Monster Yamaha Tech 3’s Ben Spies just missed the podium in fourth after getting a good start from the front row. Fiat Yamaha’s Valentino Rossi finished fifth and more than four seconds behind the Texan, while Americans Nicky Hayden and Colin Edwards took sixth and seventh respectively. San Carlo Honda’s Marco Melandri secured eighth-place across the line, followed by Paginas Amarillas Aspar’s Hector Barbera in ninth. On his return to racing since he fractured his leg in Germany, LCR Honda’s Randy de Puniet completed the top-10. It was another sad day for Rizla Suzuki as both of their riders crashed and could not finish the race.

Lorenzo was very happy after his 7th win of the season. “Once I got to the front I expected Dani to come with me and I knew it was my moment and that I had to push as much as possible,” Lorenzo said. “I thought he would try to overtake me but I felt good, pushed hard and little by little I was able to lose him. I know I said I was riding for the championship now and that’s still true, but when there’s the chance to win I have to take it! To take my seventh win in one season is fantastic, thank you to all of my team for such a good job after we had difficulties yesterday.”

Page 1 of 2. go to next page for the final results and image gallery.