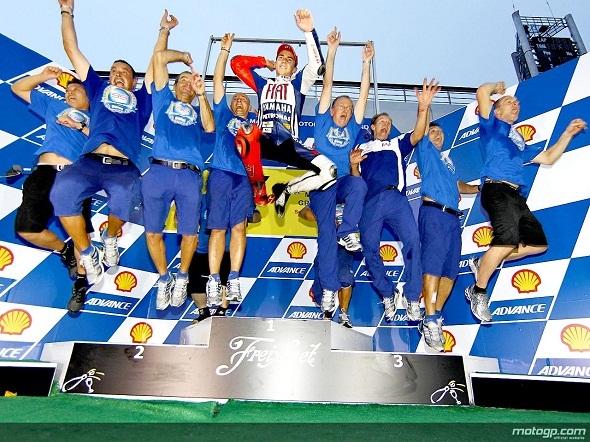 Fiat Yamaha rider Jorge Lorenzo won his first ever MotoGP World Championship title as he rode his Yamaha to claim the final podium position at Shell Advance Malaysian Grand Prix.With Dani Pedrosa missing the race due to injury, the Fiat Yamaha rider, winner of seven of the 15 races so far this year, only needed to claim ninth place to become champion with three rounds still to go. Lorenzo led the early stages of the race before settling for a safe third behind team-mate Valentino rossi(1st) and Andrea Dovizioso(2nd). Rossi stopped to shake hands with Lorenzo as he celebrated on track. Lorenzo held a card saying ‘Game Over’.

It was a thrilling race right from the very start with some dramatic moments. After securing only 6th position in qualifying it was yet another blow for Valentino rossi as he made one of the worst starts of the season. He was running 11th at first lap. But being fastest in morning warm up sessions the doctor knew that he had the pace to join the leaders again. Without wasting any time Rossi was up into 6th position by the end of second lap. Casey Stoner (Ducati Team) suffered a huge disappointment when he crashed out on the opening lap, bringing an end to his race. The sole Repsol Honda rider  Andrea dovisiozo was trying his best to stick with Lorenzo.Soon Rossi moved up into 3rd position as he was racing his way through all the riders. Loris Capirossi and Aleix Espargaro were both unfortunate crashers, whilst Colin Edwards also experienced difficulties that meant he failed to finish.

On lap 9 Dovizioso got better of Lorenzo at turn 1 as Lorenzo ran very deep in the corner. Rossi was in no mood to sit behind his fellow team mate. He immediately attacked him to claim the second spot and set his eyes on Dovizioso to fight for the victory. Meanwhile behind the leaders a fierce battle was going on between Ben spies and Marco Simoncelli. At this point of the race Rossi was riding the wheels of his Yamaha as he registered a series of fastest laps in time sheet.

The two Italians swapped positions a couple of times in what was a thrilling fight to the end. Rossi finally emerged at the top spot finishing 0.224 s ahead of Dovizioso. Lorenzo brought his Yamaha at final podium position.

Both Yamaha riders were very delighted after the race as it was a memorable day for the Doctor as well as he scored his 46th win for Yamaha. “I want to say congratulations to Yamaha and to Jorge; he has been fast all season, at all tracks and in all conditions and he deserves to be the World Champion. This is a wonderful moment for me, I am so happy to win like this and take my 46th win with Yamaha on my M1,” said Rossi. Ben Spies took fourth position with rookie Alvaro Bautista equaling his season’s best result in fifth. Nicky Hayden   and Hiroshi Aoyama followed with Marco Simoncelli finished 6th, 7th and 8th respectively. Marco Melandri (San Carlo Honda Gresini) and Randy de Puniet (LCR Honda) completed the top ten. In Moto2 race the Honda Gresini rider Toni Elias clinched the First ever Moto2 world championship. The dejected rider from MotoGP now is looking forward to join the premiere class once again.