A car that featured in god of cool, Steve McQueen’s 1971 movie ‘Le Mans’ which is still considered as the best racing movie ever made. A car so rare, only 25 were ever made. The Porsche 917K’s pictures have graced walls all over the world, being right up there next to Marilyn Monroe. Those were the times when wallpapers were actually made of paper and the thumb was used to paste some gum, rather than clicking on ‘Use as Wallpaper’. 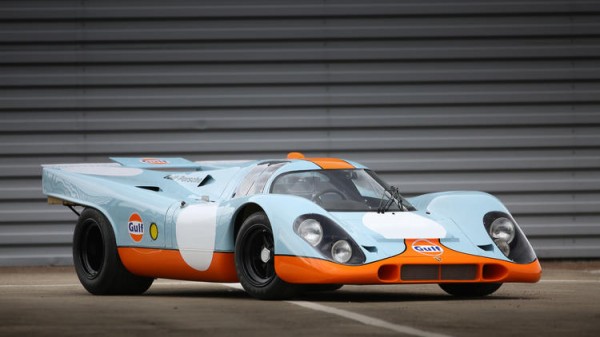 Gooding & Co, an auction house in Santa Monica, California has announced that at it’s annual Pebble beach sale it will be bringing in a 1969 Porsche 917. The car could become the most expensive Porsche ever sold at an auction as lesser examples have changed owners for anything between $10-$15 million. The 917-024 ( 24th in the series of 25), is easily one of the most recognized racing cars in it’s blue and orange Gulf livery.

The Porsche 917 was built in 1969 with the single largest focus to win at the 24 Hours of Le Mans. The car at that time was built using aluminium tubular chassis that was pressurized with gas, which could tell if it ever developed a crack. The initial cars featured a 4.5 liter V12, while the later ones came with a 5.0 liter V12 that pushed 560 bhp via a 5-speed manual transmission. Watch one go around a track, keep your ears open for that glorious engine note.