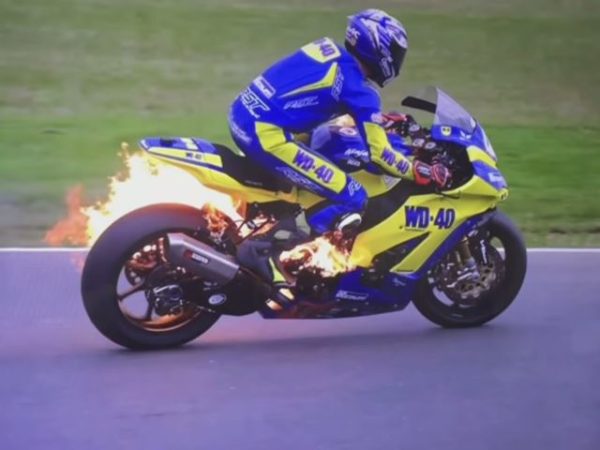 MotoGP riders live in the fast lane and during their high-speed track runs; the last thing a racing rider wants is his racing bike to go up in flames. In the case of British rider Taylor Mackenzie, his Kawasaki took on a whole new meaning to the term ‘Hot Ride’ during the British Superbikes Championship. Mackenzie was almost half way through the race when, without any warning, his Kawasaki Ninja ZX-10R erupted in flames. 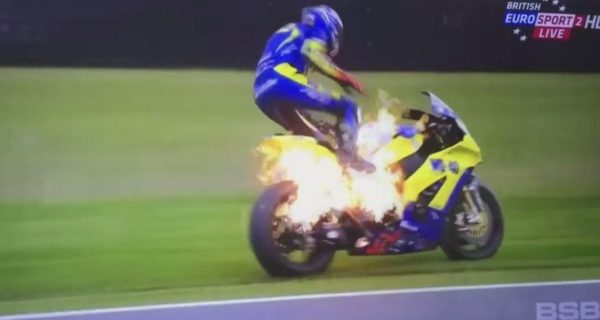 Mackenzie jumps off his burning ride just in time

Unfortunately, one of the fuel lines of Mackenzie’s Ninja ruptured and caused a massive leak of fuel, which then spilled all over the engine and piping hot exhaust. On contact with the hot surfaces, the highly flammable liquid instantly caught on fire. During the video, you will notice that the flames erupted whilst the rider was mid-way through a corner. Mackenzie had anything but a few seconds to react to this ‘hot’ situation. Mackenzie’s racing instincts and quick thinking kicked in, and he safely steered his flaming superbike onto a grassy patch just off the track. 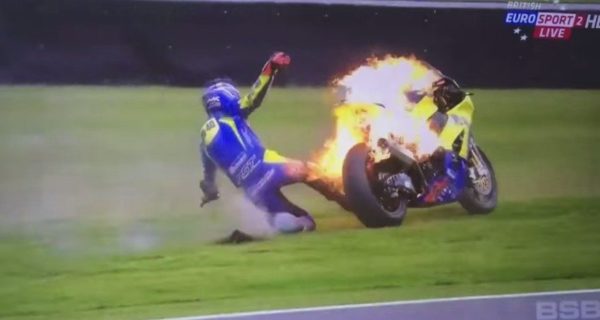 Even Ghost Rider will find that hot!

Even though Mackenzie was wearing his racing gear, he surely felt some of the heat on his rear-end. Thankfully, the rider of the British Superbikes Championship escaped relatively unharmed, though the same can’t be said about his fiery motorcycle. It is rather fortunate that his bike didn’t explode, which wouldn’t have been surprising, given the intensity of the flames.

We have attached a small gallery below for you to have a look at. Also, let us know what you thought about this incident and his amazing escape from the clutches of death in the comments below.