People across the world are furious with errant drivers breaking road rules and causing inconvenience to the fellow citizens. Various campaigns are organised to teach these errant drivers a lesson. One such campaign that grabbed our attention was Russia’s “Stop A Douchebag” movement.

This latest video that emerged from Brazil is not part of any campaign. But it sure would make disobedient drivers think twice before breaking the law and especially before parking in the handicapped space. As seen in the video, a red hatchback, that was wrongly parked in the reserved space for handicapped drivers, has been covered with blue sticky notes. The creative protesters also made a handicapped sign using white stickers. The furious owner tries to remove the stickers from the windshield and window glass in order to drive away while people record the humorous event. 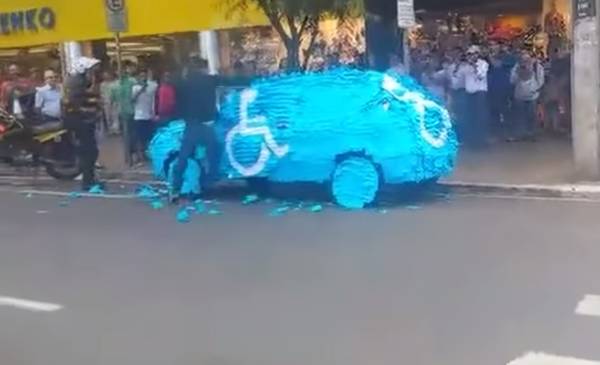 The furious owner tries to clear the windshield of his car. Imaging what would happen if we start doing something like this in India!

Folks at Autoevolution also report that the owner of this car got involved in a crash as the stickers made it difficult for him to see the surroundings and also because of his furious and aggressive driving. Its is reported that the driver is permanently injured. Well, he can now legally park in the handicapped space. We also concur with the comment on YouTube and by Autoevolution about the low quality footage. Seriously guys, this is 2015!

Here is one more footage of the incident:

Can you think of a better idea to teach such errant drivers a lesson? Share your views with us through the comments section below.