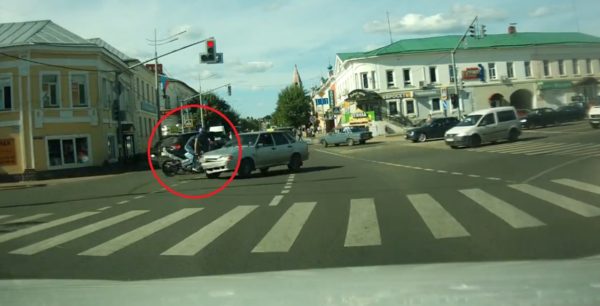 Russian vehicles are rigged with dashboard cameras to have a first-hand account of traffic collisions that helps the driver tackle the legal hassle from the law enforcement system. Every once in a while, a dashboard camera footage catches everyone’s attention and the video goes viral on social networking websites.

One such dashboard camera footage from Russia recorded an motorcycle accident where the rider had a real close shave with death as he rammed into another car. While the rider escaped, the accidental somersault caught everyone’s attention. Some even went to the extent of calling him Spiderman or a Ninja. Now, a new footage of a motorcyclist accidentally landing on the rooftop of a car has emerged from the land of Kremlins.

Check out the video:

As seen in the video, a motorcyclist runs into an oncoming taxi, somersaults and lands on the roof of the vehicle. The rider seem to have avoided any sort of an injury as he jumps down from the roof of the car. We are not accustomed to the traffic rules of Russia hence we really cannot figure out who was at fault in the accident. 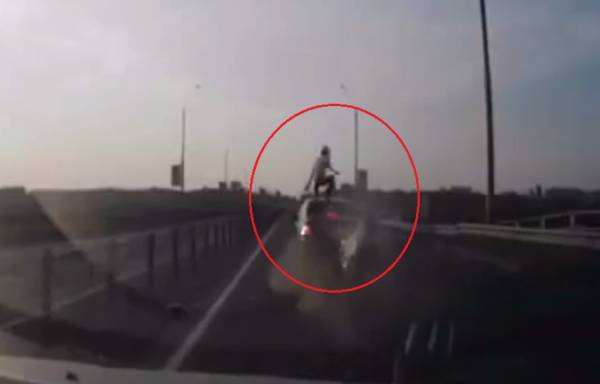 Here is the footage of the original Spiderman from Russia:

Motorcyclists tend to face severe consequences in road accidents as they are not cocooned in a protective shell like a car driver. Hence, it is more crucial for a motorcyclist to keep maximum attention on the road and other vehicles on the road.

What measures do you follow while riding your motorcycle? Share your ideas with us through the comments section below.