Home BMW Wireless Charging for EVs being developed by BMW

Wireless charging technology for EVs and hybrid vehicles is being developed by BMW. This will allow such vehicles to be charged without the need for being plugged in to a charging outlet. 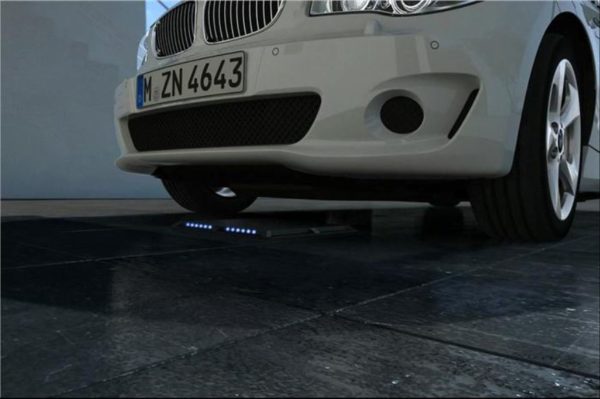 The technology is being developed as a joint venture project with Daimler. Aimed at making the usage of Electric Vehicles and Hybrids more convenient, this development is indicative of the widening presence of electric vehicles. And that presence is probably supposed to become larger, as the clamour over pollution due to fossil fuels increases. The threat of an energy crisis also looms large. It was only a few days back when we had reported about Toyota working on a similar project for its Prius. Nissan is also dedicating its manpower and resources in the same direction.

The new wireless charging technology will involve a base plate embedded in the ground. The base plate will be the component responsible for charging the batteries of the vehicle. It will have a coil placed inside it, with another similar coil being present in the car. The base plate will set up an alternating magnetic field which will transfer electricity. The rate of transfer of electricity will touch 3.6 kWh. BMW claims that their i8s will be brimming with charge in just under two hours.

All the driver needs to do is simply glide the car and position it over the base plate. A Wi-Fi connection will be needed to establish the connection between the coils present in the car and inside the base plate. Then, the wireless charging process can be started by the push of a button from inside the car. While the technology is still in its nascent phase, BMW feels that it will be capable of handling larger batteries. The EV and Hybrid scenario is bound to change, and batteries with higher capacity will be one of the major players in this.