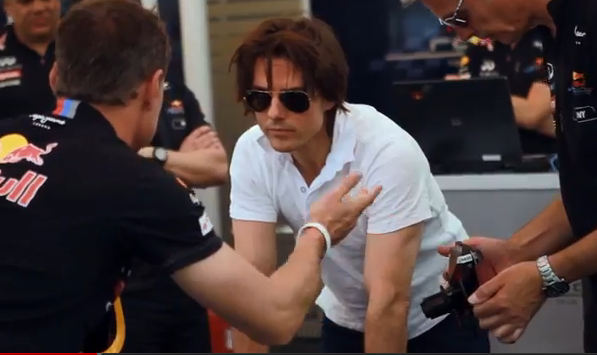 The last I saw Tom Cruise driving off the big screen was when he drove the ‘reasonably priced car’ on the Top Gear track. And man, did he drive it well! For those who have not seen that clip, you should search for the video online, and have a look at it. The Mission Impossible star made his lap look like some kind of a cash scene from one of his action flicks. On the penultimate turn the action hero took the corner with only two wheels of the car on the tar. The visual was simple incredible! Tom also went on to register the fastest lap by any celebrity at the TG track with his performance.

The man has a thing for adventure. He proves it further by taking to the wheel of the Red Bull F1 car, and from what the visuals tell us he was pretty good at it. It went a bit awry towards the end California’s Willow Springs raceway though as Mr. Cruise got carried away and lost control to do a bit of off-roading. Like piloting an F1 car on and off the road wasn’t enough, in true Top Gun style, Tom hitched a ride in a Red Bull stunt helicopter and accompanied the daredevil pilot for a horizontal roll as well as a full 360 degree loop.

Have a look at the video to see what we’re talking about here!