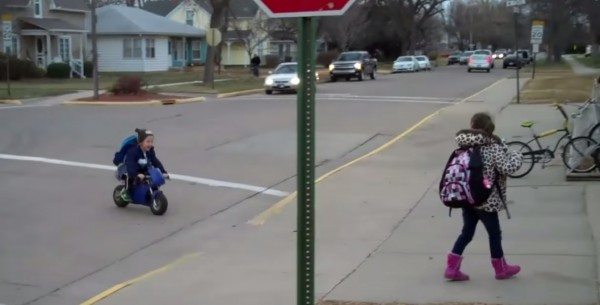 This video will definitely rekindle a lot of imaginations we all had as kids. However, the young ones in this day and age don’t like taking things lying down. If there is an imagination, they ensure it comes to life. As toddlers, while all we could do was ride a three wheeled scooty to impress that curly haired girl with a dimpled smile, here’s someone who rides his motorbike to school, says hello to his slightly older friends and even parks his wheels in style.

Apparently, the little guy had been doing it for a few weeks, riding through many blocks and crossing intersections, all by himself. While his supportive guardian did support the son’s daredevilry, the school principal had to put an end to this, as many worried parents feared for the little one being run over. On a serious note, passing on your love for motorcycles over to your kids at an early age is cool, but ensure they wear enough safety gear and make you proud in an enclosed space.