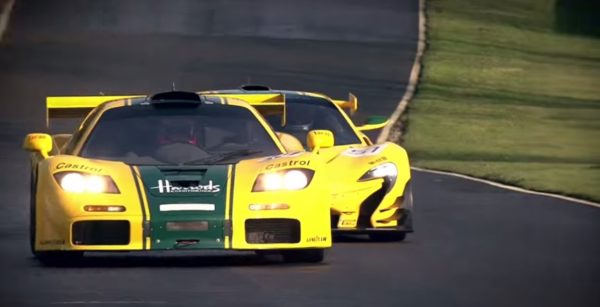 McLaren seems to have found a solution to the popular paradox, what happens if an unstoppable force meets an immovable object? They got two of their extreme machines to meet each other, a McLaren F1 GTR, which occupies immovable space in history’s book of speed, and their latest, the P1 GTR, which combines all modern day voodoo to produce 986 bhp of time travelling thrust. Propulsion that makes the soul behind the wheel encounter an out of body experience, where even the brain refuses to interrupt and put a stop to things.

The McLaren P1 GTR, finished in a livery inspired by one of the most iconic colour schemes of modern-day motorsport, pays homage to a car which has reserved its own place in history – the yellow and green McLaren F1 GTR, chassis #06R. The McLaren P1 GTR will make its global debut alongside the recently announced McLaren 675LT on Tuesday, 3 March 2015 at the 85th International Geneva Motor Show.