Home Features Video: Everything about the 2015 Yamaha R1M explained in motion 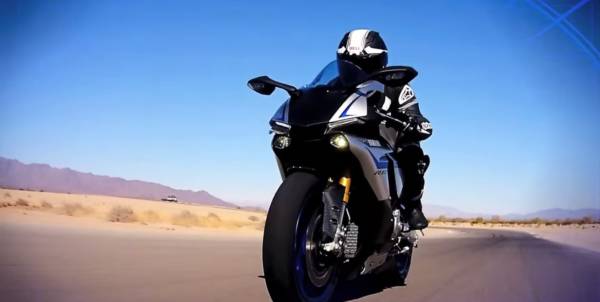 One of the most awaited new super bike this year has to be the 2015 Yamaha R1. Loaded with tech and features derived from Motogp, the more focused, track oriented R1M should help the Japanese manufacturer make a strong comeback in the litre-class game. Boasting of many firsts, the R1M is equipped with wizardry like slide control, variable traction control, lift control, electronic suspension and a communication control unit, which works together with a GPS antenna. It records lap times and track mapping and enables the rider to download the information later, even allowing changes to be made to the R1M directly from an Android or iOS app. Yamaha says their development team has been able to create a new kind of a motorcycle that should transform the sport bike world and showcase their vision for the future.

The 2015 Yamaha YZF-R1 gets a 998cc inline 4-cylinder engine that produces 200PS of power with a newly designed crossplane crankshaft.  The YZF-R1M, which is a track only variant of the YZF-R1, gets the same powermill but with a list of sophisticated equipment including, carbon bodywork, a Communication Control Unit (CCU) and high-specification Bridgestone tyres. The YZF-R1M will be a limited production motorcycle and only 500 examples of the same would be made.