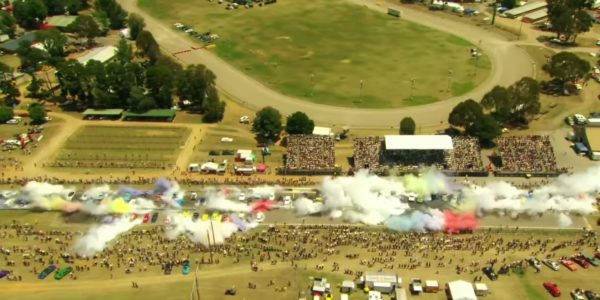 While we were busy washing away the not so good times of the previous year on the 31st of December and trying to cure a hangover the next day, a few crazy folks in Australia decided to burn their old rubber in grand fashion. A hundred and three cars at Summernats 28 in Canberra got together and smashed their tyres to smithereens at what they call the biggest horsepower party that happened down under. At the same time, they also ended up creating the Guinness world record for the largest simultaneous car tyre burnout!

As each one of the 103 motors came to life, the spectators and the entire area was engulfed in some holy smoke within a few seconds. In a silly manner though, people are seen busy pointing their cell phone cameras at the cars, when all that they could capture was just some smoke. We’re sure if not the sight, the aural and olfactory experience must’ve been a great way to kick off the new year.