Boats hardly ever appeal to those seeking extreme thrill, excitement and verve. The statement holds even truer for those enamoured by fast-moving exotics on four wheels. However, there is a company in Austria which came into being in 2010 and thinks that it’s got the right machine to cure your illness of boredom on open water. Their invention is called the Kormaran and it can transform itself into four different boats, depending on your mood. Each configuration permits the user a different way to traverse the water’s surface. 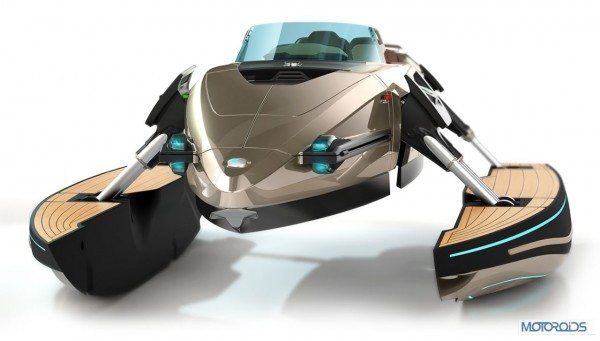 The Kormaran is a three-seater convertible luxury boat which measures 23 ft (7 metres) in length. It was designed to be 4 different boats in the body of one and makes extensive use of carbon-fibre for most of its construction, but also uses some titanium. Powering this vessel is a 493 horsepower motor that uses triple jet-propulsion for greater thrust. Thanks to the extensive use of carbon-fibre, the Kormaran only weighs 1.5-tonnes. The light weight helps this boat to be efficient and quite brisk at the same time. It’s birthplace is the city of Salzburg in Austria and is technically, still a prototype. All the transformations are courtesy of some powerful electronically controlled hydraulic arms. These arms are what make the Kormaran such a versatile and futuristic vessel. The first configuration this sci-fi boat can take is called the monohull. 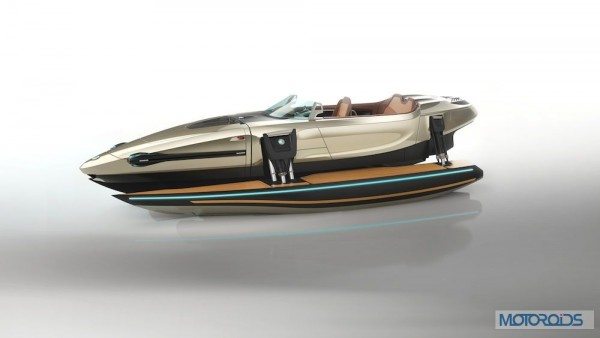 In its monohull mode, the Kormaran looks like a supercar without its wheels.

In this form, the Kormaran isn’t very different from normal boats. In layman’s terms, monohull means that there is just one single surface of the vessel that’s touching the water. This is what most boats and ships have and provides for quick manoeuvring on water. When in its monohull form, this boat is only 1515 mm wide, much narrower than your average family hatchback. This narrow profile comes in handy when the Kormaran needs to tread through crowded harbours and narrow lakes/rivers. This configuration also allows you to cruise comfortably, for the times when you want to take the slow lane. But what if you are in some open waters and you fancy going a bit faster? This is when you push a button and the monohull Kormaran transforms, as if by magic, into a catamaran – its next form. 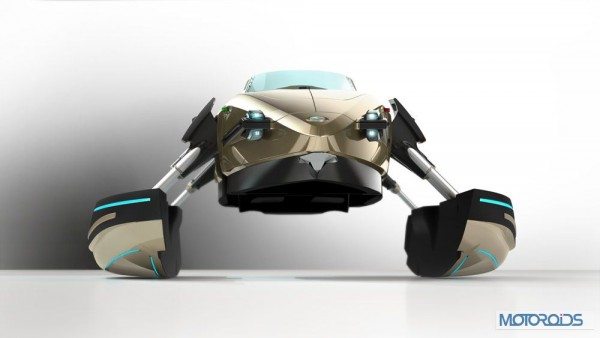 Yep, it is still the same boat. It’s just got a ‘lift’ and has become a catamaran.

At the press of a button, the monohull of the Kormaran transforms into a dual-hull catamaran. This mode is for the times when you are bored of relaxing and want to stretch the Kormaran’s 493 horsepower engine. As we mentioned earlier, the Kormaran is built using lightweight carbon-fibre and the combination of power and lightness, pays dividends when you mash the throttle. This boat can do a top whack of 70 km/h (44 mph) and for a boat, that is pretty quick. Even when you keep the throttle firewalled, this boat wouldn’t run out of fuel very soon and will still cover 200 km (108 mi) before needing a refill. 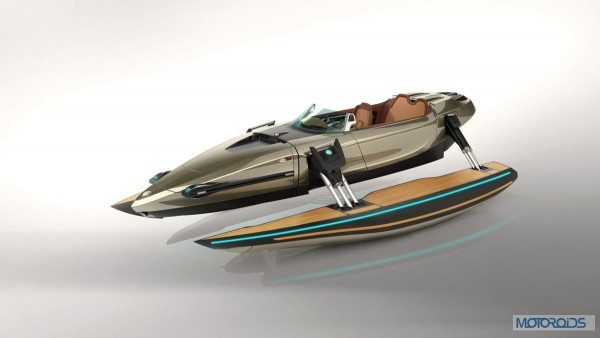 In its catamaran mode, the Kormaran can hit 70 km/h.

In this mode, the Kormaran’s main central hull is suspended in the air and the whole boat is supported by the dual-hulls, thus reducing the overall drag. Thus allowing higher speeds and lending the Kormaran with greater stability. The transformation takes the help of electronically controlled hydraulic arms on either side of the boat. These arms stretch out and extend the total width of the whole vessel, making it wider than a Range Rover. This extension in width results in increased poise even at top speed. The components of the hydraulic arms are made out of stainless steel and titanium, which means that they are both strong and light. But there is one more high speed configuration of the Kormaran which is even more sci-fi, it’s called the Flight Mode aka hydrofoil mode. 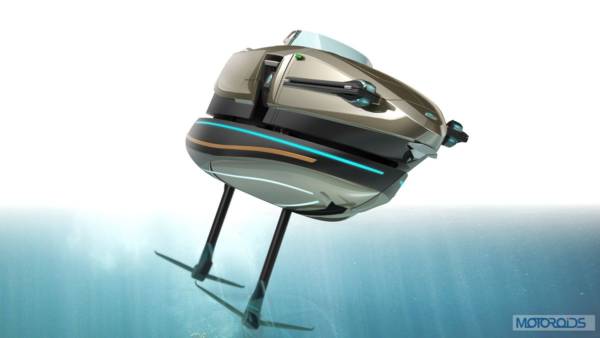 The Flight mode or as we call it, the 007 mode gives this boat wings. Literally.

The Flight mode can be deployed only when the Kormaran is in its monohull configuration. In flight mode, the entire hull of the boat is lifted out of the water by two hydrofoils that are deployed from underneath the boat’s hull. Hydrofoils are like the wing on an aeroplane and in essence, help lift the main body of the boat out of the water. Thus reducing drag and increasing the speed and efficiency. The Kormaran can hit its top speed in both, the catamaran and flight mode. 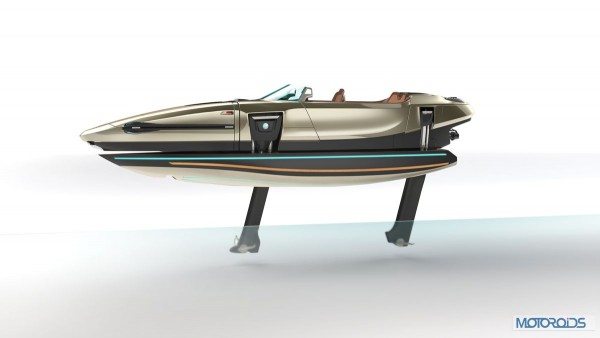 However, what if the waters get choppy and unsuitable for high speed boating? Now you want a boat that’s more stable in inclement conditions, speed isn’t the highest priority. 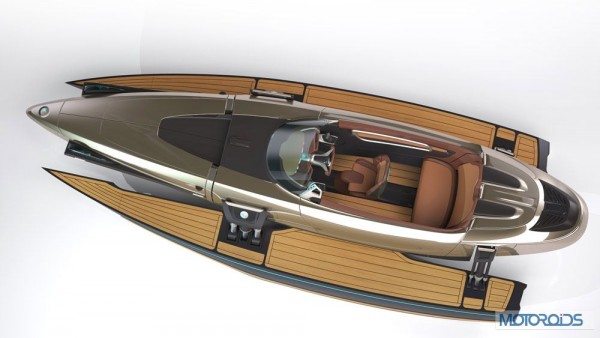 Press a button and the hydraulic arms lower the central hull and thus make the Kormaran into a trimaran. At over 3.5-metres in width, the vessel is now wider than a medium sized city bus. Even in this configuration, the Kormaran can still go fast, but the total range is affected because of the increased drag fuel consumption. That said, the boat is now even more stable than before. However, the most suave mode of this boat becomes visible when it’s not in motion. 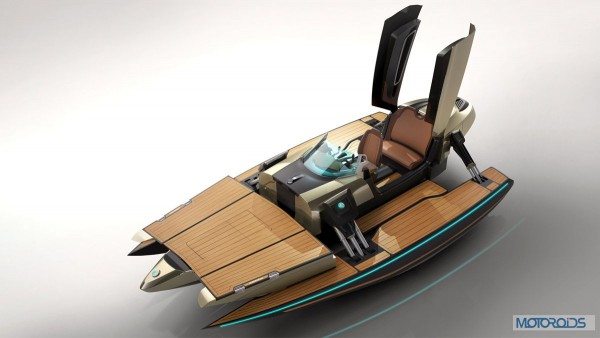 Yes, it’s got swing-wing doors like a Lamborghini. You can also see the passenger seat behind the driver’s.

The best party trick of this mode is that the front of the boat can be made into a sun-bathing deck. Also, this boat has the best set of doors on any boat, probably. They are similar to the ones found on some supercars and swing upwards, being hinged to the rear of the boat. The front of the Kormaran houses foldable teak wood panels which can be opened up and form the perfect surface to relax on, or a platform from which you can dive into the water for some swimming. This mode is called the Bathing mode and is for the times when the Kormaran is anchored in one place, obviously. 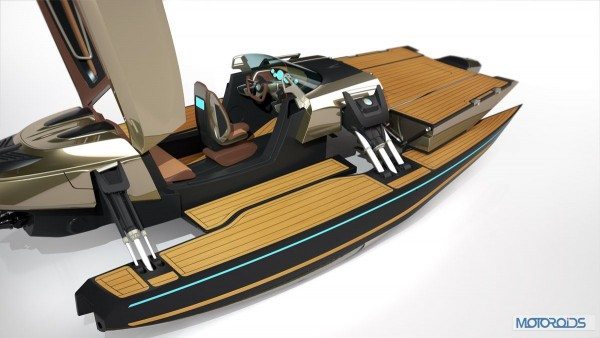 This boat uses the colour turquoise for most of its lighting and displays.

Most of the lighting on and in this boat, uses the colour turquoise. There are even thin lighting strips that use turquoise illumination and make the Kormaran visible at night. Apart from that, there are also some headlights and position indicator lights. These lights are mounted on the left and right side of the boat, and use red and green lights, respectively. These position lights are meant to alert other sailors to the Kormaran’s direction of travel. It also has underbelly illumination, perhaps for fishes that are afraid of the dark. 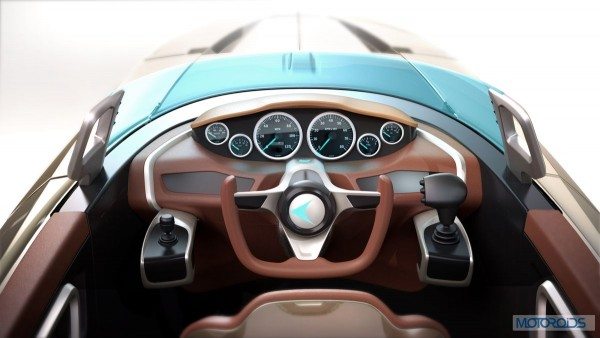 The cockpit of the Kormaran doesn’t look very space age. 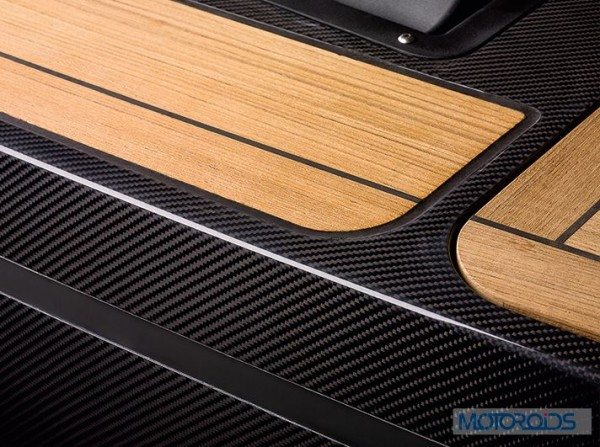 Loads of carbon-fibre and expensive teak wood adorn the Kormaran.

So, do you want a Kormaran for yourself? Well, there is one catch, though. The Kormaran isn’t yet production ready and whenever it does come on sale, you can bet that it wouldn’t be a bargain. The Austrian company has apparently invested millions of euros behind this beautiful project and they would likely demand a huge premium for one of these. If the Kormaran convertible luxury boat does become available, we hope many buy it and make our waterways look that much better to look at.