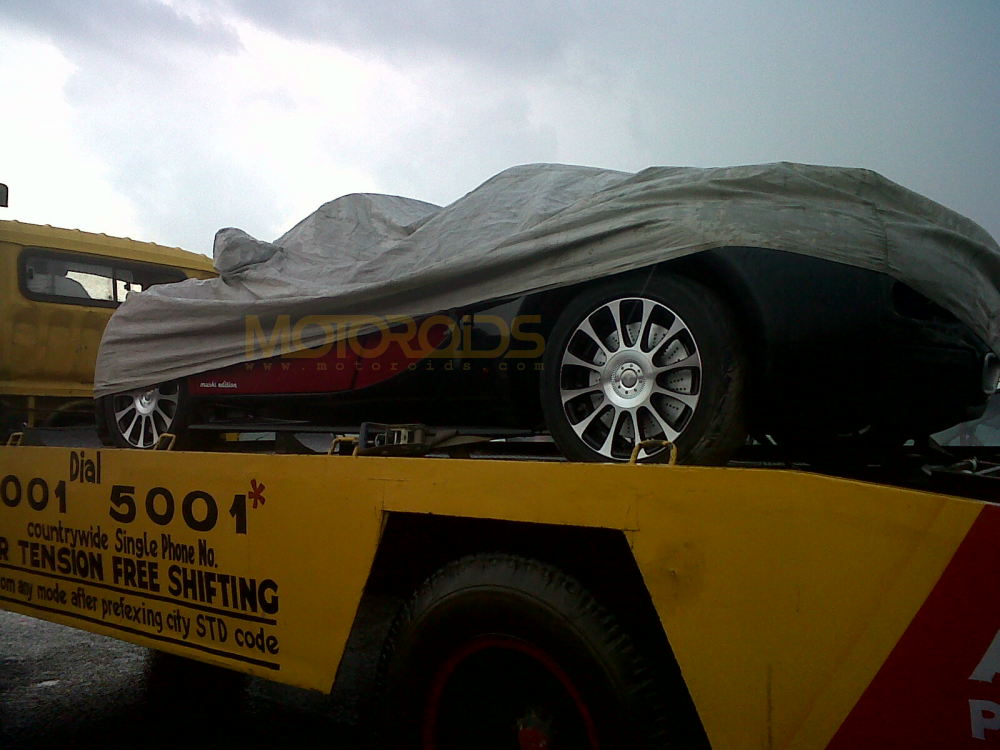 Edit: Apparently this car is not an original. A kitted out car. The size of the car, the wheels and the tyres according to the photographer, didn’t quite match the hefty proportions of the original.

This is one of the rarest of the rare sights in India. Being able to spot the world’s fastest car, the Veyron, and that too, in the roadster form, (Grand Sport) is quite a feat. Our old time friend and former colleague Bunny Punia managed to spot this exotic on his way to work somewhere close to the Gurgaon toll plaza. The car was being transported to someone’s residence, or probably the garage after a thrilling drive.

The Veyron Grand Sport is the roadster version of the world’s fastest car, the Bugatti Veyron. Powered by an 8-liter gasoline engine, the car boasts an incredible 1001 bhp of peak power at 6000 rpm and peak torque rated at 1250Nm between 2200 to 55000 rpm. The engine is mated with a specially developed 7 speed DSG gearbox, strengthened specially to handle the fury of this monster. The car’s top speed is rated at 407km/h and it can accelerate from 0-100 km/h in less than 2.7 seconds.

As for ‘Kitna deti hai’, the Veyron will go 4 km per liter (highway + city),  2.38 kmpl (city only) and 6.41 kmpl (highway only). These are the official figures, so expect the real world numbers to be even lower.

The Grand Sport’s components are all made of super exclusive stuff – titanium, carbon fibre, magnesium, aluminium – each component is made of the material with the lowest weight and the highest level of functionality. This is also true for the chassis safety features. The Grand Sport’s body consists of a carbon fibre monocoque suspended from an aluminium frame in the front and a carbon fibre/stainless steel frame in the rear.